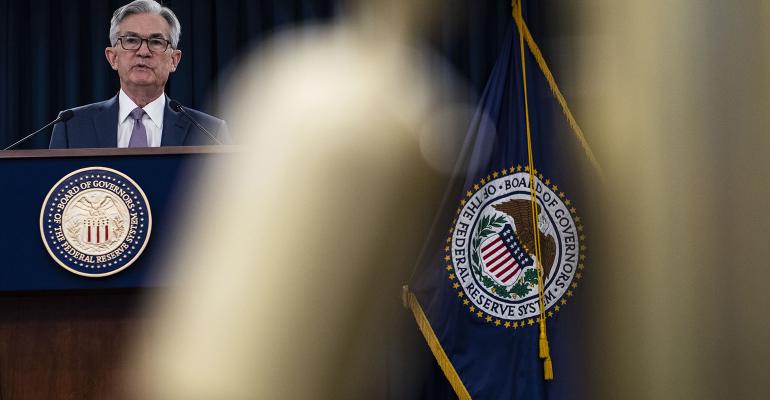 Fed Should Resist Market Pressure to Do More

The consequences of additional action outweigh the potential benefits.

(Bloomberg Opinion) -- In listening to market chatter urging the Federal Reserve to do more, I’m reminded of two simple insights I was exposed to years ago that have stayed with me. They don’t help predict what the Fed will end up doing, but they help shed light on the possible consequences.

Early on in my career at Pimco, I remember Bill Gross, the firm’s founder and legendary investor, reminding portfolio managers that “there are times when the best thing to do is to do nothing.” It’s important advice as most PMs are conditioned to continuously look for opportunities and react accordingly. They naturally get fidgety when market conditions dictate that the best thing to do is simply wait. The cost of ignoring Gross’s advice ranges from unnecessarily wasting money on bid-offer spreads to ending up with less-optimal portfolio positioning.

Gross’s advice should be heeded by Fed officials who are under pressure by markets to do more, including some combination of negative interest rates, yield-curve control, larger asset-purchase programs and more aggressive forward guidance — all of which, from a narrow market perspective, would help push even more investor money into risk assets such as stocks and high-yield bonds, thereby pushing their already elevated prices even higher. Yet there are few, if any, valid economic policy reasons to do so.

Market functioning: After notable disruptions, U.S. financial markets are liquid and functioning well because of the Fed’s emergency policy interventions, which, as Chair Jerome Powell acknowledged last week, “crossed a lot of red lines that had not been crossed before” as the central bank found itself in a “situation in which you do that, and you figure it out afterward.”

Market volatility: Government interest rates have been rather range bound in recent weeks with the 10-year yield ending May broadly unchanged from a month ago. The portions of the yield curve that the Fed can more easily influence have also been well behaved. For example, the spread between two- and five-year Treasuries, the so-called 2s-5s, is at a comforting 14 basis points. And all this comes in the context of record borrowing by the government and also record corporate bond issuance by investment-grade companies.

Credit flow: Most companies with capital market access have had no problems issuing bonds. In fact, at more than $1 trillion, the pace of issuance the last few weeks has been the highest on record. Moreover, this issuance has been undertaken at a relatively low cost given both repressed Treasury yields and risk spreads.

Economic activity: While the economy is challenged in multiple ways, it’s hard to argue that this is due to financial conditions that the Fed influences. Consider housing as an example. As noted by the St. Louis Fed, the average rate on 15-year fixed-rate mortgages was at its lowest level (2.62%) since May 2013.

Having said that, the Fed could well be tempted to do more anyway on the view that it is essentially a free option. This is where the second bit of advice that I received from a foreign minister in the 1980s comes in. When I pressed him why he hadn’t reacted with force to a provocation from a hostile government, he responded, “Be careful when taking an action that risks unintended consequences and is not easy to reverse.”

By continuously intervening in market pricing or taking policy rates negative, or both, the Fed would risk creating not just additional distortions but also “zombie markets” — that is, markets that no longer send accurate price signals and that fail to play an efficient role in mobilizing and allocating capital. This undermines productivity, hurts the potential for growth and risks financial instability.

By contributing to higher wealth inequality and dragging the Fed deeper into “quasi fiscal” funding operations, the central bank also risks its credibility and political autonomy. It would also be reinforcing the markets’ belief that they have been empowered to lead rather than follow the Fed. And, based on the experience of the last few years, whenever the markets get concessions from the Fed, they press for more, even when the concessions exceed their expectations.

Using the phrase coined by Chris Dialynas, my friend and former Pimco colleague, there is also the “no exit” issue — that is, the inability to go back as the risks of doing so appear high. Some already think that the European Central Bank has fallen into a deepening lose-lose-lose situation: Notwithstanding growing signs of the damage being caused, it is unable to get out of the current negative interest rate policy paradigm lest it disrupt market valuations and undermine an already-worrisome economic outlook; it is challenged to go further with unconventional monetary measures given mounting evidence that the potential costs and risks of doing so exceed the likely benefits; and its current situation is uncomfortable, exposing the central bank to a range of political, legal and economic criticisms.

In sum, the Fed would be well advised to ignore the calls for it to do more other than getting its Main Street lending program operational as quickly as possible. This does not mean that there is no need for policy actions, or that the Fed may not need to be more engaged down the road.

For now, the policy priority now rests squarely with Congress and the White House and includes:

None of this means that the Fed’s policy work is done. Central bank officials should continue to monitor carefully the functioning of markets and economic activity, including through the use of an expanded high-frequency data set. They should also be working on two policy scenarios: how to normalize financial conditions in an orderly manner and how to support Main Street without damaging the functioning of markets or elevating asset prices to even higher levels. Beyond that, standing pat is most likely the best call for now.