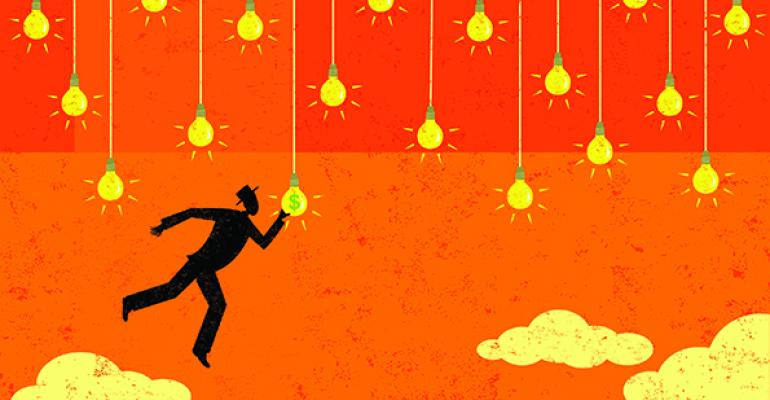 With interest rates at floor level asset managers have ratcheted up their search for yield with alternative income funds. Which ones are best?

Question time: When’s the last time you saw a 13-week T-bill yield with a handle that wasn’t a zero? Need a clue? Think of the current occupant of the White House. Remember when he earned the lease? Yup, November 2008.

It’s been seven miles of bad road for cash returns ever since.

Income fund manufacturers have (excuse the expression) “cashed in” on the lousy yield environment. In the wake of the rate plunge, these asset managers have launched a raft of new funds aimed at yield-hungry investors. Among them are alternative fixed income portfolios that invest in coupon securities from nontraditional issuers. Others are known, for lack of a better term, simply as alternative income funds, and buy noncoupon paper such as floating-rate notes (FRNs) and master limited partnerships (MLPs).

Each fund category produces a unique income stream and offers an idiosyncratic diversification benefit. The distinction is palpable, as you can see in the recent REP. mid-year review of alternative funds. Seasoned alternative income funds comprised the only segment out of a dozen that produced positive alpha in early 2015.

With rising interest rates on the horizon, investors and advisors are pondering the ability of alternative income funds to keep producing better-than-average yields with less-than-average risk. Of course, that depends on the investments made by each fund.

If you’re yield-hungry, nothing quells your craving better than funds that invest in master limited partnerships in the energy sector. Energy MLPs and MLP funds were the rage during the fracking boom, but a precipitous slump in oil prices last year has given investors a bit of indigestion. 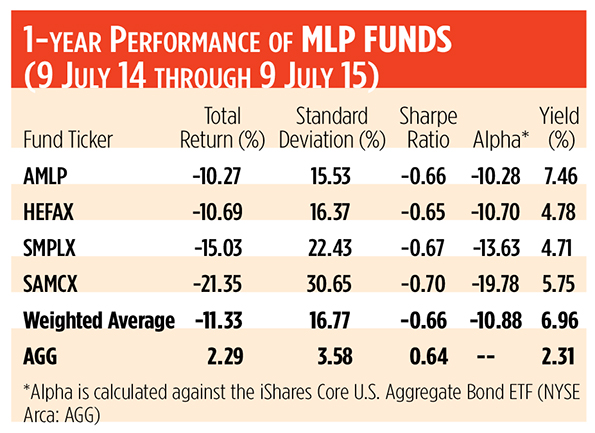 AMLP offers a best-of-class 7 ½ percent yield at a cost. The reported annual carrying expense is an eye-popping 5.43 percent. Only 85 basis points of that is the ETF’s management fee, though. The balance is deferred income tax expense.

Partnerships offer a more-or-less direct flow-through of income and tax liability, but because AMLP is structured as a C corporation, the fund takes care of the partnership tax issues and passes through tax-deferred distributions as dividends to investors. The fund adjusts its net asset value to reflect the deferred tax liability.

Going forward, you have to be confident of rising oil prices for MLP funds to make sense, especially for conservative portfolios.

The appeal of floating rate notes and funds has soared as investors anticipate the withdrawal of accommodation by the Fed. The interest paid on FRNs adjust periodically, typically every 30 to 90 days, based on a reference rate. For corporate FRNs, resets are usually based on the London Interbank Offered Rate (Libor) plus a predetermined credit spread. A note, for example, carrying an “L+150” legend would reset to the current Libor rate plus 150 basis points (1.5 percent). The size of the credit spread reflects the creditworthiness of the borrower, and the quality of the collateral and the nature of the loan covenants.

Corporate FRNs are often referred to as “senior debt” because the lender typically has a claim on corporate assets superior to those of bondholders and stockholders.

Last year, the U.S. Treasury began issuing its own FRNs with rate resets based on the discounts at 13-week Treasury bill auctions. 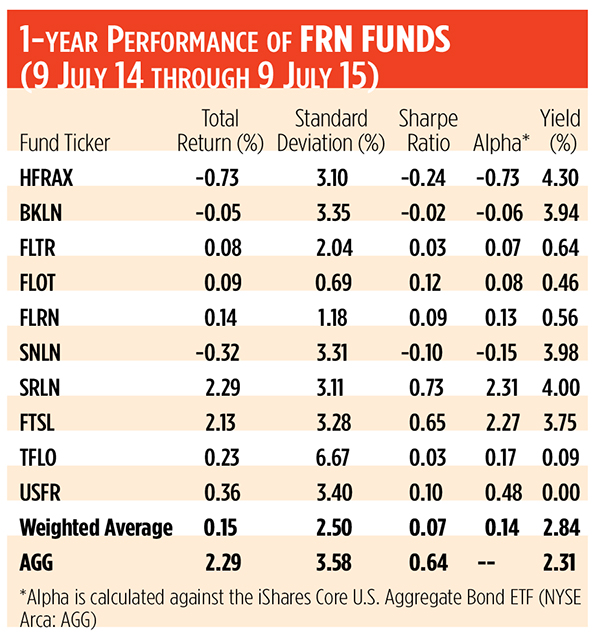 The wide dispersion in returns seen in FRN funds is attributable to the type of notes held in portfolio. Not surprisingly, the payouts on Treasury FRN funds are quite low, reflecting their low risk. Two funds, the iShares Treasury Floating Rate Bond ETF (NYSE Arca: TFLO) and the WisdomTree Bloomberg Floating Rate Treasury ETF (NYSE Arca: USFR), launched on the same day in 2014, compete head-to-head for very small market shares. TFLO has an edge, though: It owes its positive yield to a management fee waiver. For now, TFLO is free to hold.

The behemoth among the corporate FRN funds is the $5.4 billion PowerShares Senior Loan ETF (NYSE Arca: BKLN) which has sucked up 81 percent of the segment’s assets. BKLN tracks the 100 largest bank loan facilities, all of which have a credit spread of at least 125 basis points. About 90 percent of its portfolio is below investment grade, making credit risk a concern going forward. If interest rates were to spike upwards, borrowers could have trouble servicing their debt.

While the yields on FRN funds lag behind those of the MLP portfolios, the floaters have managed to eke out a smidgen of positive alpha, due mostly to their modest volatility. Generally speaking, the shorter the average duration, the lower the volatility and, in turn, the lower the risk.

Funds pursuing absolute return strategies are led by the $20.3 billion JPMorgan Strategic Income Opportunities Fund (OTC: JSOAX). The fund, true to its name, is opportunistic. Fund runners invest in a broad array of fixed income securities, and employ a number of diverse strategies including the use of derivatives.

Among seven funds in the segment, only the $266 million VRP portfolio has produced positive alpha over the past year. That, combined with the fund’s positive total return, high yield and low duration risk, make it a good prospect for a rising rate environment. 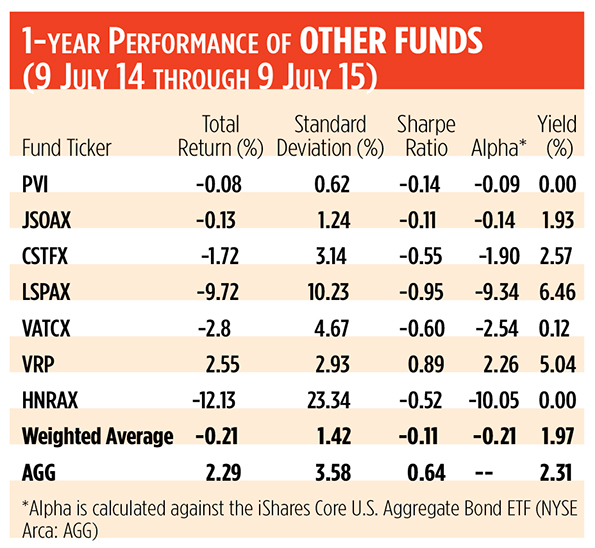 British scientist Richard Dawkins once opined, “People believe the only alternative to randomness is intelligent design.” Clearly, some alternative income funds seem better designed to deal with market vagaries. The best bets are those portfolios attuned and adjustable to current interest rates. But, as we’ve seen, there are alternatives within alternatives. Selection of the “right” fund remains a very personal decision.