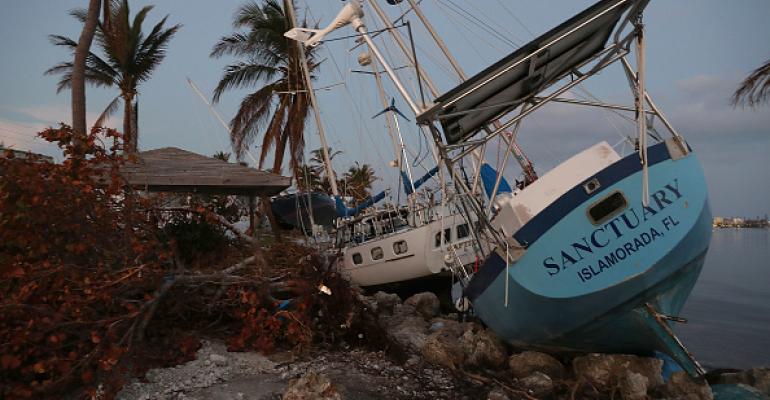 Hurricanes and temptation to buy the dip.

This is almost easy.

In the wake of a partially disastrous nonfarm payroll report and the market’s ready dismissal of the weak components, I have to veer to the downside for the market. Simply, we know the NFP was adversely impacted by the storms, and you can hardly blame forecasters for the big miss—a 40,000 decline vs. expected 75,000 gain—when they hold their finger up to hurricane force winds. (Sorry, couldn’t resist.)

Related: When Do We Stop Listening to Janet Yellen?

Still, the report has some bearish influences, though those, too, must be a bit suspect. Average hourly earnings were strong, participation rose (making the fall in the unemployment rate all the more impressive), even as the household survey shows a 547,000 drop in the  pool of available labor but a 906,000 gain in employment. Wow. Still, be careful on those wages; the big drop was in poor-paying jobs (Leisure/Hospitality down 111,000, that surely skewed wage gains to better-paying jobs).

The key takeaway is that the market has been under pressure, and there’s nothing in last week’s NFP data, or Fedspeak for that matter, to suggest that the pressure is misplaced. So, the December hike is very likely on. I won’t argue. I’m “letting” the selloff go further.

I’m a bit surprised that the curve is steepening into such an event. Technically, that makes sense, but again, it’s into anticipating a Fed hike. Some of the curve valuations are getting stretched, meaning near oversold conditions, but then that may be a function of positions; speculators are short the frontend and long the backend per the Commitment of Traders data.  Tax reform started the process and that also remains a key factor, probably more important than the Commitments of Traders Report data.

Where to? 10-year yields have recent highs near 2.42 percent, which is hardly a reach and not much support over that until 2.50-54 percent. Something of a bear flag/pennant is going on that also suggests an approach of that 2.5 percent. It’s not so perfect a pattern to give me a more specific level, but it’s bearish enough to anticipate a break of 2.42 percent.

Fives have a bit of support up near 2.05 percent, and show a divergence favoring lower yields. I’m suspect, but keeping an eye on the situation. Against 2s and10s they are looking decidedly oversold—watch recent support near 10 basis points on the fly. Twos have trendline support at 1.54 percent and, like 5s, show oversold momentum measures and a divergence that tempts me to buy the dip.