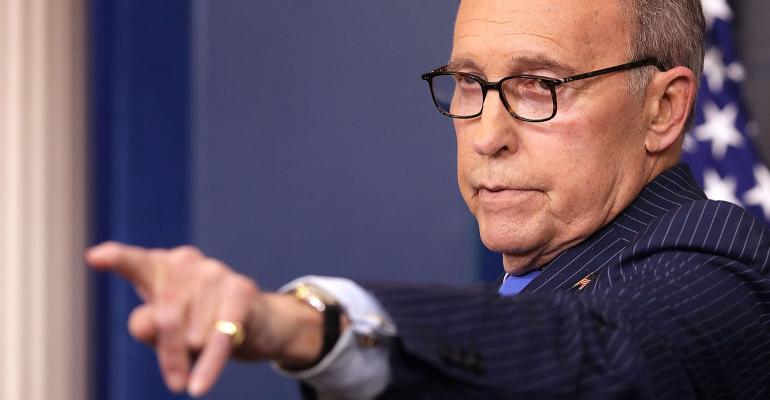 In the spirit of making mountains out of molehills, I’ll make note that the range in yields set on June 27 pretty much contained the range in the Non-Farm Payroll report. That day, you will recall, the yuan got hit and more emerging market jitters came into play to provide Treasurys with a bull flattening that won’t go away.

The curve continues to show something very interesting. In advance of NFP, 2-Year Treasurys are up about 4 basis points since June 27, 10-Year Treasurys are in the middle of that narrow range and 30-Year Treasurys are just a bid outside, lower in yield, and just under their 200-day moving average. While I grant it’s a hot, sticky, start to the quarter, in/out days for the start of summer breaks and there’s been no great data or shocking events on the trade front, this behavior is important.

It could be about month- or quarter-end moves. It might involve some issuance in the under-10-year sector. It also has the potential to be meaningless entropy in the context of illiquidity around a holiday week. Then again, it’s the trend and I think it speaks to that reality. I bring a lot of it back to the Fed. I also want to point out something that could be totally useless speculation—Larry Kudlow’s remarks urging the Fed to go “very slowly.” What’s that all about?

Perhaps he’s referring to the concern that even after the tax cuts and input of stimulus the economy needs low rates, at least as far as the Administration is concerned, which is hardly a surprise. To be fair, Kudlow has said before that growth doesn’t cause inflation, which surely is true for a while, but then with the current level of unemployment and all that stimulus you’d think he’d be a little more circumspect. I don’t doubt he’s merely talking the Trump line and saying all he can to foster ongoing support for the economy, whether it be taxes or low rates, and will find something else to blame should inflation heat up. Still, I wonder if it reflects an underlying concern about the economy needing low rates.

Less than a year ago Kudlow opined: “More growth, more people working at better salaries and wages do not cause inflation. What causes inflation? Excess money, which will be revealed in the foreign exchange and commodity markets and bond markets. That’s the model they should use.” On that score, he may be right.

The Federal Open Market Committee minutes reflect a simple steady-as-she-goes approach, which surely means the edge to flattening remains very much intact. There was some discussion as to whether the yield curve has lost some of its predictive capabilities, but I’d dismiss that as more curiosity than policy. They also wrung hands over trade, whose impact is yet to be seen. That Fed Funds didn’t move tells you most of the story—the market didn’t see anything to get excited about.

There was talk about removing the term “remain accommodative,” and that bears watching. In my view, keeping it in goes with a hike every quarter. Taking it out would give them some flexibility to pause as policy would, presumably, be at neutral at that point. Again, the general theme remains intact—hiking once a quarter, and I think the yield curve discussion said that won’t be an inhibition to further hikes.

Speaking of which, NFP just came out and the Fed will like these. The gains were a bit above expectations, some upward revisions, but then there were tame average hourly earnings, and the rise in the unemployment rate was a function of an encouraging gain to labor force participation. It’s sort of the best of all worlds and would encourage the flattening bias, given the modest wage increases and overall improvement in hiring that will keep the Fed poised to err on the side of more hikes. The market’s reaction? Yawn.

While short-term momentum measures are rather deep on the rich side, the descending triangle suggests a break which would target 2.71 percent - 2.75 percent 10-yr yields with support at the June 27 high of 2.88 percent, confirmed by the 21-day MA at 2.89 percent. 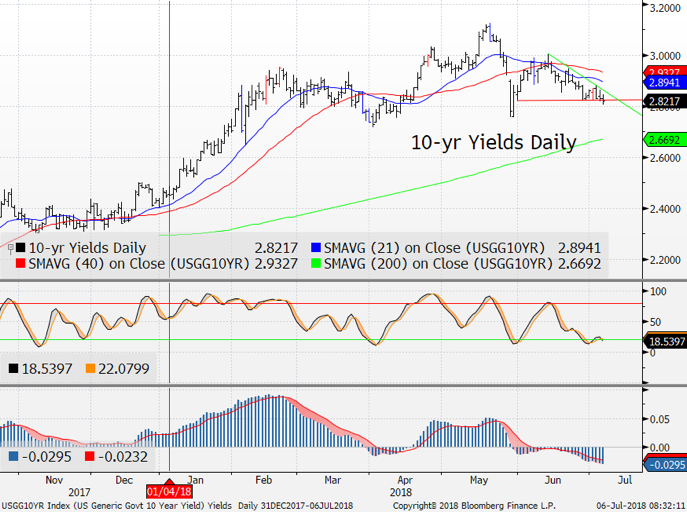