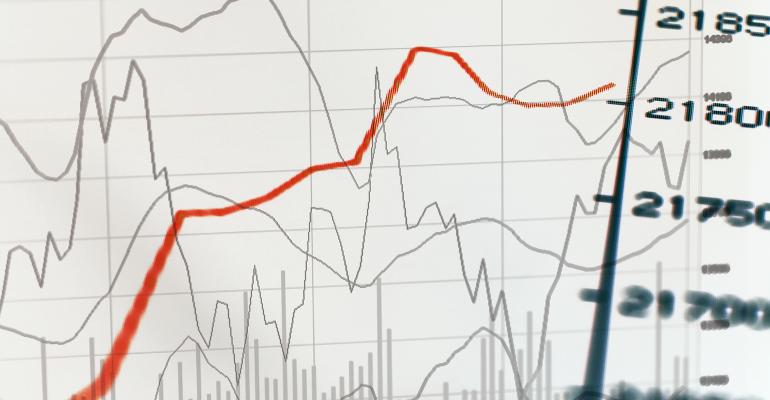 I would say the market from 7 Year Treasurys on out has done painfully little for the last two weeks, and that the big range day of June 26 (weak durable goods) seems to be the defining moment; yields out of the curve have largely stayed within that range.

Take a look at the histogram of 10-year yields below; it shows you how much volume is building in that narrow range. I don’t think it’s really about durable goods but simply a somewhat frozen longer end in a confused sense, i.e., the market doesn’t know what to do with trade and political rhetoric and firmer CPI on one hand and flat real wage gains on the other, while clinging to the common thread of Fed policy. Meanwhile at 25.5 basis points, the 2/10s curve continues to grind flatter.

I’m not adding much to tell you 7s/10s is at 3 bps and 10s/30s inside of 10 bps. Even if I were to allow that central bank policies overseas are the anomaly in this cycle contributing to that flattening and so challenge whether an inversion is meaningful. Even adding 15 to 25 bps to those spreads on that basis, with the Fed on a path for four more hikes by next summer, the curve flattening still warrants notice. As it stands, I think we’re well on the path to an inversion somewhere from 7s to 30s, perhaps as soon as the next hike. I’ll give 2s/10s until year-end to invert.

I don’t want to get too negative, but I’m a bit more inclined for a shallow retreat. Technically, momentum measures are overbought and turning up, while Daily Sentiment Indexes for the U.S. at 71.8 percent are decidedly into rich territory. Bearing in mind that overbought technicals can work themselves out through more sideways action, my call is for 30s to test a top of a channel and the 21-day moving average at 3 percent with a chance, not high, to test the high of that June 26 event at 3.03 percent. From a fundamental perspective I don’t see what really threatens the longer end; we’re in such a state where strong data will edge up odds for Fed hikes, which has been a positive for longer yields and a flatter curve. I don’t think that’s about to change.

I’m trying to nuance the curve and devise some butterfly trades, but I don’t see anything compelling. Something like 90 percent of the move has been about 2s underperforming versus the middle of butterflies outperforming, if that makes any sense. I can see some profit taking on trades that might goose 2s a bit, but it’s not thematic—maybe they have a 3 to 4 bp potential (the 21-day MA is 2.548 percent) performance coming off oversold technicals. That limited correction seems an excuse to take off trades rather than put them on.

I see some risk of a correction to the bullish flattening, but only a modest one; I’m inclined to take trades off versus putting them on. The market’s sideways action for the last couple of weeks is rather non-inspirational other than the curve’s flattening persistence.