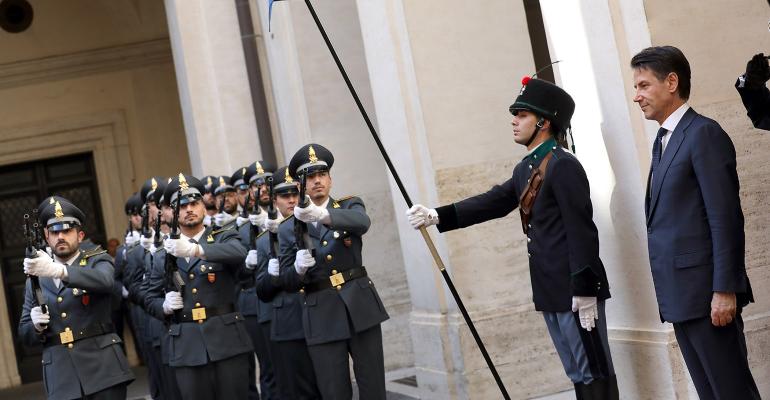 A lot of the what accelerated with the Italy story and to a lesser degree the China tariff angle was underway beforehand.

Simply, the market was poised for a correction, perhaps exaggerated into the long weekend which contained the Italy political mess and renewed threats of tariffs. You see this in the dollar and EM’s FX behavior.

It’s there in corporate spreads,

It’s there in positions and sentiment,

And the data was offering caution,

Plus we had technical divergences, I am inclined to see all that as a short-term set of influences to be unwound and restore the bond market, at least, to a less bullish footing. That said, between from 2.62+ to 2.75 percent to 3.12+ to 3.25 percent I think we settle into a summer range. A subtlety to that call is that now, having once tried and held 3.12+ percent, that level represents an important benchmark, and I don’t see the sort of geo-political events that have generated this current rally going away to the point that we’re back in full bear mode. We also have those pesky seasonals and the uncertainty of the November election to consider.

I’ll admit I’m confused by the curve. Even with a supposedly more dovish set of Fed Minutes last week and the fall in expectations for hikes, the curve couldn’t steepen. That failure is revealing. Part of that has to be the dollar’s behavior and the depth the short base so well evidenced above. Also, there’s the approach of month-end index extensions “crowded” into a holiday-shortened week, arguably illiquid, amidst the short squeeze just mentioned to say nothing of asset shifts from other markets to the safer haven of the US.

Another oddity to me is stocks. Volatile behavior, yes, but pretty much in the middle of the year’s range around the 21- and 40-day MAs. The balance might be between buybacks on the one hand and the geo-political stuff on the other. My bias is that stocks are vulnerable, which tends to make me favor both bonds, on a backup, and a flatter curve. I’d just prefer to establish my long with 10s behind 3 percent and, going back to the FOMC Minutes, feel that if the Fed will tolerate inflation over 2 percent for a while than longer end buyers can be less tolerant.

I take some solace from the May Non-Farm Payroll report, which with its firmer tone on most fronts (including a small increase in the labor force) has restored at least some of the odds towards three more hikes this year. This is to say, I think the bullish action into/out of Memorial Day exhausted the ‘need’ for a rally and the market now finds itself back in more of the range concept I’ve discussed above. It may be a choppy June, what with the front end ‘anchored’ to a fully-expected Fed hike, which makes it vulnerable to the day to day, or tweet to tweet, headlines that may have very little to do with high-frequency economy data and more to do with the ebb and flow of geo-politics and whimsical Presidential thinking. But then, that’s rather what we’ve been doing anyway.

I remain, strategically, in favor of flattening and reiterate my caution vis-a-vis risk assets, which only occasionally has been satisfying so far.