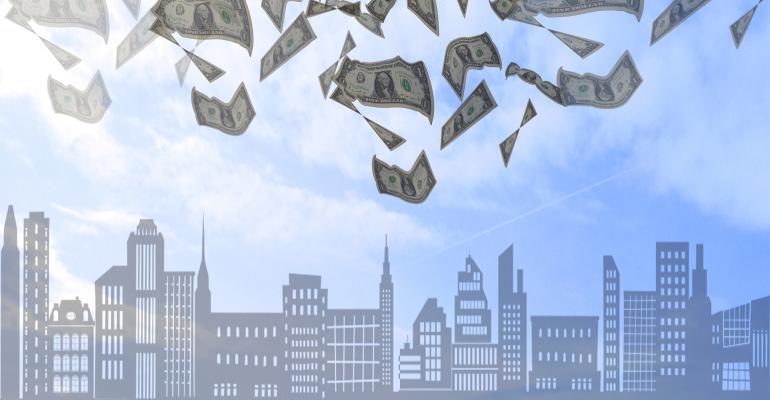 On the heels of yet another Fed rate hike, the commercial real estate industry is feeling the painful effects of both higher capital costs and lower loan amounts.

Borrowing costs have doubled in the past six months. And rising rates and growing certainty that Fed policy will push the country into a recession is creating dislocation in capital markets. Large banks in particular have largely moved to the sidelines on commercial real estate lending, and first mortgage lenders across the board—including Fannie Mae and Freddie Mac—are dropping loan amounts based on higher costs of debt service coverage.

“Not that higher interest rates weren’t warranted, but the speed at which the Fed is pushing rates has shocked the market,” says Richard Ortiz, co-managing partner at Hudson Realty Capital. Some borrowers are effectively frozen, uncertain of how to respond and how to recapitalize, while lenders also are uncertain of how to lend in a market where there is so much turbulence and uncertainty, he adds.

Although there’s not much lenders can do to lower their rates, they are searching for solutions to keep capital flowing. “We have really pivoted our focus over the last nine months to try to be reflective of the new reality we’re dealing with,” says Scott Larson, managing principal at Pangea Mortgage Capital (PMC). The middle market balance sheet lender is stepping into areas of the market where capital has disappeared.

PMC recently introduced a short-term multifamily lending product to help sponsors weather the turbulence in the CLO market. Historically, PMC has focused on providing bridge loans with two- or three-year terms. It’s now offering a shorter term multifamily bridge loan at 12 to 18 months to help borrowers realize business plans. The short-term bridge loan is coming into play both on acquisitions and construction projects that need more capital due to project delays or cost overruns. “We’re just really trying to provide a temporary solution for sponsors until things stabilize,” says Larson.

Short-term solutions are a common theme. For borrowers that are coming off a bridge loan or construction loan, oftentimes they are opting to extend if they have extension options. “We’re seeing a lot of our borrowers just extend out their existing debt and hoping that there will be cheaper options available in the future,” says Shlomi Ronen, founder and managing principal of Dekel Capital, a Los Angeles-based real estate merchant bank.

Red Oak Capital Holdings is an existing bridge lender that is expanding its offering of fixed-rate bridge loans to include three new products—a core, core-plus and participating bridge loan program, as well as a renamed opportunistic bridge loan program. “Floating rate transactions aren’t nearly as viable or as efficient as they were six to eight months ago. So, a lot of borrowers are transitioning to fixed-rate lenders, especially unlevered fixed-rate lenders such as ourselves,” says Gary Bechtel, CEO, of Red Oak Capital Holdings. “We’ve seen a huge demand for our loans, which is why we’ve expanded our loan program,” he adds.

Red Oak’s core and core-plus products are being funded from its Oak Institutional Credit Solutions debt fund, with strategies on the more conservative side of the bridge lending spectrum, notes Bechtel. The core loan program in particular provides a placeholder capital solution for borrowers, such as those waiting for the market to stabilize in order to sell an asset, he adds.

The opportunistic and participating bridge loan programs are funded from capital raised through broker-dealer and RIA channels and tend to be more aggressive in their structure, pricing and risk tolerance, adds Bechtel. For example, on its opportunistic bridge loans, Red Oak offers up to 75 percent loan-to-value (LTV) and up to 90 percent loan-to-cost (LTC), based on the stabilized value or transaction underwriting.

Its participating bridge loan program also includes an equity component from Red Oak in exchange for a percentage of the value creation realized in the project at sale or refinance. The product offers up to 75 percent loan-to-value (LTV) and 100 percent loan-to-cost, depending on transaction underwriting. “That program is for projects that have a very heavy lift component where you are acquiring an asset that is going to be repositioned, such as renovated and re-tenanted or converted to some other use,” says Bechtel.

Recent volatility in the new issuance CRE CLO market has caused some issuers to need to get creative to price deals. One avenue they have gone down is issuing via the Freddie Q program, which provides, for a fee, a guarantee to the senior portion of the capital structure of loans of similar characteristics to those that have traditionally backed CRE CLOs. “This guarantee helps provide an overall lower cost of capital for the issuer than they could currently otherwise find in the traditional CRE CLO market. This has proven to be a popular move and the pipeline for Q issuance, is filling up quickly,” says Rob Jordan, head of CMBS Product at Trepp.

Broadly, the GSEs also continue to be a good source of capital for multifamily borrowers. For example, Hudson Realty Capital is working on a $30 million construction loan for a ground-up multifamily construction project in Salt Lake City that is being financed through the HUD (d)(4) program. “The borrowers were unable to get their banks to commit, not so much on the pricing of the loan, but on the proceeds,” says Ortiz.

As they were going through the process, the banks kept reducing the amount they were willing to lend. At the end of the day, there wasn’t certainty that the banks were going to close on the loan. The developer submitted the (d)(4) loan app and received HUD approval very quickly. Once the deal was approved, the borrower also knew there wouldn’t be any deviation based on a credit committee decision, notes Ortiz. “Getting loans through HUD on a more expedited basis these days is really helping that product along,” he adds.

Capital also is lining up to fill the growing gap between the senior loan and equity piece in a sponsor’s capital stack. In some cases, LTVs have dropped from 65 percent to 45-50 percent.  Lenders such as Hudson Realty Capital, PMC and others are lining up to provide mezzanine financing or preferred equity. Although the gap capital space is becoming increasingly crowded, capital providers also are selective in the types of deals they are willing to do. “Also, the ability to come in and structure that gap capital in concert with the first mortgage lender is where certain firms can distinguish themselves,” notes Ortiz.

Gap financing is in demand across a variety of scenarios. For example, some buyers are looking to purchase properties with assumable debt at a lower rate. Finding an existing interest rate that might be at 3.25 percent is a lot more enticing than if they were to originate a new loan and have to take on a 6 percent rate, notes A. Yoni Miller, co-founder at QuickLiquidity. “The problem is, most of these assumable loans are at a low leverage point,” he says. For example, a property that is being sold for $10 million may only have assumable debt of $5 million. Many buyers are coming in with a 25 percent down payment. “So they are turning to us for mezzanine financing to help them bridge the gap,” he adds.

The cost of that capital isn’t cheap, with financing rates typically in the low- to mid-teens and duration of three to four years. Mezzanine loans and preferred equity is often priced in the low to mid teens. “Transaction volume hasn’t been tremendously high. So, there are probably more groups offering that type of capital than there are those seeking it at this point, but that will eventually change as more borrowers are forced to make decisions on their properties,” adds Ronen.