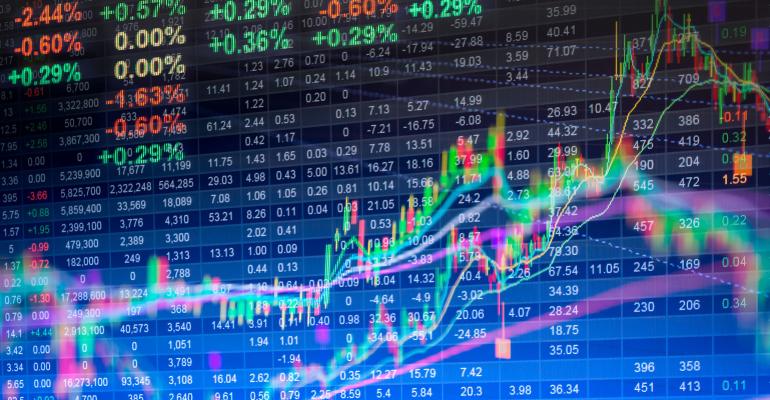 Zombie ETFs No Problem for Exchanges Dying to Dominate Listings

Launched on May 10 as a play on “healthy alternatives,” the fund has seen an average of 259 shares change hands per day. On half of those, no shares sold at all. While that’s thin volume, it would be the envy of iShares’ MSCI International Developed Size Factor ETF, which in 14 months has had 2,725 shares trade. Total.

Around U.S. markets, uptake for new ETFs is slowing down. Securities launched in the last year have had a tougher time finding a fan base, posting around 3,300 shares of average daily volume after three months, less than half the level of two years ago. The median fund has a market value of $5.1 million 90 days after its debut, compared with $10.1 million in 2014.

Could there be a limit on how many ETFs the world needs? It’s an impolite question in money management circles, where assets in the industry have swollen 10-fold in a decade and somebody comes up with a new one to lure investor cash literally every day. At the same time, it isn’t an outlandish concern in a market stuffed with 16 securities tracking consumer staple makers and 37 tied to banks, most of which trade very little.

“The ETF industry has a relatively low barrier to entry, but a very high barrier to success,” said Dan Draper, head of Invesco PowerShares. “It’s becoming increasingly difficult for new companies’ products to get liquidity and distribution, and also gain the confidence of investors. You have a lot of new issuers and offerings, but that ironically makes it more difficult for new entrants to gain traction.”

Whether we will one day reach peak ETF is of particular interest to American exchanges, which make money from frenetic trading in the stock-like products. While there’s no sign issuers are slowing down or investor ardor for the concept is weakening, equity markets lately have found themselves fighting to list funds that are almost as likely to lumber into dormancy as catch on.

Consider regional banks, where the two largest ETFs are also the oldest: the $1.7 billion SPDR S&P Regional Banking ETF and the $285 million iShares U.S. Regional Banks ETF. Since they were launched in mid-2006, five additional regional banking funds have been started, none of which comes close to their predecessors in market capitalization or trading volume. Four funds started between 2010 and 2015 never exceeded $41 million in assets.

Lengthening odds of success have done nothing to discourage sponsors from launching new ones. Nor has it kept exchanges from fighting for listings, mainly because ETFs, the retail stock market’s most successful innovation in a decade, account for 30 percent of trading on American exchanges. About half of ETFs are profitable, according to Bloomberg Intelligence analyst Eric Balchunas.

Bats Global Markets Inc. expects ETF assets under management to reach more than $15 trillion in 10 years and is staking its future partly on an ability to grow with the industry. More than 270 U.S.-listed ETFs were launched in 2015, almost double the number started just two years prior. This year, 141 new funds have already been originated.

“Competing for new exchange-traded listings is the only show in town these days,” Ben Johnson, director of global ETF research at Morningstar Inc., said by phone. “There are certainly far fewer options than there were a few years back, so it’s getting heated.”

The competition is all the more intense because it pits two companies, Bats and Nasdaq Inc., against one another. They’re trying to break the near-monopoly of a third, Intercontinental Exchange Inc.’s NYSE Arca platform, which lists funds that account for 90 percent of the total market value of ETFs in the U.S. Winning listings is a route to enhanced trading revenue and a host of ancillary advantages, such as building clout with deep-pocketed issuing companies.

“It’s a little bit the fear of missing out,” Balchunas said, “and the optimism of the business potential.”

Few are more optimistic than Chris Concannon, the chief executive officer of Bats, who predicts ETF assets will growth fivefold by 2026 from about $2.7 trillion today. The decade-old exchange operator has made it a priority to lure the funds -- either from underwriters or competitors. Bats, which went public in April, charges nothing to list a fund, and even offers to pay issuers based on volume.

“Just because their product doesn’t trade that much now, doesn’t mean it’s not a fruitful and profitable relationship,” said Bryan Harkins, head of U.S. markets at Bats. Even when a new product is thinly traded, he added, “our natural aspiration will be for those issuers to transfer some of their more liquid products to Bats.”

Other exchanges have tested incentives to promote trading. In 2013, Nasdaq and NYSE Arca both ran pilot programs that allow ETF sponsors to offer payments to market makers, a perk born of concern that lightly traded stocks are less attractive to automated traders. Some long-time critics of market structure say these plans help prop up zombie ETFs.

“Exchanges are the culprits,” said Joe Saluzzi, partner and co-head of equity trading at Themis Trading. “Their model is based on speed and selling data, and the more they can put into their exchange and their data feed, the more valuable it is. It always comes down to that.”

To be sure, because of their expanding assets, ETF would represent a major growth opportunity for exchanges regardless of whether any new ones were launched. Trading in the fragmented U.S. equity market isn’t tethered to one place, and just by being part of the network, exchanges make money when ETF orders are routed their way.

Still, exchanges do benefit from listing ETFs. Though the securities can trade virtually anywhere, volume returns home at the beginning and end of the day -- bringing in revenue for the listing exchange. Take the SPDR S&P 500 ETF Trust, the most-traded U.S. fund. On Aug. 11, the biggest transactions by far were the opening and closing trades on NYSE Arca, its listing market: 106,258 and 4.3 million shares, respectively. Together, those two accounted for 6.1 percent of total volume for the day.

Moreover, the history of ETFs has been such that as one strain of innovation cools, others heat up. Even if passive industry and asset class funds are finding fewer buyers, securities based on new ideas -- smart beta, multifactor and even actively managed ETFs, which Bats has championed -- have usually arrived to pick up the slack.

The U.S. Securities and Exchange Commission last month approved a rule filing that will speed the listing process for actively managed funds, a victory for the exchanges, which had asked for a streamlined application process last year. In a filing on Thursday, Fidelity Investments said it’s seeking to retrofit closed-end funds -- which issue shares that trade on an exchange but aren’t required to disclose holdings daily -- as ETFs.

To exchange leaders like Nasdaq’s Jeff McCarthy, volume is just one piece of a bigger equation in determining which funds to list or pursue for a listing. Maintaining close contacts with issuers is important, which sometimes means putting up with weak trading in certain funds.

In this way, exchanges are playing a long game. History has shown that a slow start isn’t necessarily death for ETFs. The First Trust Enhanced Short Maturity Fund, which invests in short-duration investment-grade securities, traded just 30,000 shares in its first two months after launching in August 2014. In the 22 months since, it has seen more than 175 million units change hands.

“Issuers invest a lot of time, energy and cost into the development and launch of an investment product, but unfortunately there is no magic formula for building one that is highly successful from inception,” said Doug Yones, head of exchange-traded products at NYSE Euronext. “Our role as an exchange is to offer the greatest possible liquidity and tightest spreads, and to give investors the broadest range of products to reflect their investment beliefs.”