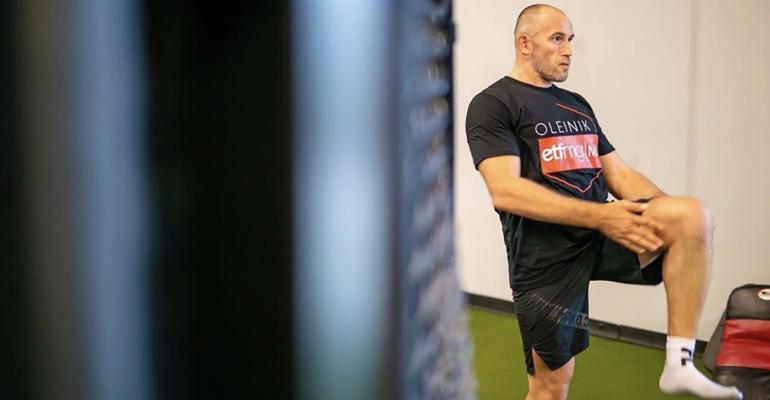 In Zero-Fee Era, Wrestlers and Astronauts Help Funds Fight Back

In order to stand out, smaller ETF issuers are using advertising gimmicks, taking to Twitter.

(Bloomberg) -- Smaller asset managers are getting creative as they look to take the fight to the likes of BlackRock. Meet the Boa Constrictor.

The UFC heavyweight best known for winning bouts with a rare judo chokehold burst onto the exchange-traded-fund scene earlier this year as an unlikely advocate for a cannabis fund run by ETF Managers Group. At a dinner arranged by the issuer in midtown Manhattan last month, Boa -- real name Alexey Oleynik -- taught impromptu lessons on how to throw a punch, and flexed for tough-guy photos in a shirt branded with the company’s logo.

It may seem like a gimmick, but the intent is serious: Oleynik is bringing ETFMG to the masses, bearing the firm’s name during fights and spreading its brand on social media. Conventional campaigns that tout low costs or smart strategies won’t cut it for smaller issuers in the $4 trillion industry dominated by BlackRock Inc., Vanguard Group and State Street Corp. So investors get oddball celebrities, charity giveaways and even astronaut costumes. The battle for survival is so daunting that regulators are taking a look.

“What we’re seeing now is a monopolization of assets,” said Phil Bak, founder and chief executive officer of Exponential ETFs, which has $413 million in assets under management. “You could say, ‘wow are the bigger issuers’ salespeople so wonderful that no one wants to work with anyone else?’ Or you could ask what is it in the ecosystem that is driving all of that?”

It’s certainly a tough landscape: The Big Three account for about 82% of assets in U.S. ETFs. So, to stand out from the crowd, many smaller issuers have embraced thematic strategies focused on niche investments such as cannabis, social media, video games or robotics that could become the next boom industry. But with assets in these funds stalling under $50 billion, some are concluding that firms need to get a bit wacky to make a splash.

For example, when ProcureAM listed its first fund -- the Procure Space ETF -- in April, the firm dispatched a NASA wannabe in an astronaut costume to appear at locations around New York to promote the fund’s exposure to the nascent space industry.

“I’d seen numerous times at corporate bell ringings mascots of that company going around the floor of the exchange,” Procure CEO Andrew Chanin said. “It makes it more memorable.” So too does the fund’s ticker -- UFO -- which was also chosen to “stick in people’s minds,” he said.

Meanwhile OppenheimerFunds Inc., which was bought by Invesco in May, last year hosted a “factor derby” to draw attention to its smart-beta funds. Designed to coincide with the Kentucky Derby, anyone from moms and pops to professional advisers were encouraged to build and race their own “thoroughbred portfolios.” The winner could donate $25,000 to the charity of his or her choice.

It’s not just about games and dress-up. In a throwback to the days when successful hedge-fund managers were known far beyond Wall Street, other smaller issuers are leveraging the personalities and knowledge of internal experts to promote their funds.

One prominent figure is Cathie Wood, the chief executive of ARK Investment Management, who’s made a name for herself buying Bitcoin and making bold calls on tech companies like Tesla Inc. Wood currently has 32,000 Twitter followers, and the firm uses a combination of tweets, blog posts and podcasts to promote its work.

So does $11 billion Global X Management Co., which has trademarked the term “conversational alpha” to describe how thematic funds can boost an investor’s experience. And Alpha Architect, which manages about $420 million from the suburbs of Philadelphia.

“When we write a post, that’s really the lifeblood of what we do,” said Wes Gray, the Pennsylvanian firm’s founder. “We use Twitter as a way to interact with people.” Gray has more than 30,000 followers on Twitter.

That said, there’s still some room for smaller asset managers to differentiate themselves using more traditional methods -- if they can stomach it. Social Finance Inc. made a splash with plans for the first ETFs that cost nothing in February, while Salt Financial offered to pay investors to buy its fund.

But the challenges faced by these issuers has piqued regulatory interest. The Securities and Exchange Commission wants small and mid-sized firms to weigh in on whether the cost and burden of regulatory compliance is creating barriers to competition, and Dalia Blass, director of the SEC’s division of investment management, has expressed concern that the variety of funds offered by smaller issuers could be “lost in a wave of consolidation and fee compression.”

For Salt co-founder Alfred Eskandar, whose firm complained of anti-competitive practices that favor larger issuers in a letter to the Federal Trade Commission in January, the SEC’s probe is a step in the right direction.

“The SEC has a lot on its plate, and it will move at SEC pace,” he said. “I’m not sure when will see something material there, I’m just happy they have put it on the calendar.”