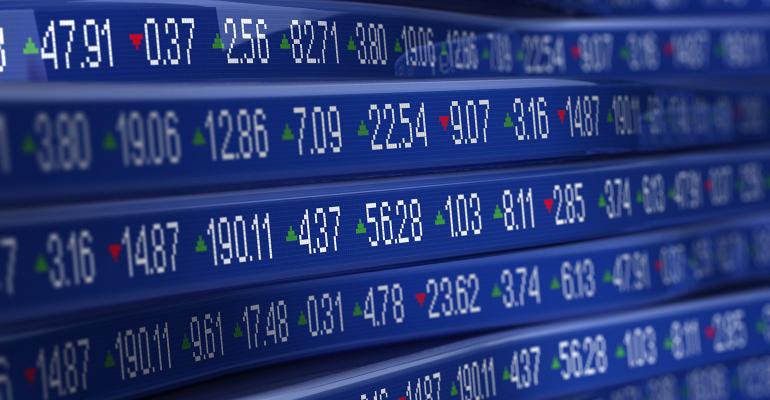 Your Friendly Junk-Bond ETF Trader Is a Pension Fund

(Bloomberg Gadfly) -- It's no secret that exchange-traded funds are popular among institutional traders.

But ETFs are increasingly becoming the market when it comes to $1.4 trillion of U.S. high-yield bonds.

Consider this: Kevin McGrath, who manages money for the New Jersey Division of Investment, said that ETFs can account for up to 30 percent of the pension's internal high-yield debt exposure. Right now, the fund's junk ETF holding is smaller than that, he said.

"We think of it as a liquidity sleeve alongside our cash bonds," said McGrath in a Bloomberg Television interview with Erik Schatzker Thursday. "You can add positions quickly, diversify positions."

McGrath doesn't work at an asset manager that aims to profit from higher-frequency trading tactics. He helps manage money for seven pension funds, which had about $79 billion under management as of the end of last year. That makes his statements fascinating from a couple of perspectives.

First, they highlight just how difficult times are for pensions, which are generally expecting unrealistically big returns at a time of ultra-low yields. It's hard to see where those gains are going to come from without taking some risks and even trying some unconventional strategies, which could easily backfire.

And second, his comments show just how important ETFs have become for the U.S. junk-bond market. These funds look a lot like bonds -- after all, they own a basket of them -- except they trade like stocks, which is precisely why they're so appealing.

Junk bonds are still often traded on the phone, away from exchanges, without a lot of disclosure about pricing before or immediately after a trade. Stocks, in contrast, trade quickly on exchanges, with much more pricing transparency. They're much easier to work with.

These debt ETFs have grown a ton but they aren't that big, relatively speaking. The two biggest junk-bond ETFs have about $27.1 billion of assets under management, or less than 2 percent of the U.S. junk-bond market.

Despite their relatively small size, they have become a node of activity in a market that's still struggling with an outdated infrastructure. And that means they can set prices for the rest of the market, which is an amazing amount of power -- especially considering the pool of high-yield debt has never been bigger.

The growing focus on these funds is concerning to some. They argue that it's generally harmful to package illiquid assets into a wrapper that investors can trade easily. What happens if investors all decide to withdraw at once, potentially forcing a liquidation of the underlying assets? Since high-yield bonds still don't trade all that much, it could cause the market to seize up.

This worst-case scenario has been heavily debated and studied by academics, without really solving the main question of whether this is likely to happen, even in a severely adverse scenario. (ETF proponents would argue that they could always just deliver bonds in kind to investors rather than choosing to liquidate, avoiding a fire sale.)

Another big issue is that credit ETFs are growing up at a time when many investors want to bet on riskier debt without owning it. They want to dabble in junk bonds without having to commit or analyze the specific, underlying companies. And at a time of middling economic growth and a waning effect from central-bank stimulus, folks want to ensure they have a quick exit strategy.But if the tide turns and this market crashes, credit ETFs won't save investors from big losses.