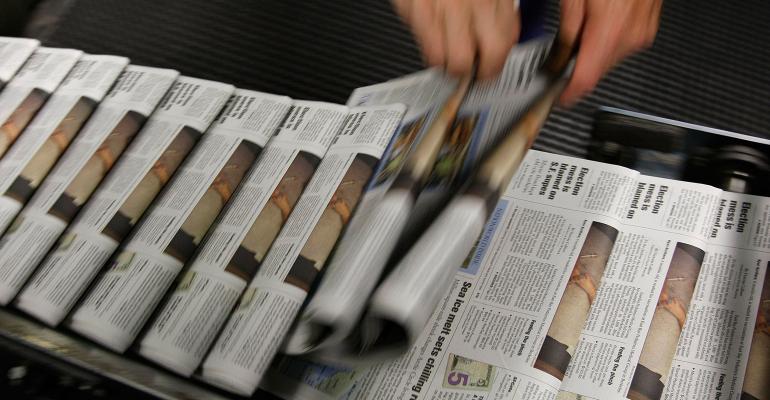 You Can't Fake This: Media Stocks Are Headline News Under Trump

Owners of newspapers, cable television and websites are some of the best performers in the broad stock-market rally.

By Joseph Ciolli and Stephen Sweeney

(Bloomberg) --The media under Donald Trump: fake, dishonest -- and on fire.

At least in the stock market, where purveyors of newspapers, cable television and websites are some of the best performers in a broad market rally that itself is already front-page news. Deal making and speculation that the new president will dismantle regulation is blotting out the group’s bad press -- among investors, anyway. Even short sellers are evacuating.

The S&P 500 Media Index has surged 17 percent since Nov. 8, the fourth-best return out of 24 industries, while short interest on an exchange-traded fund tracking the stocks sits at the lowest since September 2015, IHS Markit Ltd. data show. Many of the best-performing individual stocks, such as Tegna Inc. and Scripps Networks Interactive Inc. -- both up more than 20 percent -- have seen bears retreat.

“The biggest driver in the media rally since the election has been greater regulatory openness to value creation though potential M&A,” Paul Gallant, a Washington-based analyst at Cowen & Co., said in a phone interview.

Pai, who has been on the commission since 2012 and the agency’s chairman since being designated by Trump in January, has also spoken out against TV station ownership restrictions and privacy requirements for broadband providers. He’s criticized the net-neutrality rules adopted by Democrats in 2015, already suspending a requirement that internet service providers safeguard customers’ data.

While a primary driver of the post-election rally has been optimism that the FCC may ease rules, Wells Fargo analyst Marci Ryvicker has also previously cited the potential for higher advertising spending amid expectations of lower taxes and health-care costs under Trump.

Further, some stocks in the media index are rallying off recent weakness. Walt Disney Co. was at an eight-month low in the weeks before the election, while 21st Century Fox Inc. sat at a more than 3 1/2-year low two months ahead of Nov. 8. Both companies have rebounded at least 10 percent since the vote.

Here’s a summary of the lack of short interest in media shares:

SI on Scripps Networks decreased to 5.93% of shares outstanding on March 3, the lowest since Nov. 20, 2014; stock has climbed 21% since the election