Yield Curve: Are We OK Now?

Wow! What a week it was. Last week, I mean. Interest rates on the long end of the yield curve got yanked up so much the banking system ended up with a wedgie. The yield on the 30-year T-bond soared 35 basis points, the biggest five-day spike since, well, since a long time ago.

The shift in long-term rates is just part of the story, though. The very shape of the yield curve has changed dramatically since the summer of 2018. The question now is whether that change is being reversed.

Notice the red dotted line in the chart below? That describes the Treasury market just ahead of Independence Day 2018. It’s a normal, upward sloping curve where long rates were higher than shorter-term yields. A year later (depicted by the blue line), a sag developed in the middle reaches of the curve as recession fears took hold.

The worst days for the curve were yet to come, though. By the first week in September, the trough had deepened (see the green line) even more. To boot, the long bond’s yield sank 8 bps below that of the one-month bill. Things were looking pretty bleak, at least according to bond buyers. 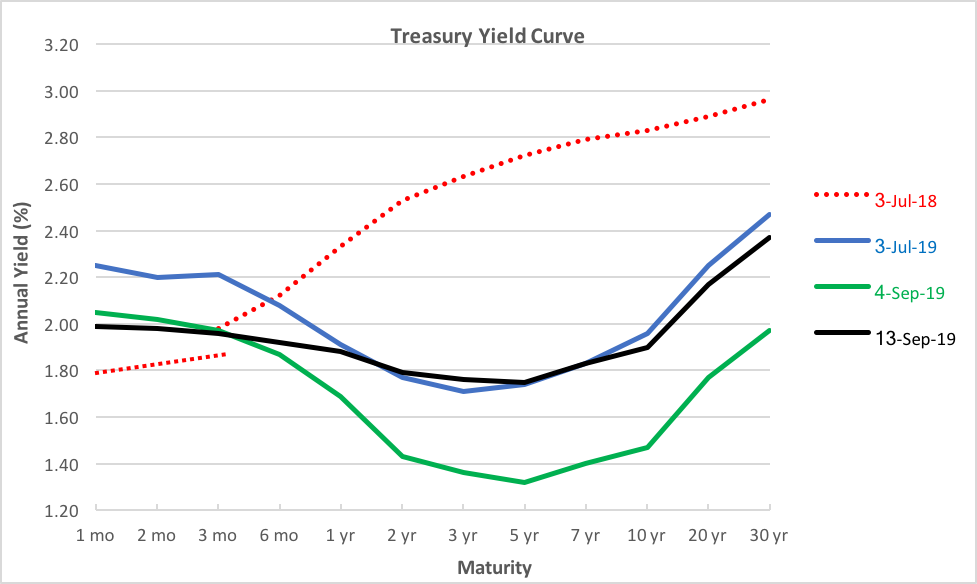 But cheer seemed to return last week. Oh, we’re not back to full-blown normalcy yet, but the curve’s beer belly has tightened (regard the black line), and long bond yields are once again richer than short rates.

So, is the scare over? Are sunny days ahead? Well, like any weather report, the prospect of unclouded skies isn’t permanent. It will be sunny until it isn’t. For now, though, there’s real chance of higher market yields. That means lower bond prices.

How low? Well, using the iShares 20+ Year Treasury Bond ETF (Nasdaq: TLT) as a proxy for the long end of the curve, it looks like last week’s breakdown set the stage for a further 9% price dip from Friday’s close. TLT ended the week at $136.54, after a six percentage point loss. We’re now looking at a tentative objective at the $125 level for TLT. Technically, that is, barring any surprise announcements from the White House or the Fed.

Investors may want to watch the support in TLT’s price just under $125 as a buy signal. If there’s a bounce, yields may yet find lower ground. If not, well, we’ll deal with that then.

More aggressive investors or hedgers might want to exploit near-term bond weakness by tapping the ProShares UltraShort 20+Year Treasury (NYSE Arca: TBT), a 2x-leveraged inverse take on the right side of the curve. You might think that the fund’s double inverse leverage would give you a shot at an 18% gain given the technical picture for the Treasury curve. And you’d be right, but that payback might just be a minimum. Compounding could produce gains up to 25%. Just keep the $125 target for TLT in mind as a potential bailout signal.

We may not be back to normal yet, but at least there’s a two-way trade in bonds again.