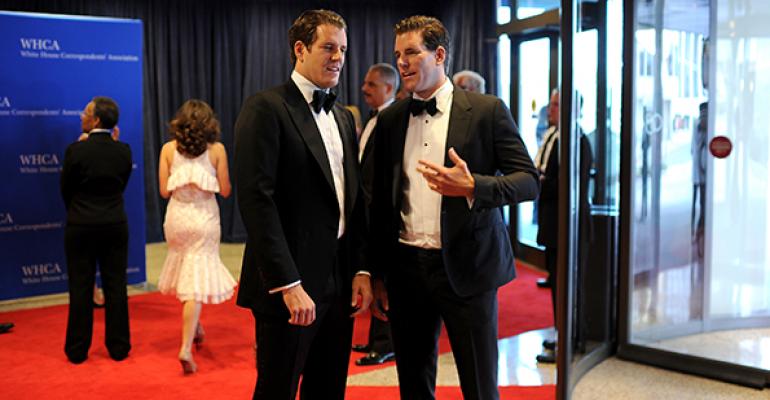 Winklevoss Bitcoin Bet Is a Countdown to Zero -- or Less

On March 11, the twins are expected to receive a final decision from the U.S. Securities and Exchange Commission on whether they can list their ETF.

(Bloomberg Gadfly) --Bits, the units of information that underlie any digital currency, have only two values: zero or one. Perhaps it's time investors were reminded that buying bitcoin is a similarly binary wager.

The virtual asset is trading at a record, shrugging off a campaign by the People's Bank of China to control trading. Underpinning its rise is the hope that American entrepreneurs Cameron and Tyler Winklevoss will succeed in their attempt to create the first bitcoin exchange-traded fund.

On March 11, the twins are expected to receive a final decision from the U.S. Securities and Exchange Commission on whether they can list their ETF. A favorable outcome would create a precedent and pave the way for other providers. There are two more funds seeking a review from the regulator -- one of which already trades over the counter -- and talk abounds of many more.

Investors who have driven bitcoin's price above its November 2013 high of $1,137 are betting that the advent of bitcoin ETFs will spur demand for an asset class with limited supply and cause prices to extend their climb.

In spite of employing lawyer Kathleen Moriarty, a legend in the ETF world, the Winklevosses have been forced to wait since July 2013 as the regulator takes its time to determine whether the digital currency can be considered an asset class. Even the lawyers working for the twins initially didn't want to take the case because they thought bitcoin might be a Ponzi scheme.

All the while, the twins have been amending their filing in an attempt to convince the SEC. The latest bull run started shortly after their most recent addendum, registered on Jan. 20, which among other things requested a larger initial issue size for the fund.

Along the way, they've added settlement systems in order to establish the bitcoin price and determine the net asset value of the ETF at the end of every day. (Conveniently, that process will happen on the Gemini exchange, owned by the Winklevosses.) They've also added insurance, so potential hacks shouldn't be an issue.

Yet for all their bending over backward, they have yet to win an endorsement from the regulator, which still operates mostly on legislation enacted in 1933. The U.S. government simply may not be ready to give the stamp of approval to bitcoin that allowing an ETF would imply.

In the more likely outcome of an SEC rejection, bitcoin could quickly drop back to the sub-$800 levels tested after China's latest crackdown was unveiled in January. That would be a drop of about a third from the current price. Meanwhile, the upside in the event of approval is unclear.

The launch of the first Gold ETF was hardly bullish. For the first year of its existence, the metal's price actually dropped. Eventually, it took off, but more as a result of the turmoil unleashed by the global financial crisis than on its own merits.

Put simply, the downside for bitcoin is potentially much bigger than the upside -- at least in the short term. The digital currency's future has never been this binary. Unlike with programming code, though, one of the two alternatives isn't zero: It's a deeply negative number.

Christopher Langner is a markets columnist for Bloomberg Gadfly. He previously covered corporate finance for Bloomberg News, and has written for Reuters/IFR, Forbes, the Wall Street Journal and Mergermarket.
To contact the author of this story: Christopher Langner in Singapore at [email protected] To contact the editor responsible for this story: Matthew Brooker at [email protected]