The best phrase to describe last week’s oil market is “roller coaster.”  You wouldn’t think so if you just looked at the week’s ending numbers. Front-month light, sweet crude wrapped up Friday at $54.40 a barrel, just a 2% loss for the week. The ride to Friday’s close, though, was more than a little scary.

Prices plunged on Wednesday toward the $50 level, a price plateau not visited since the harum-scarum of the 2018 Tariff Tantrum. The cause of Wednesday’s nosedive? A lot of talking heads blamed the sudden devaluation of the Chinese yuan by the People’s Bank of China, but there was long-standing technical weakness as a predicate.

It’s not likely that this buoyancy signals a turnabout in oil’s fortunes, though. Why? Well, fears about further escalation of the U.S.-China trade war and concerns about slowing demand are now being priced more and more into traders’ expectations.

So where are oil prices headed?

Clues can be found in the CME crack spread. This rather gruesome-sounding value is actually the difference in the cost of crude oil and the combined prices of crude’s major byproducts, namely gasoline and fuel oil. The spread approximates the gross profit margin a refiner could earn by breaking crude oil into more useful—and salable—distillates.

Here’s the deal: In the past week, crack spreads started to shrink precipitously to levels not seen since the top of the year. That’s unusual. As the cost of input crude oil weakens, the crack spread ordinarily strengthens. But now, distillate prices have softened, cutting into refiners’ profits.

So, what’s all this got to do with the price of stocks? Just this: Crack spreads and the resultant gross refining margins (GRMs) are bellwethers of economic health and stability. A thriving economy is heralded when a refiner can buy crude cheaply and sell distillates at premium prices. An ample supply of oil inputs implies exploration, and production companies have found a favorable environment to crank out crude while firm prices for distillates imply strong consumer demand. 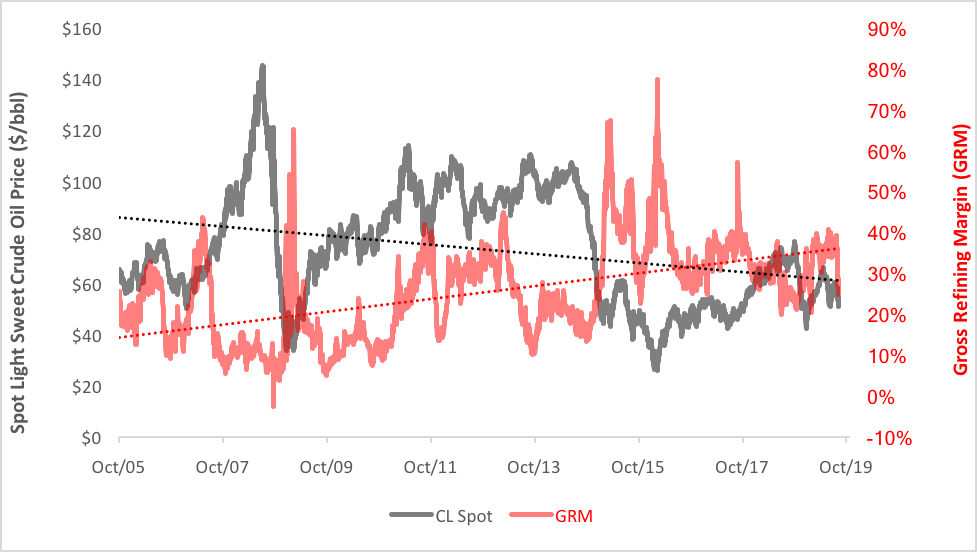 Refining margins also are telltales for the prospects of independent refiners such as Valero Energy Corp. An aptly tickered exchange traded fund, the VanEck Vectors Oil Refiners ETF (NYSE Arca: CRAK) devotes more than 7% of its portfolio space to VLO and is well-correlated (65%) to the refiner’s daily price movements.

In the end, domestic light crude oil (of which West Texas Intermediate is the best-known grade) seems likely to test the $50 level once more. The prospect of another rebound, though, will diminish apace with further signs of impending economic weakness.

Brad Zigler is Wealth Management's alternative investments editor. Previously, he was the head of marketing, research and education for the Pacific Exchange's (now NYSE Arca) option market and the iShares complex of exchange traded funds.