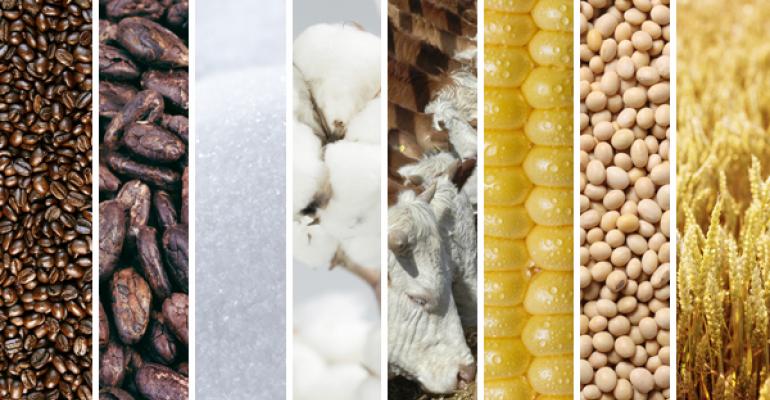 Which Commodity ETPs Should You Buy?

In the past year, some commodities have risen at warp speed while others have lagged. &nbsp; Food prices, as most investors know, are a significant contributor to inflation. &nbsp; While agricultural commodities have collectively outperformed U.S. stocks in early 2014, investors and traders will have to be more selective going forward.&nbsp;

You know, an 18 percent gain over 12 months isn’t a bad return. That’s how much the S&P 500 has appreciated since April 2013. But now the index is now stalled. In fact, since New Year’s Day, domestic equities have been ceding ground to commodities—a reversal of a two-year trend. 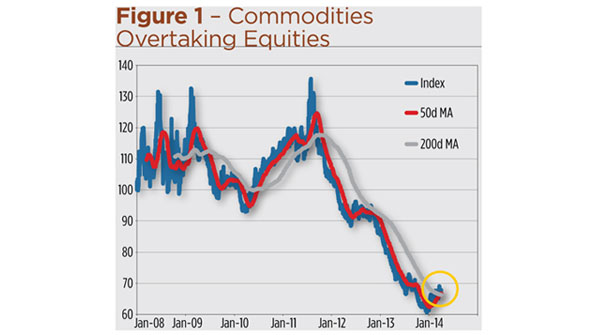 GCC’s weighting scheme, unlike that of other broad-based commodity funds, tends to play up agricultural commodities. And to good effect since ags have been on a recent tear. The agricultural complex isn’t a monolith, though. In the past year, some commodities have risen at warp speed while others have lagged.

Consider “soft” commodities such as coffee and cocoa. In the past year, “spot” (immediate delivery) prices for Arabica coffee have shot up 53 percent because of a crippling drought in Brazil, the world’s top producer. Supply deficits have similarly ratcheted cocoa prices up 25 percent over the last 12 months. Corn’s been a different story, though. Cash maize prices have slumped 17 percent amid rising inventories.

Food prices, as most investors know, are a significant contributor to inflation. Presently, food prices make up 14 percent of the Consumer Price Index (CPI), an even greater influence than energy costs. It’s no surprise, then, that ags have been favored as inflation proxies for years.

Nowadays there are plenty of vehicles for trading and investing collectively in ags, most notably the $1.6 billion PowerShares DB Agriculture Fund (NYSE Arca: DBA), which tracks an index of 10 livestock, softs and grain futures.

Alternatively, investors can fine tune their exposure through a number of single-commodity exchange-traded products (ETPs). Given the disparate outlook for commodities, that may, in fact, be the better tack for the upcoming year.

Coffee: The current year’s crop came in lower than expected and next year’s crop looks even worse as widespread drought has inhibited limb growth and budding. Some forecasters are now predicting a deficit in Brazilian stocks as large as 10 million bags (1.3 billion pounds) in 2015-2016, setting up a run to all-time highs  —  north of $3.40 a pound  —  in the coming months. That could mean a further 60 percent hike in green coffee prices.

Securities investors can get a jolt of java through the iPath Dow Jones-UBS Coffee Subindex Total Return ETN (NYSE Arca: JO) which tracks the front-month futures contract.  Because of a steep contango, however, note investors haven’t captured the entirety of spot coffee’s recent gains.

Contango refers to a premium in back-month futures made up of carrying costs. Suppose, for example, spot month coffee trades at $2.00 a pound while the next available delivery month sells for $2.05. The five-cent premium represents storage, insurance and financing charges incurred until the beans are delivered in the latter month. Contango is elastic, varying as supplies ebb and flow and as the cost of money fluctuates.

For investors in futures-tracking products like JO, contango can be costly. The reason is simple. To maintain constant exposure, the note’s index methodology calls for repeated “rolls” of its nominal futures positions. Just before a delivery date in May, for example, the expiring contract is sold and the next available futures contract — in this case, July — is purchased. Then, when the July contract is about to expire, the long coffee position will be rolled into the September delivery. And so on. The sale of nearby contracts and the purchase of deferred contracts at a premium erodes any gains made through appreciation in the commodity’s price and exacerbates losses during bear phases. JO noteholders have seen contango, together with the product’s 75 basis point investor fee, eat up more than 10 percent of spot coffee’s gains over the past 12 months.

JO may be not a perfect substitute for coffee futures, but it’s arguably the best way to get exposure to the market through a security wrapper. The cost structure’s steep, but given the prospects for coffee’s outsized gains, it’s the price that has to be paid.

Cocoa: After stair-stepping higher since last summer, the outlook for cocoa is dimmer than for coffee. Deficits are turning out smaller than originally forecast and a buildup in warehouse stocks makes oversupply a distinct possibility in the near future.

Topping action seems to be already in place as producers and large traders position themselves aggressively on the short side.

There’s no exchange-traded product offering exclusive short exposure to cocoa, but the iPath Dow Jones-UBS Cocoa Subindex Total Return ETN (NYSE Arca: NIB) is marginable and can be sold short, if shares can be located. That’s not always easy for size trades, though. Alternatively, there are options on NIB available, so put purchases or a variety of bearish spread trades can be tailored to individual risk tolerances and market expectations.

Like JO, this exchange-traded note tracks the front-month contract. The cocoa market’s contango presently acts as an upside risk damper for bearish trades.

The selfsame drought that’s put the kibosh on coffee growth has also shriveled the Brazilian sugar cane crop (Brazil is the world’s leading sugar producer). After years of surpluses, stocks could readily tip into deficit if other large producers, such as India and Thailand experience weather problems. For now, the market’s in balance, but prices are congesting in an ever-tightening band, suggesting an imminent breakout. The supply situation will likely sort itself out by early summer. In the meantime, SGG call or call spread purchases could be low-cost alternatives to outright buys of the ETN.

Cotton: Rounding out the soft commodity complex is cotton. Prices have risen sharply off a November base but are now stalled amidst weakening user demand and huge ending stocks in China. Outside of the People’s Republic, supplies remain tight. A stumble in the Chinese economy could unleash a flood of fiber on the world mart which, given the size of the hoard, would be extremely bearish. The smart money’s already moving to the short side.

The iPath Dow Jones-UBS Cotton Subindex Total Return ETN (NYSE Arca: BAL), like its siblings, tracks the front-month futures contract. BAL also supports an option market, making alternative strategies to ETN short sales possible. Roll costs in the cotton market tend to be much more volatile than those of other agricultural commodities. Consequently, returns earned by the ETN can vary significantly from the cash market.

Overall, the livestock sector — dominated by trading in live cattle and lean hogs — is topping.

Live Cattle: Cattle prices have spiraled to levels lofty enough to create demand destruction typical of a long-term cyclical market. Futures’ price backwardation — an indicator of tight supplies — is weakening. Given the parabolic move in cattle prices since last winter, a pullback of 25 percent is a distinct possibility.

Lean Hogs: The hog market, overcoming the effects of widespread disease that caused a supply shock, has already turned lower. Like the cattle market, backwardation is rapidly diminishing. As demand wanes and herds rebuild, nearby prices could be cut by another third.

Cattle and hog price are tracked by the iPath Dow Jones-UBS Livestock Subindex Total Return ETN (NYSE Arca: COW). About 46% of COW is weighted in live cattle, the other 54% in lean hogs. Options on COW can be traded by punters unwilling to short the ETN.

Corn: The year-to-date rally in corn prices has been punctuated by aggressive professional selling. The likelihood of good summertime weather in the U.S. corn belt together with high current prices has encouraged planting. That, in turn, is likely to raise ending stocks and put downward pressure on prices.

Given this, an autumn retest of corn’s January lows – a 20 percent price drop from current levels – is possible.

There’s a comparatively active market for options on the Teucrium Corn Fund (NYSE Arca: CORN), so put and put spreads can be bought as alternatives to ETF short sales. Unlike the iPath ETN line, Teucrium funds don’t track front-month futures. CORN, for example, buys the second and third futures on the curve as well as the contract expiring in the December following the third contract. The scheme is designed to mitigate the effects of contango and seasonality.

Structured as commodity pools rather than exchange-traded notes, Teucrium products bestow investors with K-1 returns at tax time instead of Form 1099s. That makes accounting more complex for short sellers of Teucrium products. Investors who go the option route, however, aren’t subject to K-1 reporting.

A more significant difference between the Teucrium and iPath universe is cost. Teucrium funds are expensive. Quite expensive. CORN investors give up 2.75 percent annually just to hold the fund. That’s a big hurdle to overcome for buyers, but may not be so problematic for short sellers. Or put buyers for that matter.

Soybeans: What’s good weather-wise for corn is also good for soybeans. Favorable growing conditions and a large increase in acreage are likely to put further pressure on the price of beans and the Teucrium Soybean Fund (NYSE Arca: SOYB) over the summer.  Record Argentinian and Brazilian supplies are already allaying fears about previously tight domestic conditions. By fall, bean prices could be pared by a third from their early summer peak, giving a big boost to bearish option trades.

Wheat: Bean and corn prices may be headed south but the path for winter wheat could suddenly veer northward if there’s a big shift in Indian production. An El Niño weather pattern is forecast to coincide with the Subcontinent’s summer monsoon season. The last coincidence in 2007-2008 forced India, the world’s third-largest wheat producer, to swing into a net import position.

An outright buy of the Teucrium Wheat Fund (NYSE Arca: WEAT) would be the play to make if it weren’t for the domestic climate forecast. Smart money has been heavily wagered on an improvement of U.S. weather for winter wheat. If a drought-busting rain event materializes, prices could drop sharply. A rain failure, on the other hand, could force shorts to cover in a seller’s vacuum.

Wheat may seem like a conundrum, but trading solutions can be found in the options market. For those wanting to play both sides of the weather trade, straddles or strangles, though somewhat pricey, can be bought. A pure El Niño speculation could be executed with outright call purchases or, to keep costs down, ratio call spreads.

*While the prevailing outlook for wheat is bearish, trading the explosively bullish El Niño effect can be done through long straddles/strangles or call spreads.

While agricultural commodities have collectively outperformed U.S. stocks in early 2014, investors and traders will have to be more selective going forward. Coffee remains positive, but most food and fiber markets show signs of oversupply and wobbling demand. Still, a weak monsoon season could turn things dramatically bullish for sugar and wheat.

Commodity-minded investors will need to employ a rifle shot rather than a shotgun to hit their profit targets this year. Monsoons notwithstanding, they’ll need to keep their powder dry.