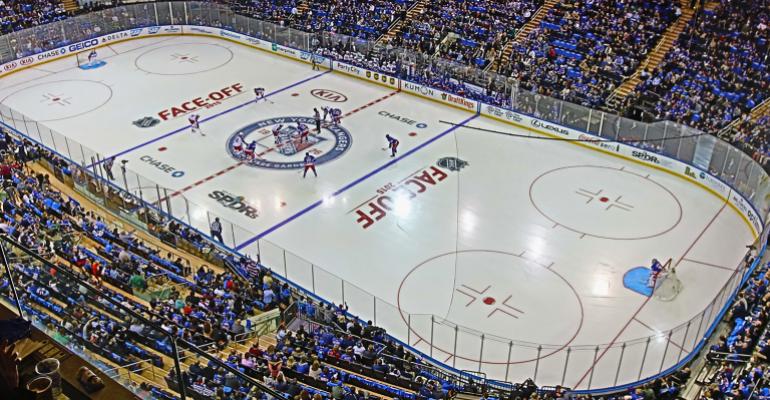 State Street's use of ‘12b-1’ fees provides hefty marketing budget.

(Bloomberg) --On the hockey rink at Madison Square Garden, painted on the ice near the New York Rangers logo, are four huge letters: SPDR.

As the players race back and forth, 18,000 fans look down at the glassy surface and white boards emblazoned with advertisements. Household brands like Coca-Cola, Chase and Dunkin Donuts pop out.

And then there’s State Street Corp.’s line of exchange-traded funds, symbol SPDR. Next to the other well known names, the logo, largely obscure to anyone not in the ETF market, looks out of place. Yet there it is.

The Garden’s just one of many unexpected locations you’ll see SPDR these days. Others include elevator banks at conferences, ads in golf magazines featuring Camilo Villegas and a black-and-white television commercial shot from a dog’s perspective.

State Street is one of the original ETF providers, and SPDR is among the most recognizable fund names. But none of that explains why it’s popping up all over the place -- or how the firm’s paying for it.

The answer is in a fee State Street charges known as a “12b-1” that goes to marketing, advertising and distribution. The Boston-based asset manager is the only U.S. ETF provider that levies it, and the fee only applies to its Select Sector SPDR series of funds. A few other firms have marketing costs in their expense structures as well.

Since the amount is based on a percentage of assets under management, and the SPDR funds carrying the fees have more than $330 billion combined, State Street has tens of millions of dollars available.

The charges are a relic of the Investment Company Act of 1940. The point was for mutual funds to stipulate marketing and distribution charges, which were expected to reduce costs by bringing in more customers and enabling the firms to capitalize on economies of scale. Early ETFs resembled mutual funds, so they adopted the costs. But that changed.

“ETFs evolved in a different way than mutual funds, and firms decided that 12b-1 wasn’t necessary or appropriate,” said Greg Friedman, head of ETF services at Fidelity Investments, which eliminated 12b-1 fees in 2015.

The Select Sector SPDR funds, which were launched in 1998 and track S&P 500 industry groups, hired ALPS Inc. to handle sales, marketing and promotion. The 12b-1 fees remain because they go directly to ALPS, which has a team dedicated to overseeing the sale of Select Sector ETFs.

Critics contend the charges basically are a way for funds to pay brokerage platforms for access. But ALPS maintains that State Street’s fee structure doesn’t permit that.

“The only potential problem is when the money is being paid out to someone, and we don’t have that,” said Dan Dolan, director of management strategies at Select Sector SPDRs, a subsidiary of ALPS that handles marketing for the ETFs. “There are no broker dealers. And no one is getting paid.”

A State Street representative referred questions about its marketing fees to ALPS.

The 12b-1 fee isn’t the only promotion charge embedded in ETFs. For example, the trust structure of Invesco Ltd.’s PowerShares QQQ fund mandates that a certain percentage of the assets under management go toward advertising. Other large ETF firms like BlackRock get the cash for marketing from their operating budgets, enabling them to keep the costs out of their expense ratios.

BlackRock spent $365 million on marketing and promotion in 2015 according to its most recent annual report, but it declined to break out how much was dedicated to ETFs or what the expenses were in 2016. A representative for PowerShares declined to comment.

For its part, State Street has honored the intention of the fees by reducing the overall cost of its funds. In 2009, expenses on the SPDR suite were 21 basis points, six of which came from 12b-1 fees. Now, the cost is 14 basis points, four from 12b-1.

“As assets have grown,” Dolan said, “the benefit is shared with everyone.”