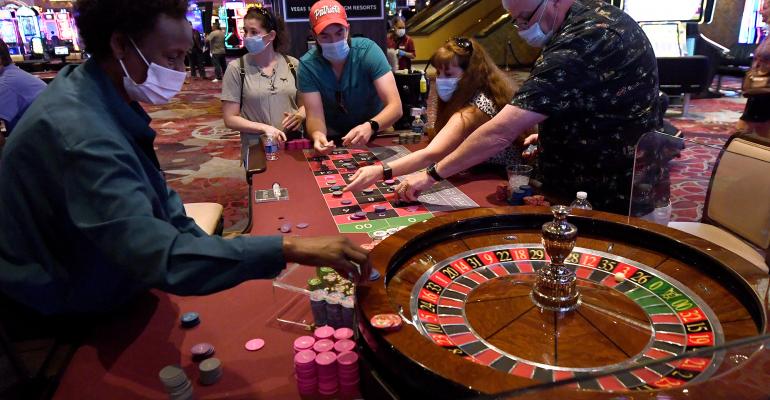 When ESG Investing Looks an Awful Lot Like Gambling

If regulators are really worried about an epidemic of gambling in the stock market, they need to look in the right place.

(Bloomberg Opinion) -- Last year, the UK’s Financial Conduct Authority issued a warning about investing apps: The “game-like elements” some of them come with — badges, points, leader boards, fun post-trade messages — might contribute to “problematic, even gambling-like, investor behavior.” There’s new legislation coming down the line, warned the regulator, so firms relying on gamification to get people trading might want to be “reviewing their products now to ensure they are fit for purpose.”

That’s about as strong an implicit threat as you get from the FCA, so I imagine there is plenty of conversation underway about what level of gamification is a good thing (it engages a new audience) and what is a bad thing (it makes that audience borrow money and use it stupidly). But if the regulator is really worried about an epidemic of gambling in the stock market, I wonder if they are looking in the right place.

The UK’s young people, after all, seem remarkably sensible with their investments: They mostly have auto-enrollment pensions (presumably invested in mildly overpriced but unadventurous open-ended funds by their providers), and they seem increasingly attracted to low-cost index funds with the money they invest elsewhere.

Vanguard notes that 74% of the clients it sighed up in the UK last year were under 45 and 41% were under 30. Vanguard products are fine, but there are no dopamine hits here. Hargreaves Lansdown, the UK’s most well-known investing platform — and one that does not offer in-app points — has also reported a rise since the pandemic in the number of younger investors opening accounts. Those who open HL accounts aren’t usually in it to top trader leader boards.

So who should the FCA be looking to if it’s not an easily led and irresponsible young? Let me suggest the professional fund managers.

Just look at what they’ve been up to. These are the people who (should) know that valuations matter — it’s the price you pay for an asset that determines the return you make. They know that diversification matters too, though limiting the universe of assets you invest in can cut potential long-term returns. They also know that a fast-rising supply of money leads to inflation (albeit with Milton Friedman’s “long and variable” lag), that inflation means rising interest rates, and that highly valued stocks struggle in rising rate environments.

Yet what did many of these experts do in 2021? They piled in to super-expensive American tech stocks and went mad for environmental, social and corporate governance goals — the latter of which not only limited their investment universes but came with no long-term evidence whatsoever that it might be a good idea. Gambling for a short-term dopamine hit? Who’s guilty now?

This brings me to this week’s most irritating initial public offering (I accept that there isn’t much competition at the moment). It is the Hypatia Women CEO ETF from Hypatia Invests, a company that provides “indices with a gender-lens,” such as the Hypatia Women CEO Index and the Hypatia Women Hedge Fund Index. The ETF, as the name suggests, is to track the former — or the 115 listed companies in the US that have market capitalizations of more than $500 million and are run by a woman.

The firm says you should invest for three reasons — to diversify, to “invest your values” and to “create impact.” That’s nice. Who wouldn’t want all those things?

In my experience, though, most investors want something else too: returns. Might they get them? The marketing says yes. It notes that the index did brilliantly in 2022, significantly outperforming the FT Wiltshire Small Cap Index. It has also outperformed that index by 3.04 percentage points since 2017.

But look a little closer, and you will notice that the two indices tracked each other until late 2020. The outperformance is only obvious for two years and might have something to do with small cap outperformance or perhaps the fact that the best-performing stock in the S&P 500 over the last year (Occidental Petroleum, up around 118% in 2022) is run by a woman. It might be up because it is run by a woman — or because it is an oil and gas company. Who can know? But the fact that this is not clear means it’s hard to argue that companies run by female CEOs outperform over the long-term.

It feels like maybe they should — not necessarily because women think or behave differently to men (sometimes we do, sometimes we don’t), but because as an old report from McKinsey suggests, getting to the top has been insanely hard for the generation of women now of an age to be at the top. Chances are good that the few who have made it are brave, brilliant and resilient in a way that most others aren’t. Yet, even though this sounds good, just as with ESG, we haven’t the data to truly know.

There haven’t been enough female CEOs, in enough different market conditions, for a long enough period of time, for the numbers we do have to tell us much of anything. It is also, of course, not exactly easy for men to become CEO of a company either. There is a little more evidence that having a lot of female leaders or a generally diverse group of executives in a company helps performance (and that female-led companies have more gender-diverse management groups). There are some products pandering to this idea. But, again, there is not quite enough to be sure.

Making nice-sounding but unproven ideas such a core part of one’s portfolio is more a gamble than sensible. It limits your investment universe — and, crucially — ignores valuation measures. That might have been just about OK during the great everything bubble that finally began to deflate last year. In 2023, it looks rather silly. In a time of crisis, why would investors use an unproven metric (CEO gender) over one they know (valuation plus diversification) will work?

Want more Bloomberg Opinion? OPIN <GO>. Or you can subscribe to our daily newsletter.

To contact the author of this story:
Merryn Somerset Webb at [email protected]