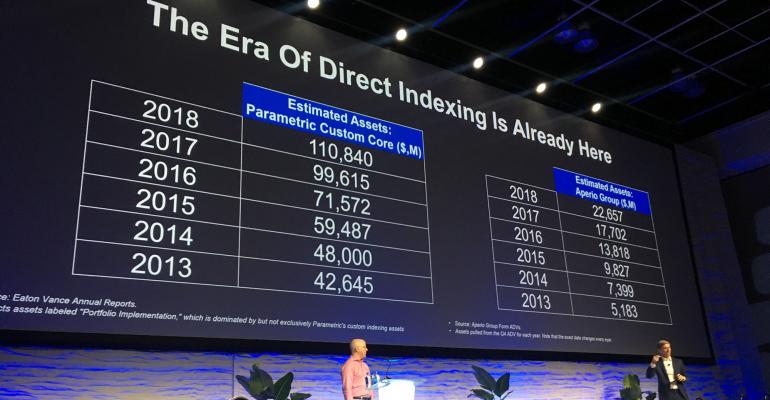 What’s Next in ETFs? The Great Unwrapping

The age of ETF domination is over, said Matt Hougan and Dave Nadig at Inside ETFs. Direct indexing is the next big disruption.

Inside ETFs Chairman Matt Hougan and ETF.com CEO Dave Nadig took the stage Monday morning at the Inside ETFs conference in Hollywood, Fla., and reiterated their prediction that ETF assets would eventually surpass mutual fund assets in the coming years. But the age of ETF domination is over, Hougan declared. And with any technology, it’s never the end of history; something will disrupt the space.

The next big thing in investing will be direct indexing, Hougan told attendees, a kind of separately managed account for the masses.

“Dave and I want to welcome you to the next phase of the asset management industry, what we’re calling ‘the great unwrapping,’ where your process of getting from wanting securities to owning securities doesn’t have anything in between—doesn’t have a fund structure,” Hougan said. “We think this is a major new development out there.”

The idea behind direct indexing is, instead of owning a wrapper with 500 stocks, an investor can own a personal index that owns however many stocks they want, optimized to track that index within a certain band of tolerance. An investor can customize a portfolio to fit their beliefs, customize it to their personal employment situation (to avoid concentration) and tax loss harvest.

“Most people in taxable accounts are leaving 1 to 2 percent per year in harvested losses on the ground because they’re not doing tax-loss harvesting,” Hougan said.

Direct indexing has been around; firms such as Parametric, owned by Eaton Vance, and Aperio Group, already offer direct-indexing strategies.

In fact, the quiet growth of this space reminds Hougan a lot of the ETF industry in 2003.

“In 2003, there were a bunch of us running around saying, ‘These ETFs are great. Look at the growth rates.’ And the mutual fund industry was like, ‘Talk to me when you have $1 trillion in assets.’”

Advisors stand to be big winners in the move toward direct indexing, Hougan said.

READ MORE FROM THE INSIDE ETFS CONFERENCE