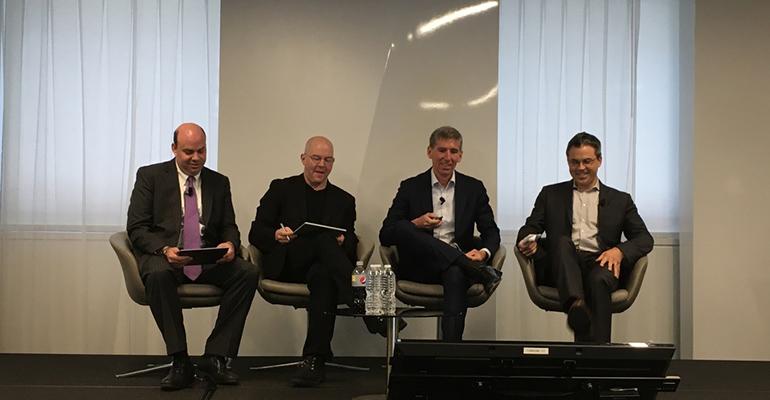 What Is the Best New Smart Beta Fund?

At the Inside Smart Beta conference, ETF experts debated four of the most popular smart beta ETFs on the market. But it was really an exercise in due diligence.

Smart beta is one of the hottest trends in exchange traded funds. In the last three years, about 160 new funds have been launched in the smart beta space. That’s more than one new product per week, said Matt Hougan, CEO of Inside ETFs.

All these new products are bound to leave advisors’ heads spinning. How do you separate the good from the bad?

At the Inside Smart Beta conference in New York last week, ETF experts picked apart four of the most popular smart ETFs on the market. At the end of the debate, the audience voted for their favorite. It was a fun, lively discussion, but should be considered an exercise in due diligence for advisors. Here’s how the arguments went down: Hougan started with the JP Morgan Diversified Return Global Equity ETF which, he argued, solves for the biggest concern investors have.

JPGE smooths the ride for investors on a global basis. The fund chops up the world into 40 different regions and industries, weights them by inverse volatility, and adds a factor screen to pick the best stocks. In a market cap weighted portfolio, the U.S. will account for 60 percent of the portfolio. JPGE takes it down to 25.82 percent.

“What you end up with is a portfolio that doesn’t make these massive overweight bets into the exact sectors or countries that are going to blow up your portfolio.”

Poking Holes in the Argument: Dave Nadig, CEO of ETF.com, argues that although it takes down the U.S. exposure, there’s now more weight in Japan, which accounts for nearly 23 percent.

Nadig believes you can get similar exposure for much cheaper. “All this fund is really doing is saying, ‘here’s a global portfolio. We’re going to remove a huge amount of home bias.’ Can’t you do that using eight basis point funds?” “Most smart beta, in my opinion, is somewhat counterfeit,” he said. “It’s got too much beta. It doesn’t have the factors. We all agree that some factors are real; value [and] momentum are real factors. You can debate the other ones.”

With most factors, Balchunas said, you’re buying a lot of the stocks you already own. This fund, however, screens for value and kicks out some of the junk using forensic accounting. It has a price-to-earnings ratio of 13, compared to 19 for the Vanguard Value ETF and 20 for the S&P 500. “This is definitely value.”

It should not be a replacement for your Vanguard fund, however, but something to sprinkle on the edge of your portfolio. It can also be used as a hedge against what he calls “passive hype.”

“Everybody’s piling into IVV and the S&P 500 index funds. Aren’t the ones that are heavily weighted in indexes going to be a little overvalued because of the rush to passive? This thing is where that isn’t. None of these stocks are in big indices.”

Poking Holes in It: But half of the portfolio is in consumer discretionary, rebutted Todd Rosenbluth, senior director of ETF and mutual fund research at CFRA.

Plus, it charges a whopping 79 basis points and it trades at five to 10 cent spreads, Nadig said. Rosenbluth’s pick was the PowerShares S&P 500 High Quality Portfolio (SPHQ), which invests in the bluest of blue chip stocks, such as Boeing, Home Depot, PepsiCo and Proctor & Gamble. The portfolio has to meet a rigorous screen for quality, including a high return on equity and accruals that are positive from an earnings standpoint.

It trades with a penny bid-ask spread, and the stocks in it are undervalued, according to Rosenbluth’s research team at CFRA.

Poking Holes in It: “The only concern I have about this and several of the other smart beta funds that fish from the S&P 500 is you’re really limiting your universe,” Nadig argued. Most of the holdings make up 5 to 6 percent of the portfolio, while the top 10 are almost half.

"This is a very top-heavy portfolio,” he added.

And Rosenbluth talked about being in the market during a pullback with this fund, but the fund underperformed the market by 14 percent in 2008. This was Nadig’s choice, arguing that Morningstar’s methodology is a very active management way of thinking about stocks. They look for companies with sustainable advantages and try not to overpay for them. That includes things like patent protections, dominant brands and cost advantages.

“These are all really business school 101 things.”

Morningstar analysts come up with a concentrated 40-stock portfolio across sectors, and have eked out small incremental performance year after year.

“It’s trying to actually do something unique with its portfolio, as opposed to just reskinning another factor. It trades like water. It charges a fairly reasonable sub-50 basis point fee,” he said.

“I think this is something that you’d want to replace some of your overall U.S. equity exposure with.”

Poking Holes in It: “Just to poke back at you: ‘This is like a classic active management approach to picking stocks,’ which has worked so brilliantly for the actively managed industry for the last 80 years,” Hougan said.

To get into the fund, it’ll cost you 49 basis points.

“In the end, it’s relying on a bunch of 26-year-old analysts at Morningstar to evaluate the fair value of individual stocks, then bubble that up into a concentrated portfolio that’s 28 percent weighted into health care right now and avoids three or four sectors, despite you saying that it’s diversified across the sector space,” Hougan added.

And the Winner Is: Hougan and his argument for the JP Morgan Diversified Return Global Equity ETF, with 35 percent of the audience’s votes. Balchunas came in second, with 29 percent of the votes.