Getting a discount through the options market.

Climate change is most certainly not being denied by investors in the Invesco WilderHill Clean Energy ETF (NYSE Arca: PBW), a diverse mix of wind, geothermal, solar and biofuels company stocks that’s been around for 15 years. PBW investors have embraced alternative energy in a big way over the past 12 months. And I mean in a BIG way. PBW’s price has soared nearly 65%, more than double the contemporaneous gain of the SPDR S&P 500 Trust (NYSE Arca: SPY). 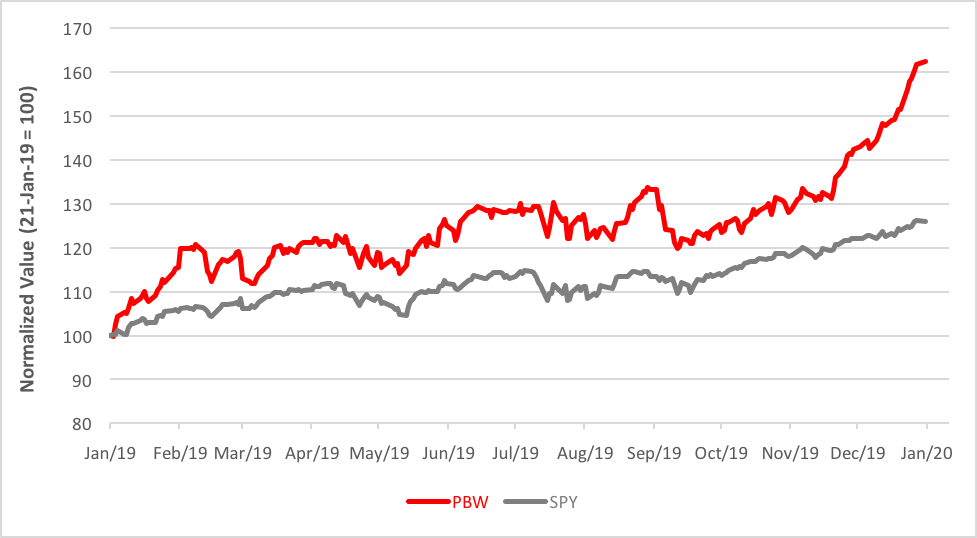 Now, when I see such momentum, I typically think that there’s a correction coming. And, in fact, I heartily hope so. You see, the long-term charts indicate that PBW—now trading at the $38 level—has the technical chops to rise to $53 over the long run. But there’s a gap in PBW’s daily price trajectory at the $36 level that begs to be filled and a trend line crossing through the $34 level may very well be challenged before the next leg up.

Many FOMO investors might be tempted to place open-ended limit orders under the current market in the hope of capitalizing on a pullback. That’s not a bad idea. But I’ve got a better notion. Why not get paid for placing that buy order? That’s exactly what happens when you sell a cash-secured put on PBW shares. To do this, you write out-of-the-money contracts and simultaneously bank enough cash or T-bills to buy the fund shares should the put be exercised by the buyer.

Short puts? Sounds scary, doesn’t it? But it should be no more frightening than outright fund ownership. After all, what’s the worst that can happen? You get assigned and own the ETF at the strike price (less the put premium received), that’s what. You’d then be exposed to the same downside as any other PBW owner, except you’d have a lower cost basis.

Of course, like holding an open limit order, you’d risk missing out on the ETF’s price appreciation if its current climb doesn’t abate. Oh, you’d get to keep the premium at expiration, but you’re then left with a decision to either repeat the short put strategy at a higher strike price or accept that the ETF opportunity just got away from you.

To put the position’s risk in perspective, consider this: The risk-reward profile is identical to that of a covered call. And who thinks of a covered call as particularly dicey? This, of course, presumes you actually have the desire and the wherewithal to own PBW shares. And the option account approval, too.

The PBW March $36 put seems a suitable candidate for cash-secured write now. At last look, the option, if assigned, would make you a PBW shareholder at an effective price of $35.55, a couple of bucks below today’s price.

For the right investor, a cash-secured put is like a discount coupon. One that gives you the markdown before you buy the goods.