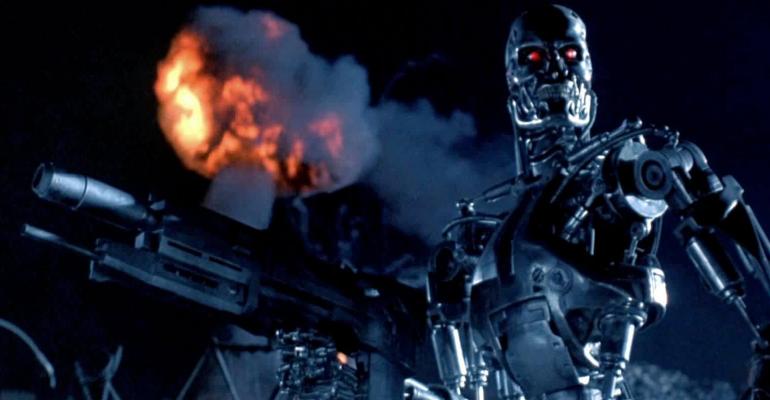 Vanguard's Not the Only Threat to Active Managers

Goldman Sachs has built the ETF equivalent of a killer cyborg calibrated to exploit the growing world of fee-based advisers.

(Bloomberg Opinion) --Truly passive index and exchange-traded funds are winning over many financial advisers. There are some holdouts among these middlemen who look after perhaps as much as $25 trillion. They are not rushing to move their clients into cheap beta-style ETFs for fear of seeing their own value diminished. But at the same time, these fee-based advisers and their clients may want to move away from out-of-favor and expensive active mutual funds.

Enter Goldman Sachs Group Inc., which has built the ETF equivalent of the T-1000 Terminator, a killer cyborg fund sent from the future perfectly calibrated to eliminate human managers by exploiting the growing world of fee-based advisers. The firm’s Goldman Sachs ActiveBeta U.S. Large Cap Equity ETF, or GSLC, is a multi-factor fund loaded with all the bells and whistles a fee-adviser goes nuts for, which should scare the daylights out of an active fund manager. GSLC has taken in cash in all but two months of its three or so years in the market, accumulating $3.5 billion in assets even though it has underperformed, an unheard of feat for a smart-beta ETF.

GSLC’s success is spawning a new generation of similar multi-factor ETFs from the likes of JPMorgan Chase & Co. and Fidelity Investments. Even ETFs from BlackRock Inc. and Vanguard Group Inc. that are priced for next to nothing and could end up stealing a large portion of the (remaining) assets from active mutual fund managers. So what exactly makes GSLC a force to be reckoned with? There are five main components:

Cost: GSLC charges an absurdly low fee of 0.09 percent, which is 10 times cheaper than the average active mutual fund and five times cheaper than the average ETF. The fee “opened up a lot of doors for us,” Michael Crinieri, the global head of ETFs at Goldman Sachs Asset Management, said in an interview on ETF IQ on Bloomberg TV. The dirt-cheap cost is hyper-appealing to advisers who have moved to fee-based models, as opposed to the fading commission model. They know cost is a key variable in predicting performance and it allows them to better protect their own fees. Let’s stop for a minute and just take note of that last sentence because it is the single-biggest driving force all fund flows for the past 10 years — and likely the next 20 years.

Quant: Factor investing is hot, winning over the clients of traditional discretionary active managers. Factor investing looks for characteristics of stocks that academic studies have shown to explain outperformance over time. Factor investing is typically rules based, meaning it effectively removes emotion from the equation. The most popular — and respected — factors are value, momentum, quality and low volatility. The problem for many advisers is trying to figure out which factors to use and when. GSLC attempts to solve this by combining four factors into one fund using separate sub-indexes with their own calculations, as seen below.

Brand: ETF investors favor products with some brand recognition, if not rock-star sizzle. Goldman is a top-shelf brand. If a smaller or less-established firm offered the same product, even for the same fee, it likely wouldn’t as big a smash hit as GSLC. Being able to offer clients a new quantitative strategy that was once reserved only for Goldman’s institutional clients is appealing to any investor and part of the ongoing democratization of investing ushered in by ETFs.

Safety: GSLC is very similar to the S&P 500 in that its top five holdings are the same: Apple Inc., Microsoft Corp., Amazon.com Inc., Facebook Inc. and JPMorgan. It has a 98.5 percent correlation to the stock market thanks to a 73 percent overlap with the index, which is almost double that of a typical active mutual fund at about 40 percent (which have long been criticized of “closet indexing”).  It is arguably a bad strategy investment-wise to hug the S&P 500, but in terms of asset gathering it is a great strategy because it allows advisers to tell a “story” without the risk of significant underperformance. Most adviser clients do not have the stomach for a more pure, highly active style of factor investing. That’s what some daring, and unfortunately unloved, ETFs attempt to do. These products are typically used in smaller portions to complement the core of a broader portfolio, whereas GSLC can be used to replace the core.

Taxes: The topic of taxes is boring, which is why you don’t hear much about one of the big problems with the mutual fund structure: capital gain distributions. Mutual fund investors have to endure getting taxed based on what the fund does and then again when they sell shares of the fund. GSLC utilizes the ETF’s brilliantly designed creation/redemption mechanism to eliminate any gains inside the fund. GSLC has made no distributions. The taxes saved by an ETF can seriously compound over time, creating what some refer to as “tax alpha.”Tax efficiency, check.

Add it all up and it doesn’t really matter that GSLC will likely outperform by a small margin in some periods and underperform in others. The product is so powerful and interesting because it is essentially an active strategy that isn’t dependent on returns to rake in assets.  So, after Vanguard and BlackRock are done ravaging active mutual funds, human managers will have to do battle with a new breed of ETFs such as GSLC over what is left.

Good luck with that.


To contact the author of this story: Eric Balchunas at [email protected]