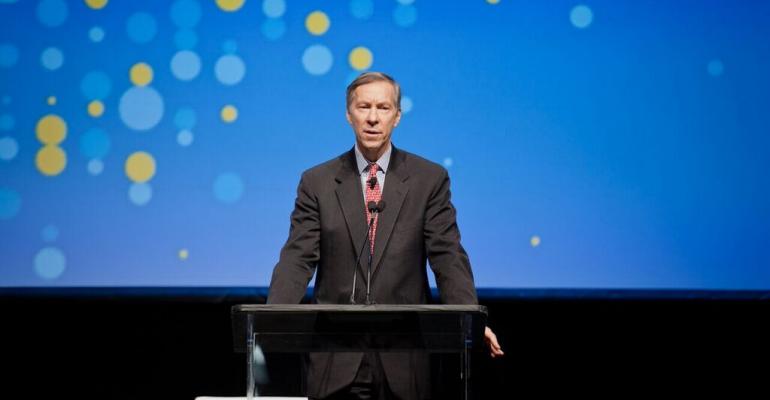 Advisors can’t compete on investment management; they should be generating “alpha” outside of security selection, McNabb says.

Is Vanguard in competition with financial advisors?

Considering the asset management giant's own automatic advisory service for investors, Personal Advisor Services, quickly grew to over $30 billion in AUM after officially launching in May, “it would be naive to think there wasn’t some level of competition,” said Bill McNabb, Vanguard’s CEO and Chairman, speaking to advisors at the Inside ETF conference in Hollywood Fl. Monday.

“But we started as a do-it-yourself shop,” he said. “And our target market is different. We’re taking our service down to investors with $50,000. It’s always going to be a virtual service. Not everyone will be comfortable with that."

Advisors need to get used to a world where they can’t compete by pushing their stock picking chops on clients, he said.

For one, the cost of portfolio management, dropping for decades, is still under pressure.  “That creates a mindset for investors,” he said. Even if the robo platforms sit behind a human advisor, it will force the advisor to rethink how they charge for their services.

Consider Fidelity’s acquisition of eMoney, Blackrock buying Future Advisor, Invesco buying Jempstep. All asset mangers will do something similar. “Even Snapchat is looking at getting into financial advice? I had to ask my twenty-year old. Snapchat has 100 million users.”

Further, advisors need to help their clients get used to the fact that they’ll be facing lackluster equity returns for the next decade. While the real return of a 60 percent equity, 40 percent bond portfolio since 1926 has been 5.5 percent, it will be 3 to 5 percent for the next decade. For advisors charging 1 percent, that’s troubling. “Think about costs as a percentage of returns,” McNabb said. Consider a 1 percent charge on a  5 percent return is tantamount to taking a 20 percent hit on that return. “That’s a number investors will think about,” he said.

The advisors that will be most successful will be those that can “tell their own stories,” and emphasize all the other things they do for clients beyond constructing portfolios; McNabb calls this the “advisor alpha,” including things like tax planning, estate planning, retirement income strategies and taxes - which could, he suggested, give client returns a 3 percent boost.

For clients in the accumulation phase, advisors will need to convince them to save more. For advisors nearing retirement, tax-efficient retirement withdrawal strategies will be critical. Those are the areas where advisors can prove their worth.

And while the ETF revolution is real, McNabb says he now worries about product proliferation. “It’s off the charts,” he says. There was a new ETF issued every day last year. “It reminds me of the mutual fund craze in the late eighties and early nineties, and that did not end well.” Some of the categories of the new issues are pretty esoteric, he said. It’s worrisome, because as some of these ETFs inevitably fail, it tarnishes the industry and investors get worried.

When it comes to the proliferation of so-called “smart beta” ETFs, Vanguard is skeptical and considers the funds “an active management bet.” “For people who have a view on the market, it can make sense, but it’s still an active bet.” While Vanguard has some factor funds overseas, it has none in the U.S. market.

While there may still be room for innovation in the ETF marketplace, he said, “slicing the market into finer and finer sectors probably won’t be successful."