There’s momentum in these stocks.

Investors are naturally drawn to stocks they think are set to rise. Utility investors are no exception, though dividend income and low volatility are prime drivers for most. Throw in the potential for a little capital appreciation? Sure, why not?

That’s why the recent price action in two utilities has caught the attention of chart watchers. The stocks of both companies spent the past month building double bottoms and now they’re breaking out to the upside.

The AES Corporation (NYSE: AES) is a Virginia company formerly known as Applied Energy Services, Inc. In addition to its power generation and distribution operations in the mid-Atlantic states, AES also has a diverse portfolio of international business ventures. AES shares bottomed recently at $15.70 and seem to be aiming for a near-term objective of $17.65.

Pennsylvania-based PPL Corporation (NYSE: PPL) is a holding company that delivers power to customers in Pennsylvania, Kentucky and southwestern Virginia as well as the United Kingdom. The nadir for PPL shares was $29.61 back in May. The stock’s breakout sets $31.75 as the aiming point for the immediate term. 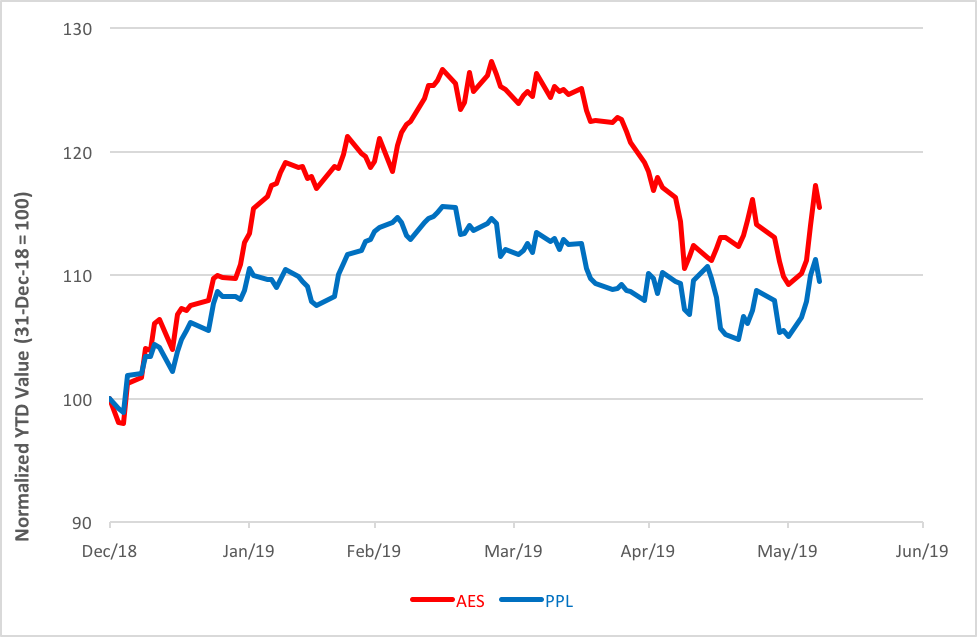 These short-term price objectives will likely be dismissed by momentum traders looking for bigger paydays. It’s worth noting, though, that the particular bottoming action exhibited by these two stocks historically sets up ultimate price gains averaging 47 percent over the longer term.

It’s not that other utility stocks don’t have upside potential. They do. And they’ve already enjoyed significant gains this year, at least as evidenced in the price trajectory of exchange-traded utility funds. The good news for bottom pickers is that some of these ETFs hold outsized (relatively speaking) positions in AES and PPL.

Take the Invesco S&P 500 Equal Weight Utilities ETF (NYSE Arca: RYU) for example. It devotes 3.2 percent of its real estate to AES and another 3.3 percent to PPL. RYU invests in the very same stocks that make up the Utilities Select Sector SPDR (NYSE Arca: XLU) but the Invesco product shuns the capitalization-weighted approach in favor of weighting each of its 28 holdings equally. XLU gives over 2.8 percent of its space to PPL and just 1.4 percent to AES.

So what’s all this mean? Simply this: Whatever happens to PPL and AES is likely to have a bigger impact on RYU’s pricing than XLU’s. Potentially, 50 percent more bang.

In fact, there appears to be enough ooompf! in the RYU portfolio to propel the fund another 25 percent higher over this economic cycle.

That’s not a bad prospect for a bunch of large-cap dividend crankers.

Note: RYU’s not the only ETF with capacious dollops of AES and PPL. The First Trust Utilities AlphaDEX Fund (NYSE Arca: FXU) also allocates an aggregate 6.5 percent of its capital these two stocks.