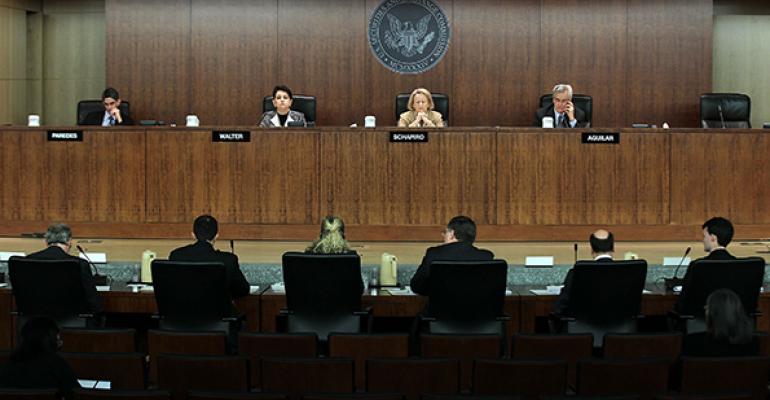 A proposal by the U.S. Securities and Exchange Commission to clamp down on how funds use derivatives has industry officials worried that some exchange-traded funds may have to close or change their investment strategy.

The rule proposed on Friday would require funds to hold cash reserves to cover potential future losses on derivatives.

A number of popular ETFs could be disabled by the rule, some analysts said. Some 163 ETFs representing $26.9 billion in assets use derivatives to double, triple, or provide the opposite of the returns of an index, such as the S&P 500.

They would either have to cut that leverage, close their fund or convert their funds to a different kind of structure that is less appealing to investors if the proposal is passed as is, said Dave Nadig, director of ETFs at FactSet Research Systems Inc.

But managers of the funds most likely to be affected were less pessimistic.

"Ultimately, we believe we will be able to continue to offer leveraged and inverse mutual funds and ETFs to help investors manage risk and enhance returns," said ProShare Advisors in a statement emailed to Reuters. The company said it would evaluate whether it would have to make any changes to the management of its funds after reviewing the proposal.

Derivatives are financial securities, including swap agreements and options contracts, that are valued on the basis of another asset instead of having their own intrinsic value.

About $36 billion is invested in U.S. ETFs that aim to juice returns by multiplying the returns - or their inverse - of some indexes, according to Morningstar Inc. Popular funds include the ProShares UltraShort 20+ Year Treasury, which attempts to deliver two times the opposite return of an index of U.S. government bonds that mature in about 20 years.

These funds use derivatives - such as swap agreements, in which the fund and another party agree to exchange the returns on a set of investments - to deliver their results.

Because derivatives may not be as easily traded as stocks and bonds, this could produce more risks. The counterparty might not be able to pay off the terms of the swap during a big sell-off, for example.