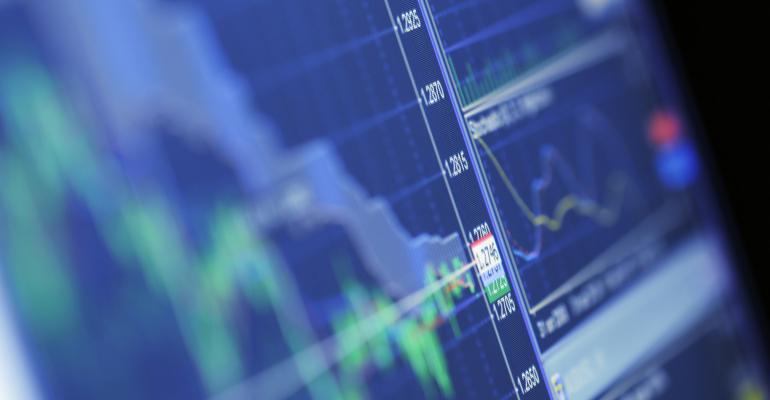 These ETFs are a good fixed-income option for investors suffering bond-market jitters.

Does it seem like interest rates have trebled over the last two years? Well, short-term commercial lending rates certainly have. A quick glance at a chart of three-month London Interbank Offered Rate (Libor) tells the tale. Since June 2015, the U.S.-dollar rate has climbed from 28 basis points to 131 basis points.

In the meantime, a lot of fixed-income investors have suffered a bad case of the interest rate jitters. Bond prices, especially at the long end of the yield curve, have been extremely volatile. The standard deviation for the iShares 20+ Year Treasury Bond ETF (NYSE Arca: TLT) share price is now a very stock- like 12.9 percent. Even paper with middling durations, say at the five- to seven-year level, have been whipsawed. The iShares Core Aggregate Bond Index ETF (NYSE Arca: AGG) has bronco bucked in a $6 range since the summer of 2015. And for what? AGG’s share price is now at the same level as it was two years ago. And the high-yield market? Even more volatile. The iShares iBoxx High Yield Corporate Bond ETF (NYSE Arca: HYG) share price wobbles at twice the rate of AGG (see Chart 1). The reason for the volatility? Inflationary expectations -- now moderating -- which ballooned in the aftermath of the U.S. presidential election. Short maturities like Libor aren’t influenced so much by inflationary expectations. Liquidity – meaning money supply – holds more sway at that end of the yield curve.

You’d think the folks who bought floating rate notes and funds a couple of years ago would be tickled by Libor’s climb. Especially those that bought those high-yield notes known as senior bank loans. Why? Because the interest due on most bank loans is specifically keyed to the three-month Libor rate.

Let’s not get a head of ourselves, though. Perhaps a little primer on senior bank loans is in order.  After all, it’s been more than a year since we last covered floating rate instruments in “Floating Rate ETFs In Flux” here at Wealthmanagement.com.

Bank loans are syndicated credit facilities made to commercial enterprises. Typically, these are medium-term loans maturing in seven years with interest rates that float at a certain level above three-month Libor. Since the rate resets periodically – most often, every 90 days --these loans carry little interest rate risk. They do, however, convey credit or default risk which is reflected in their less-than-stellar credit ratings.

The “senior” in the bank loan moniker refers to the loan’s position in the borrowing company’s debt structure. Bank loans, which are often collateralized by a specific corporate asset, have priority over a company’s unsecured bonds and preferred stock. This mitigates some of the default risk.

There’s often a “floor” built into bank loan agreement, too, which stipulates a minimum reference rate for periodic resets. Whenever a floor is present, the loan’s coupon will be keyed to whichever is higher, the floor rate or Libor. Each loan also specifies a spread over the reference rate for coupon resets. Think of the spread as a fixed risk premium; it tends to be wider for lower-quality loans.

Perhaps an example would put all this into perspective. Suppose a loan is syndicated with a spread of 250 basis points over Libor and a 100 basis point floor. Let’s say the loan’s due for a reset today when Libor’s at 131 basis points. Libor, being the higher rate, becomes the reference for the reset. The loan’s coupon, then, gets adjusted to 381 basis points – Libor plus the 250 point spread. Should Libor reverse course and head downward, say to 90 basis points for a subsequent reset, the floor, being higher than Libor, would become the reference rate. Thus, the new coupon would be 350 basis points. As you can surmise, the impact of a falling Libor on a bank loan investor is mitigated whenever a floor is written into an agreement. Of course, the impact of high interest rates could ultimately have a deleterious effect on the borrowing company as high coupons make debt service more difficult.

There are three bank loan exchange-traded funds focused on U.S. high yield paper – two are index trackers and one is actively managed:

While the three bank loan ETFs hold approximately the same number of securities, that’s as far as their similarity goes. Cross correlations over the past two years are low. Or even negative: The price action of the actively managed FLRT portfolio is inversely related to the two passive funds. FLRT, in fact, is negatively correlated to both broad market bonds, represented by AGG, as well as high yield bonds proxied by HYG. BKLN’s price trajectory is fairly well correlated to HYG; SNLN’s less so (see Table 1). Active management has paid off over the past two years as evidenced by FLRT’s higher risk-adjusted return versus the two passive ETFs. FLRT has also performed better against the AGG and HYG benchmarks (see Table 2) with respect to alpha and beta coefficients.

So, how will bank loan ETFs fare in the future? That depends largely on the likelihood of a recession. In an economic downturn, default risk naturally rises. Presently, a recession is a remote possibility, so a normative default risk prevails. Over the past 15 years, the market’s default rate has averaged 2.6 percent. That doesn’t necessarily mean that the risk of loss is 2.6 percent, though. Remember, most bank loans held by ETFs are secured by collateral. Because of that, the actual recovery rate is high – on the order of 65 percent of the loss. That puts potential losses at less than 1 percent now (for those interested: 2.6% x [1 – 65%] = 0.9%.)