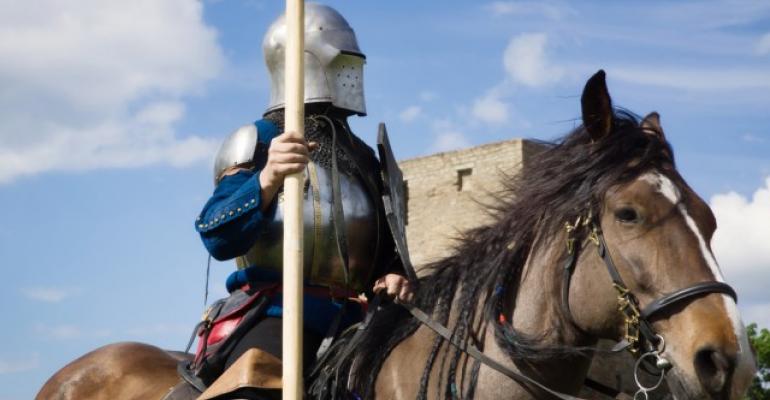 For Those that Want to Play Defense on Equities in Q4

You may need some Dramamine - or just a stiff drink - if you've been following the equity markets the past week. After metronomically lulling us to sleep for most of the year with low volatility, and predictable "mini-dips" of 3-4% followed by swift rebounds, U.S. stock markets have gone into ultra manic-depressive mode. On Wednesday, the S&P rose over 1.5% after dropping that much the day before. A head-fake that large hasn't happened in years. I wished for more trading volume on Wednesday's move, but it sure looked to me like a definitive reversal. But Mr. Market promptly responded by giving us the worst trading day of the year for longs on Thursday - putting the correction thesis squarely back into play while reminding us of what really is driving this market (central banking) and what is not (equity fundamentals).

I've heard quite a few investors lately talk about just wanting to preserve the modest gains they have for the year in their portfolios. They're nervous - if not scared - about the prospect of the first real stock correction in several years, a pullback in the 10-15% range that is a common element in nearly every healthy bull market. Some would even say it's a necessary ingredient to a next leg up in the markets.

But that doesn't mean you have to sit there idly and watch it erode your portfolio's gains. While I'm confident about the long-term direction of equities - and I try to evangelize smart asset & smart sector allocation above all else - I've been on the lookout for some exchange-traded funds that might reduce investors' exposure to big volatility swings, both in equities and fixed income.

Wednesday's huge intraday market rebound started when the FOMC minutes were released from their September meeting. The salient points coming out of those minutes were that Janet Yellen and the majority of the regional Fed chairs are keeping their dovish stance on interest rates, and they are interested (i.e., concerned) watchers of what's going on in Europe and with the U.S. dollar.

The swiftness and severity of the equity markets' move on Fedspeak really underscores its role as the main driver of index returns right now - much more so than corporate earnings. This won't continue to be the case - and it shouldn't be - but many investors were concerned that the "for a considerable period of time" language around raising rates was going the way of the dodo, and that Fed Funds rates could be increased as early as next spring.

Wednesday's language changed that, and now most watchers predict no rate hikes until at least the middle of next year here in the U.S. - which seemed to clear the way for markets to go higher, until European Central Bank head Mario Draghi made some really defeatist comments yesterday about the health of Europe.

Day-to-day stock prices are constantly climbing the wall of worry, and some days it just doesn't have the strength. Mr Draghi's comments highlight the notion held by some that the bulk of Europe is already in recession. Russian sanctions continue to stifle what little economic growth there was in the region, and of course we have the overhanging X factors of ISIL and Ebola, both of which could potentially cause black swan events around the globe.

Even though this is already one of the largest bull markets in history, I actually think we're less than halfway into this one. As much as I keep trying to talk myself into a future that is more "in line" with historical norms, every time I run a thesis in my head I keep coming back to the realization that equities are the optimal risk/reward choice in this environment.

First and foremost, domestic equity valuations are fair and full, but not overstretched - I can go into any sector in the S&P 500 and find dozens of quality stocks trading for PEG ratios of 1.0 or less, so there is real EPS growth expected out of what are, on the whole, modestly-priced stocks. If you extend your mental timeframe and exclude all the other market noise (and it's certainly noisy out there), earnings per share growth is really all that matters. That's timeless. But in the short-term, equities also have all these tailwinds:

1) Low interest rates favor stocks - why buy a 10-year bond at 2.3% when hundreds of really strong stocks pay dividends much higher than that? Just about everybody was wrong about the way bonds would move this year (including myself), but somewhere around 2% on the 10-year is about as low as we can feasibly go. And institutional investors know that the earnings yield on the S&P is above 5% - three full percentage points higher than the yield on Treasuries.

2) Corporate America has never been more liquid. There are record stores of cash and record operating margins. Cash provides flexibility and options, including returning that cash to shareholders via dividends and buybacks.

3) M&A is on track to set a record in 2014; although higher M&A activity has often occurred near market tops, I don't see that being the case this time around. I think this M&A cycle has quite a bit more room left to run, specifically because interest rates remain so low, debt is still plentiful, and again those record stores of cash on corporate balance sheets.

Strong M&A activity puts a nice, steady tailwind behind equities in any sector where it's occurring - like in healthcare, which has delivered the best sector returns of the year. The Health Care Select Sector SPDR (NYSE Arca:XLV) is up over 15% YTD, scorching the broader S&P by over 1000 basis points. And the XLV has a beta of just 0.75, so bulking up your sector weighting here is a great way to shave a little volatility off your portfolio.

4) Falling energy prices - For just about everybody (except the energy producers), falling prices at the gas pump and lower utility bills puts more money in our pockets. And if there's one thing U.S. consumers are great at, it's spending money.

5) Last but not least - Growth. We actually have it. Nothing special, mind you, but we should come in somewhere around 4-5% revenue growth and 8% EPS growth in the S&P 500 this year.

On the stock side, I definitely like beefing up healthcare allocations, as there are several strong secular trends in place - and the low Beta is a great kicker to have in this market. If you're curious as to the lowest-beta sectors out there, Utilities comes in way ahead of the pack at less than 25% of broad market volatility. Consumer staples come in second place (at right around 55% of the S&P 500's volatility), followed by healthcare.

There's a lot to like about Utilities when they're crushing the broad market like in 2014. The Utilities SPDR offering - Utilities Select Sector SPDR Fund (NYSE Arca:XLU) - is just a few basis points behind the Health Care SPDR, up over 14% this year in addition to its fat 3.49% yield. It's been a perfect cocktail of factors for utility stocks to rise this year; plummeting global yields and cash flow stability have made this bond proxy look like the prettiest girl at the bar.

That said, I'm not keen on the area going forward. P/E's in the sector are at the high end of historical ranges, and the stocks could become unusually volatile when the first whiff of rising rates makes its way through the bond markets. Plus, Capital Cube's analysis of those precious utility dividends tells me to be cautious, as nearly 70% of the XLU's holdings have less-than-stellar dividend quality.

Investors looking for a quick safe haven or seeking stable income could park money here through year-end, but I'd look for a more creative and flexible fixed-income solution for 2015 and beyond.

Consumer staples, our second-lowest beta sector of the year, can be picked up effectively with either State Street's offering Consumer Staples Select Sector SPDR Fund (NYSE Arca:XLP) or something like the Fidelity MSCI Consumer Staples Index ETF (NYSE Arca:FSTA) which has stocks like Coca-Cola Company (NYSE:KO), PepsiCo Inc (NYSE:PEP), and Proctor & Gamble (NYSE:PG) as its top holdings. These are all strong companies that I've recommended in the past, but I have some short-term fears of these and other large multi-nationals going into earnings season. The strong dollar could really weaken their guidance, and that presents some event risk we can try to sidestep. I'd look to avoid adding to staples positions until the bulk of Q3 earnings announcements are behind us.

A really proactive stance against lowering the volatility of your total equity exposure might have you wanting something like the iShares MSCI USA Minimum Volatility ETF (NYSE Arca:USMV). This $2.9 billion fund uses a passive index to find a broad base (150+) of companies across all sectors that have lower relative betas than their peers while also meeting certain fundamental thresholds. USMV pays over a 2% yield, pretty close to the benchmark Treasury, and carries a very competitive 0.15% expense ratio. I like the overall sector allocation - this fund is broad enough that if you're really concerned about volatility, you can swap out broad market index funds for some USMV and its 0.86 beta.