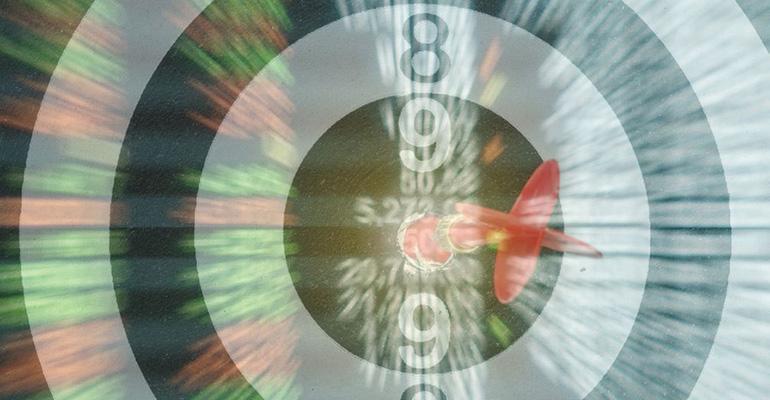 Wrapping target-date strategies inside an ETF hasn't worked. But some ETFs do target an investors' risk profile—for a fee.

Four years ago, the last target-date, or lifecycle, exchange traded funds withdrew to a rather ignominious retirement. You remember them, don’t you? They were supposed to be one-stop solutions for retirement portfolios which would dynamically allocate assets along a glide path—from higher to lower risk—as an investor aged.

It’s not that there was anything inherently wrong with the investment concept. After all, there are still plenty of target-date mutual funds around. Those funds are, in fact, the default choice in many employee retirement plans. The Investment Company Institute says $1.1 trillion was held in target-date mutual or collective funds at the end of 2017.

So how come wrapping target-date strategies inside an ETF didn’t accrue assets?

First of all, commissions. Many ETFs can now be bought commission-free through brokerage platforms, but not back then. Brokered target-date ETFs competed with analogs that could be purchased at no additional charge through retirement plans. What’s more, most investors didn’t even have the option to use ETFs—any ETFs—inside their retirement plans. Those enamored with target-date ETFs would have been compelled to use after-tax savings to buy them outside their employers’ plans. Clearly, not enough did.

Target-date ETFs may have disappeared, but asset allocation remains alive and well in the exchange traded space in the form of target-risk portfolios. Target-risk ETFs allow investors to hold fast to a certain style, e.g., “aggressive,” “moderate” or “conservative,” on a permanent basis. These funds allow investors or their advisors to more directly manage the glide path toward retirement.

The role of target-date funds is to continuously reallocate to asset classes—primarily equity and fixed income—over time. Ideally, they provide the investor with gradual but steady shifts from riskier equity investments into safer fixed income assets as the retirement horizon approaches. Consider them the spiritual ancestors of today’s “robo advisor” platforms.

Target-risk portfolios can also be used to create a glide path, but one that stair-steps onto discrete stages and stays there for a time. Target-risk ETFs put the investor in control of the progress along the glide path.

Two providers offer target-risk ETFs currently: BlackRock, through its iShares line, and Invesco, as sponsor of the PowerShares funds. The iShares family—the ETFs of ETFs—dominates the space, so we’ll focus our attention there.

AOA carries a subsidized annual expense ratio of 25 basis points (0.25 percent), but the actual acquisition cost of this portfolio, if it was assembled piecemeal by an investor, would be just 6 or 7 basis points. In effect, investors are paying 18 to 19 basis points annually for iShares’ packaging and rebalancing.

A classic 60/40 apportionment is targeted by the iShares Growth Allocation ETF (NYSE Arca: AOR). AOR owns the same iShares ETFs as AOA. In fact, all funds in the iShares target-risk cluster use the same components (see Table 1), but the fixed income allocations are upped at the expense of the equity exposure. AOR’s annual expense ratio, like all the ETFs in this line-up, is 25 basis points, making its convenience fee the same as AOA’s. 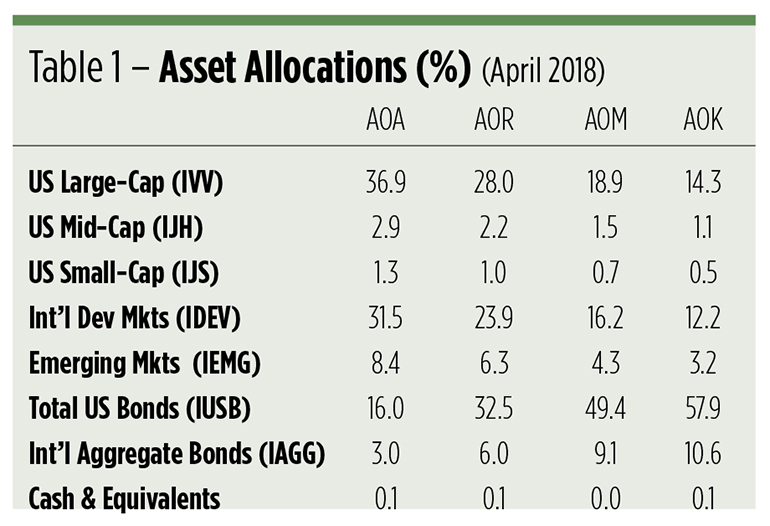 AOR, with $1.1 billion in assets under management, is the most popular target-date ETF and pays out a dividend of 1.84 percent.

Current income and capital preservation are the primary objectives of the $472 million iShares Conservative Allocation ETF (NYSE Arca: AOK), as evidenced by its target allocation of 30 percent equity and 70 percent fixed income. AOK cranks out 2.03 percent in dividends.

A hypothetical equity glide path is illustrated in Figure 1. This model presumes that the ETFs’ present equity allocations hold constant over the holding periods. That’s a pretty big assumption. After all, the iShares target-risk ETFs recently underwent significant reconstitutions as new lower-cost components were swapped into the portfolios. Still, the net equity exposures remained unchanged: AOA had an 80 percent dollop four years ago, just as it has now. There’s no guarantee, however, of such constancy going forward. (The funds’ current allocations are depicted in Table 1.) Allocations to fixed income assets provide two benefits to a portfolio: the receipt of current income and volatility dampening. Ideally, as investors swap into evermore conservative targetdate ETFs along their glide paths, volatility is managed downward by increasing exposure to fixed income assets. The volatility effect, however, isn’t linear. While the fixed income allocation steps up by approximately 20 percent for the first two transitions and about 10 percent for the last, volatility doesn’t move in lockstep. Exposure to the low-volatility factor grows from 17 percent in the aggressive AOA portfolio to nearly 100 percent in the conservative AOK fund. (See Figure 2.) This phenomenon is due to the interplay of the equity and fixed income sub-allocations within each ETF. Not only is overall equity exposure diminished in each transition, the influence of the most volatile components has also shrunk. Investors and advisors should take this into consideration as they make changeover decisions. 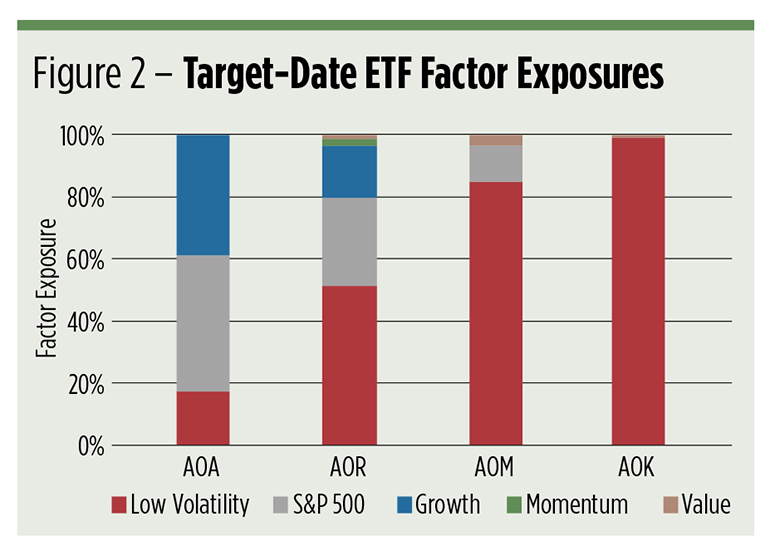 So, what kind of performance are target-risk investors actually getting? When the 60/40 AOR fund is benchmarked against a “homemade” 60/40 portfolio made up of IVV and the iShares Core U.S. Aggregate Bond ETF (NYSE Arca: AGG), the target-risk ETF seems to come up short on several measures. With annual rebalancing over the past five years, the model portfolio—at an annual cost of just 4 basis points—produced an average annual return of 9.1 percent, well above the 7.53 percent return garnered by AOR. (See Table 2 and Figure 3.) The model’s 1.42 Sharpe ratio and annualized alpha of 0.80 are also better than AOR’s. 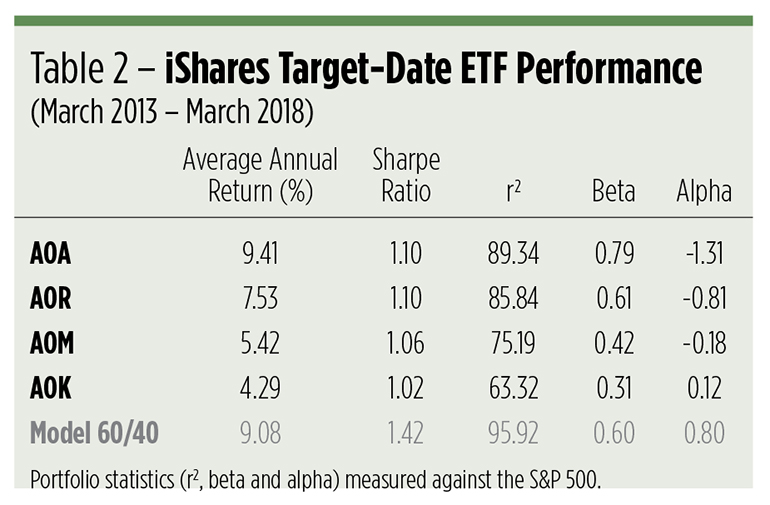 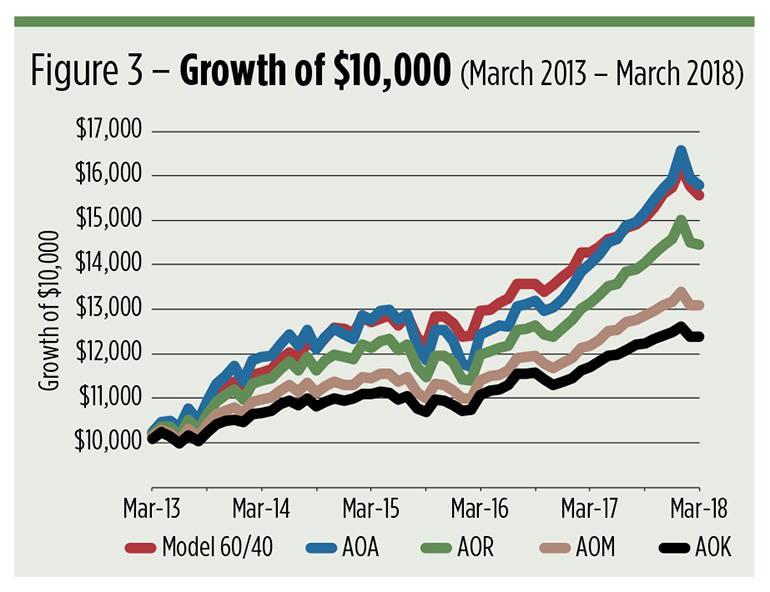 The model portfolio’s outperformance can largely be traced to its tight correlation to the S&P 500, as evidenced by its high r-squared (r2) coefficient. That’s certainly been a good thing during the domestic market’s recent bull run, but it might be a drag if U.S. large-cap stocks falter. AOR, with its more diverse asset base, might fare better as long as global stocks don’t outdo the S&P 500 on the downside.

Vis à vis the S&P 500, these target-risk ETFs are, to varying degrees, defensive portfolios. We know this by looking at their up and down capture rates. Capture rates reveal how much of the benchmark return a portfolio earns in a typical month. If, for example, the S&P 500 rises 1 percent in its typical “up” month and an ETF gains 1.4 percent in those months, the ETF’s up capture would be 140 percent. On the other hand, if the ETF was down 0.9 percent on average when the S&P 500 was down 1 percent, the down capture would be 90 percent. Table 3 outlines the up and down capture rates for the iShares target-risk ETFs, together with the derived probabilities of their outperformance in bull or bear market environments. 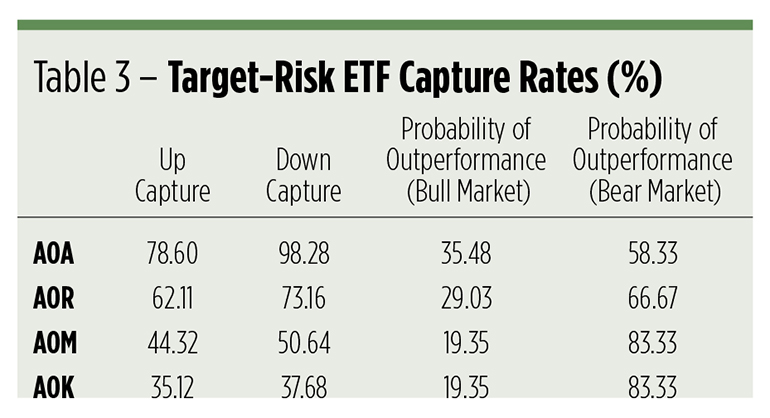 Target-date ETFs may be dead, but retirement-geared asset allocation can still be accomplished in the exchange traded portfolio space if investors and their advisors are willing to take target-risk ETFs in hand and manage their volatility exposure.

Primarily, however, investors should be aware of the convenience costs for packaging and rebalancing these funds. Hopefully, with the foregoing information, investors should be in a better position to decide between taking the packaged products off the shelf or building their own retirement portfolios.