T-Notes on a Tear

Playing them through ETFs is getting simple.

Just when everybody thought the bull was dying, it suddenly revived. And in a big way.

The bull? The bull market in bonds and notes, I mean. You may remember the chart below. It last appeared in an April column highlighting a developing market turning point. The graph depicts, on a logarithmic scale, the ratio of the S&P 500 Index (SPX) over the CBOE 10-Year Treasury Note Yield Index (TN.X). The beauty of the chart is in its distillation of secular market trends, which, for the past four decades, have been decidedly bullish.

Late last year, though, fear prevailed and threatened the uptrend. From the looks of the last few data points, you’d think that fear has dissipated. And, with the closing of the books on May, you’d be half-right. Stocks are still looking wobbly, but T-notes are on a tear. 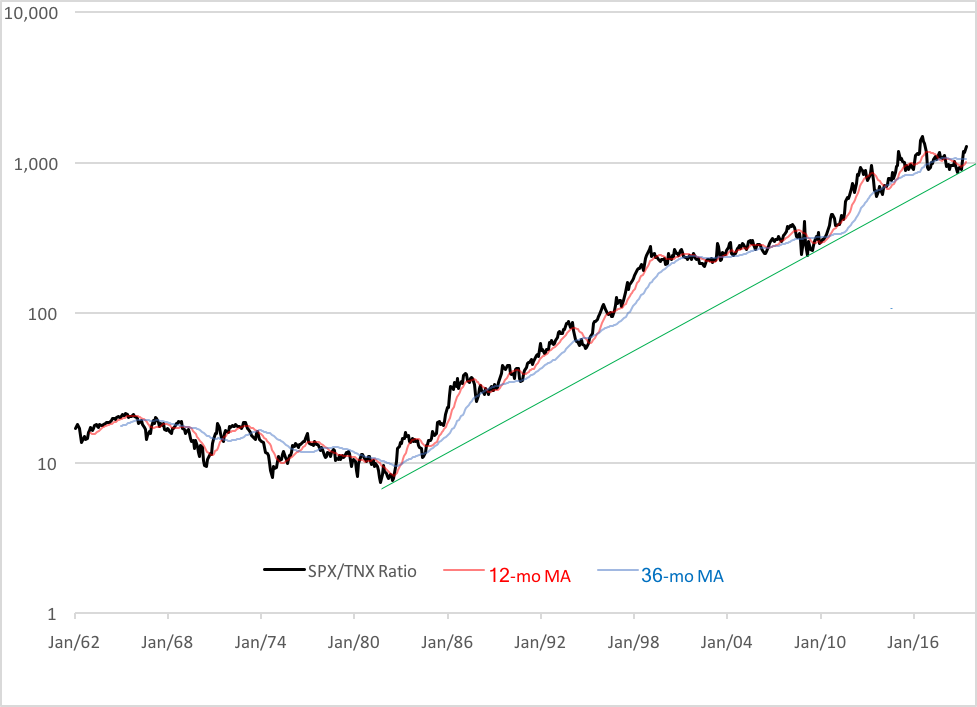 The S&P 500 lost 6.6% in May while the 10-year note wrapped up the month with a yield of 2.14%, 37 basis points lower than April’s finish. You’d think holders of exchange traded funds tied to 10-year paper would be cheered by this.

Again, you’d be right. But some ETF investors are happier than others. A LOT happier. Those most pleased hold the iShares 7-10 Year Treasury Bond ETF (NYSE Arca: IEF), which appreciated 2.8% in May.

Owners of three other intermediate-term Treasury ETFs had to content themselves with a gain nearly a full percentage point lower. Why? It’s all in the index tracking. IEF attempts to replicate the returns of the ICE U.S. Treasury 7-10 Year Bond Index, while the other portfolios are now benchmarked to the Bloomberg Barclays U.S. 3-10 Year Treasury Bond Index.

You can probably see where this is going. The $14.3 billion IEF portfolio, which is larger than all three of its competitors combined, is biased toward longer maturities and durations. That translates to higher interest rate sensitivity and volatility. The fund is populated by notes with an average maturity of 8.3 years, giving it an effective duration of 7.4 years.

And, while IEF’s rivals track the same index now, they haven’t always done so. That’s why their historic performance figures look so different.

Currently, the Schwab Intermediate-Term U.S. Treasury ETF (NYSE Arca: SCHR) weighs in with a duration of 5.2 years wrought from a portfolio of paper maturing, on average, in 5.6 years. A slightly shorter duration – 5.1 years – is credited to the Vanguard Intermediate-Term Index ETF (Nasdaq: VGIT), a fund with an average note maturity of 5.7 years. VGIT switched to the Bloomberg Barclays U.S. 3-10 Year Treasury Bond Index in the fourth quarter of 2017. It wasn’t until May 2018 that the SPDR Bloomberg Barclays Intermediate Term Treasury ETF (NYSE Arca: ITE) flipped to its present target. ITE’s prior benchmark leaned more heavily toward the shorter end of the yield curve. That bias accounts for ITE’s greater tracking error versus the 10-year note yield as well as its lower volatility and higher average return. Note, too, how ITE suffered a smaller historic drawdown compared with the other funds. At present, ITE’s behaving more like the other 3-10 year trackers. Its effective duration clocks in at 5.1 years with an average maturity of 5.5 years.

The table tells you all you need to know about the past and future performance of these four intermediate-term Treasury note ETFs. Trading in this segment of the yield curve is essentially becoming a binary proposition. Going forward, SCHR, VGIT and ITE are going to look quite a bit alike. The outlier’s going to be IEF. As rates ratchet downward – IF rates ratchet downward – IEF will hold the advantage in generating positive returns. That, of course, turns to a handicap if rates rise.

As always, duration has its price. On the way up, it just seems easy to pay.