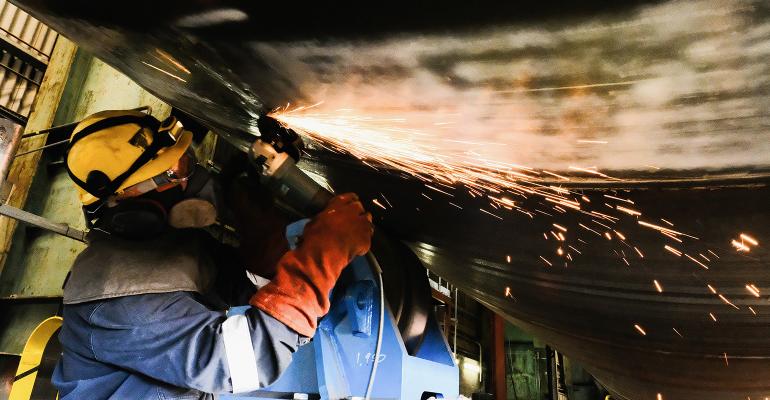 (Bloomberg) --Long before President Donald Trump has made good on his pledge to spend $1 trillion on U.S. infrastructure projects, investors already are seeing a big payoffs from domestic steel producers.

The VanEck Vectors Steel ETF delivered an 82 percent return in the year through Monday as shares surged in the industry it tracks, posting the third-best performance among non-leveraged exchange-traded funds in the U.S. A Bloomberg gauge of iron ore and steel producers --- which just a year ago was at its lowest since at least 2003 -- climbed more than 40 percent. Investors poured about $476 million into industrial-metals ETFs, and billionaire Stan Druckenmiller’s Duquesne Family Office boosted by 80 percent its stake in Nucor Corp., the largest U.S. steelmaker.

Trump isn’t the only one giving a boost to an industry that not long ago was mired in a global glut and years of losses. China, the world’s largest steel producer, has cut excess capacity and its exports have slowed after the U.S. and Europe imposed anti-dumping measures. Demand is also growing. All that helped to boost benchmark prices for American steel by about 55 percent in the past year.

“In general, all local producers should benefit either through regaining market share or better steel prices,” said Philip Ngotho, an analyst at ABN Amro Bank who has a buy recommendation on ArcelorMittal SA, the third-biggest holding of VanEck Vectors Steel. Enforcing anti-dumping measures “implies that part of the supply has been cut off, which of course, improves the supply-demand balance in their home regions,” he said.

Investors bought a combined 73.5 million shares in AK Steel Holding Corp. in the fourth quarter, increasing the total to 258.6 million, data show. Arrowstreet Capital, the biggest hedge-fund shareholder of AK Steel, more than tripled its stake in Rio Tinto, while more than doubling its holdings in ArcelorMittal in the fourth quarter, according to the firm’s filing for the period. Arrowstreet also added BHP Billiton Ltd. to its holdings while boosting its stake in Vale SA, Posco, Gerdau SA and Olympic Steel Inc.

Steel equities were also popular with money managers like Two Sigma Investments who use computer models to pick stocks, according to regulatory filings compiled by Bloomberg for the fourth quarter.

Months before Trump was elected, China was taking steps to curb excess capacity, improving the outlook for producers worldwide. The nation shut 85 million tons of capacity last year, exceeding its target of 45 million tons, Morgan Stanley said Feb. 23. The nation also set a mid-year deadline for the closure of illegal steel mills, accounting for about 5 percent of its 1 billion-ton annual capacity.

The cuts helped curb China’s steel exports by 23 percent in January to 7.42 million tons, the lowest since June 2014, according to customs data released Feb. 10.

While most of the holdings in the VanEck Vector Steel fund are makers of the metal, the top two are iron-ore producers Vale and Rio Tinto Plc, which supply the steel-making ingredient to China. Their rival BHP said iron ore is likely to come under pressure as prices soar toward $100 a ton.

Goldman Sachs Group Inc. analysts including Eugene King are neutral on Rio Tinto, even after the company’s dividend beat the bank’s estimate. The analysts said lower iron ore prices is one of the key risks to their target for Rio’s London-traded shares of 3,500 pence. The shares traded at 3,325 pence on Wednesday.

China’s plan to drive out high-polluting production will create opportunities for Rio Tinto as the country switches from low-grade to higher-grade ore, Chief Executive Officer Jean-Sébastien Jacques said at the company’s earnings call on Feb. 8. The Asian nation’s imports will probably rise 5 percent because of increasing demand for high-grade material, Peter Poppinga, the head of ferrous metals at Vale, said the company’s earnings call on Feb. 23.

In January, the European Commission applied duties of as high as 64.9 percent on Chinese and Taiwanese exporters of tube and pipe butt-welding fittings of austenitic stainless-steel grades. The tariffs were imposed when those countries sold the parts in the EU at below the cost of production, a practice known as dumping.

In the U.S., the government said on Feb. 2 it’s imposing an anti-dumping duty of 63.86 percent for imports of Chinese stainless steel sheet and 76.6 percent on steel strip. On Feb. 22, the department also slapped a 3.5 percent levy on imports of steel concrete reinforcing bar from Turkey’s Habas.

According to Barclays Plc analysts, anti-dumping measures helped to cut monthly U.S. steel imports to about 2.5 million tons in January, from 4 million in October 2014.

“For U.S. steel producers, whether there’s a border tax or not, we do feel that the new administration is more focused on dumping, whether that’s through pursuing WTO actions or otherwise,” said Ralph Bassett, the manager of the $1.6 billion Aberdeen U.S. Small Cap Fund. “That’s net positive in terms of steel pricing.”