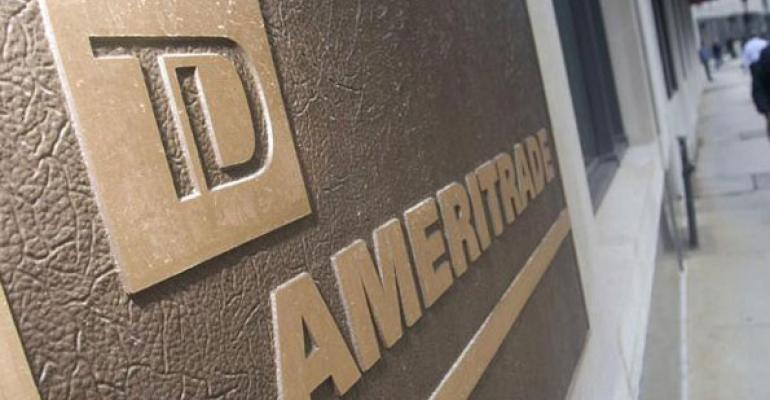 When Joel Sproul, an advisor with Kronos Wealth Management, first heard on Monday that TD Ameritrade was expanding its commission-free exchanged traded fund program, he thought it was a good thing. There were a couple holes in the existing lineup, he felt, and was hoping they’d add some technology funds, Gold and Silver exposures or other sector funds. Then he read on.

“The second part is, ‘We’re removing 84 funds,’” Sproul said. “I printed out the list, and I’m like, ‘these are the ones that I use.’ So it was a little bit frustrating.”

While TDA’s new commission-free ETF lineup expands the options from 100 to 296 funds, it removes 84 funds, including all of Vanguard’s products and many of the iShares style box funds. Many registered investment advisors on TDA’s custody platform took to Twitter to voice their frustrations. Many of them use Vanguard products in their existing client portfolios, so they either have to revamp their models to include ETFs on the new list or pay TDA’s $6.95 ticket charge.

TDA’s new commission-free lineup includes State Street Global Advisors’ new SPDR Portfolio ETFs, a suite of 15 low-cost ETFs, three of which will track new indices. Many of these new SPDR ETFs now have lower expense ratios than the lowest fee ETF in the category, according to State Street Global Advisors; for instance, the Vanguard Growth ETF (VUG) was on the platform, and charged an expense ratio of 6 basis points. The SPDR Portfolio S&P 500 Growth ETF (SPYG), which was 15 basis points, has been reduced to 4 basis points. But some advisors cautioned that trading costs could be higher for the new entrants.

“State Street is now a flagship provider of commission-free asset-allocation products on TD Ameritrade’s platform the same way that iShares has been for Fidelity and Schwab has been for their own platform,” said Todd Rosenbluth, director of ETF and mutual fund research at CFRA.

But the move rattled some advisors already using the platform. “It just seems like a step backwards in many senses, especially losing the Vanguard ETFs and a lot of the more familiar style-box-type ETFs that I think most advisors use,” Sproul said.

"With any business decision, client needs are paramount, but the underlying economics of programs can’t be ignored," said TD Ameritrade spokesman Joseph Giannone. "There are costs associated with servicing this growing platform, and so we restructured the program so that we could continue offering our clients commission-free trading across a greatly expanded menu of ETFs. In line with industry practices, certain providers pay servicing, administrative or other fees. Vanguard elected not to be a part of the new program."

Vanguard does not pay third parties to distributes its funds and ETFs.

A Vanguard spokesman referred WealthManagement.com to TDA for comment.

"At the end of the day, our goal is to deliver a bigger, better program that we can continue to expand and invest in for years to come," Giannone added.

“If you’re paying to be on a platform, regardless of how that payment happens, you’re going to be a little irked if Vanguard is on there without paying,” said Eric Balchunas, ETF analyst with Bloomberg Intelligence. “The problem though is that everybody wants those ETFs. It’s tough to remove something that everybody wants. So I guess they have to weigh irking existing clients versus irking other ETF issuers that might be paying to get on the platform.”

Blake Street, founding partner and chief investment officer at Warren Street Wealth Advisors, a registered investment advisor in Tustin, Calif., didn’t like the way the news was communicated to advisors and the brief timeline they were given to make adjustments. RIAs have about 30 days before customers will be charged a commission on funds no longer in the lineup.

“Literally every single client account that we have holds Vanguard ETFs, and in most cases, multiple Vanguard ETFs,” said Street, whose firm has about $96 million in client assets, $65 million of which is custodied at TD Ameritrade Institutional.

“For anyone that’s looking at the platform with a fresh set of eyes, it’s kind of a non-event,” he added. “But for firms that are already using the legacy no transaction cost platform, there’s a lot of considerations, such as all the clients that hold it as of now, especially in non-retirement accounts, how do you phase them out of those positions? If you do it all at once, are you incurring short-term cap gains or long-term cap gains? So you’re just essentially creating a taxable event to get it in line with the new updated ETF platform.”

Because the firm’s trading tool is coded to achieve scale, Street now has to find State Street equivalents of the Vanguard funds so that clients’ exposures are oriented around the same asset classes.

“Not allowing advisors to retain or be grandfathered, or given a longer timeline to adjust, I think is a little bit reckless on their part,” he said.

He said he has not made a decision about using another custodian. “Everything’s on the table, but I’m hoping there are more amicable resolutions available,” Street said.

Jason Newcomer, an advisor with Barber Financial Group, an RIA with about $1 billion in assets on TDA’s platform, said he found out about the news on Twitter.

“It came out of nowhere,” he said. “They had tried to spin it as, ‘Here’s this great positive thing. We’re expanding this list.’ And then, ‘Oh and by the way, click here to see the eighty-some funds that we’re getting rid of.’”

About 90 percent of the funds he uses in his book are Vanguard and iShares funds.

“One of the nice things about their platform had been the commission-free ETFs, and most of the ones we were using were Vanguard because we’re really fee conscious and drilled that into our clients’ minds.”

Now, Newcomer’s got to figure out whether to revamp his models and find good substitutes for those funds, or incur the ticket charge.

A lot of the State Street funds are new, with some based on new indices, so that will involve a lot of due diligence for advisors without much historical data.

“This all adds up to more time and more work for us and less time dealing with clients and real issues,” Sproul said.

Like many advisors, he'll weigh the cost of adjusting to the new offerings with the effort it would take to bring his business to a new custodian. “The thought (of leaving) has crossed my mind. The problem is it’s just so much work.”

Tell me about it. Rarely do I bitch about stuff, but there are no core funds to use which was crucial to my young clients and tactical strat

Ha. I can't wait. Who is running their pr/comm? Sheesh. It's like a grocery store taking milk, bread, and eggs off the shelves. Nohappyfolks

I was confused by the list, but didn't realize the eliminations. OMG!