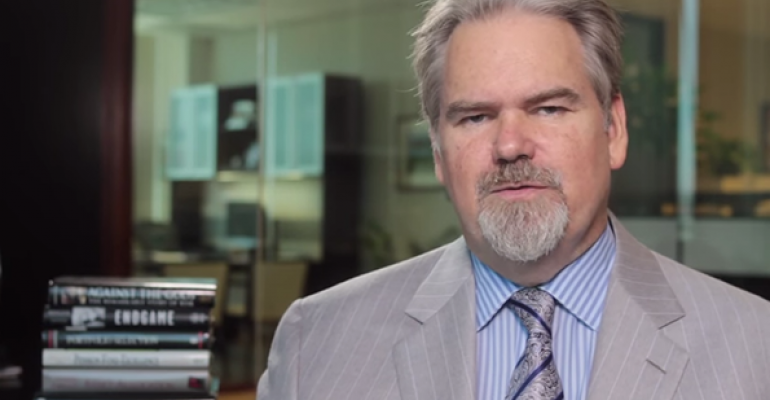 <p>Rob Arnott, one of the founders of Smart Beta, warned that a bubble might be forming in the investment discipline.</p>
Investment>ETFs

(Bloomberg) -- Trying to time the market is a dumb idea.

That in a nutshell is Cliff Asness’s opening salvo into an escalating war of words over smart-beta exchange-traded funds, triggered in February when one of the inventors of the approach said many had become too expensive. Asness, co-founder of AQR Capital Management, joins other theoreticians jumping in the fray, which goes to the heart of a strategy that bridges active and passive management.

While the debate has an academic ring, a lot is riding on who’s right. Smart-beta styles underlie about one in five ETFs globally with an estimated $400 billion under management, and if they plunged, millions of investors would be burned. The technique seeks to soup up index returns by ranking companies not by size but other properties or “factors” -- like what they earn or pay in dividends.

“This is a good conversation that’s happening,” said Todd Rosenbluth, director of ETF and mutual fund research at S&P Global Market Intelligence. “It’s good for the broader asset management industry to have an ongoing conversation about the merits of smart-beta products because they aren’t perfect -- they’re not gospel.”

At the center of the squall is Rob Arnott, star manager for Pacific Investment Management Co. and one of the founders of the discipline, who sent seismic shocks through investing circles in February with a paper warning that a bubble is forming in smart-beta funds. Many strands of the investing style succeeded only because of a stampede in popularity, and they are poised to crash, he wrote.

Enter Asness, the 49-year-old hedge fund manager who has argued in past research that valuation tools such as the Shiller price-earnings ratio have limited use for market timing. In a new paper titled “The Siren Song of Factor Timing” that’s mostly a response to Arnott, he said popping in and out of assets based on valuations is rarely a good idea and the principle applies no matter what wrapper stocks come in. In Greek mythology, the sirens were half-birds, half-women who used their beautiful voices to lure sailors into shipwreck.

“Factor timing is very tempting and, unfortunately, very difficult to do well,” he wrote, before explaining and defending his position in a series of e-mails over the weekend. “Nary a presentation about factors, practitioner or academic, does not include some version of ‘can you time these?’ or ‘is now a good time to invest in the factor?’ I believe the accurate answer to the first question is ‘mostly no.’ ”

Timing smart-beta strategies by buying when cheap and selling when valuations are higher is ultimately dangerous, according to Asness. Smart-beta managers have an incentive to claim they can do this as they seek to defend higher fees, but it’s unlikely that they can, he says. It’s better to have diversified exposure to a mix of factors that work over the long term, he said.

“I think that siren song should be resisted,” Asness wrote. “At least when using the simple ‘value’ of the factors themselves, I find such timing strategies to be weak historically, and some tests of their long-term power to be exaggerated and/or inapplicable.”

Arnott, chairman and chief executive officer of Pimco sub-adviser Research Affiliates LLC, has gone from being an icon of his industry to one of its biggest detractors. He said in February that many versions of smart beta were performing well only because of their popularity, with the exception being those tuned to cheap stocks -- a style in which his firm specializes and which has fallen out of vogue.

“Many of the most popular new factors and strategies have succeeded solely because they have become more and more expensive,” he wrote in the February treatise. “Is the financial engineering community at risk of encouraging performance chasing, under the rubric of smart beta? If so, then smart beta is, well, not very smart.”

Arnott was an early proponent when he developed fundamental indexing, which deploys criteria such as book value, cash flow and sales to select undervalued shares. Asness earned his doctorate in finance at the University of Chicago, studying under Eugene Fama, the godfather of the factor-based theory of investment, and adheres to a similar kind of approach today. While he’s often associated with momentum, the style that buys stocks that have been rising and sells those that are falling, he’s also a proponent of value smart beta.

Asness’s paper raises several technical objections to Arnott’s methodology, such as the use of long-horizon regressions for portfolios with high turnover, and says Arnott’s conclusions are convoluted and without merit. Not only that, he claims his peer is being deliberately alarmist, veering into “histrionic comparisons” to the technology bubble and the “quant crisis” of 2007 to scare investors. Ultimately, Asness says, trying to time factor strategies using valuations is just another form of the value style.

Arnott, in response, agrees it’s dangerous to aggressively buy factors that are trading cheaply and shun those that aren’t. Still, he says valuations can be used to adjust portfolios in a moderate way. What he’s cautioning about is the opposite kind of factor timing, piling into popular strategies, he says.

“It’s dangerous to ignore relative valuation outright, and to go ahead and load up on a factor just because its past performance has been brilliant,” the 61-year-old Arnott said in a phone interview. “Performance chasing is even more dangerous than the factor timing that he’s warning against.”

One point on which both investors agree is that a sharp downturn in smart-beta strategies is probably coming. Asness says he’s more “matter-of-fact” about this, not because he’s playing down its impact but because such crashes are inevitable and impossible to predict. Valuations, he said, didn’t foretell the period in August 2007 when many quantitative hedge funds posted large losses at the same time.

“I see this as an unfortunate pain we must bear in exchange for the long-term positives of good factors,” Asness wrote. “Again I make the analogy to knowing that the stock market will one day suffer a short painful ‘crash’ does not mean one doesn’t invest in stocks for the long run.”

Predicting the success of smart-beta ETFs based on valuations can be misleading, Jay Jacobs, director of research of Global X Management Co., said in March in reaction to Arnott’s paper. They can rise for factors such as low volatility or quality if people fear a market selloff and the higher levels won’t make them worse to own, he said. Alex Matturri, chief executive officer of S&P Dow Jones Indices, said many investors don’t expect smart-beta products to win all the time, and often use them for other purposes including hedging.

Asness’s prescription is to choose factors you believe in and stick with them over the longer term while expecting some difficult times along the way. The only exception is if valuations reach unprecedented levels, and we’re not there today, he says.

“Frankly, I think ominous-sounding references to the August 2007 event when valuations didn’t predict that event and are not at bubble extremes today (in either direction) amount to scare tactics essentially shouting fire in a surprisingly uncrowded factor theater,” Asness wrote.