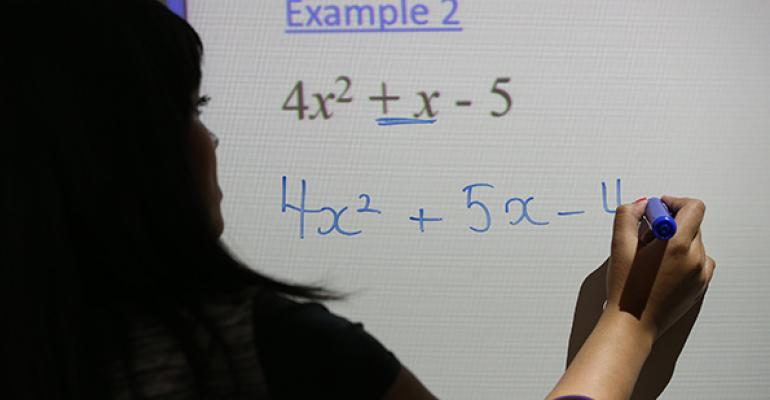 An unlikely superstar is emerging in the battle for ETF supremacy: the professor.

Over the last six months, the $3.6 trillion U.S. exchange-traded fund industry has plucked several prominent academics out of the classroom and put them on the corporate payroll. OppenheimerFunds Inc. has appointed a brain trust to help generate and validate ideas for new products. Research Affiliates, a strategy and index creator, hired a Duke University scholar as a partner and senior adviser. And one college professor on the outskirts of Boston even started his own fund.

It’s easy to see why. With the three largest ETF issuers controlling 83 percent of the assets, others must go above and beyond to stand out. That means pioneering higher IQ products, like smart-beta, which shun traditional indexes in favor of weighting by other factors. It also means innovating wherever possible, setting an attractive price, coming up with a memorable ticker -- and now, getting backing from an array of big thinkers.

Factors -- as the finance industry calls the dizzying array of theories about why the price of stocks or bonds moves -- are used to direct more than $700 billion, or 20 percent, of the U.S. ETF market, data compiled by Bloomberg show. Encompassing themes like value, growth, momentum and quality, many of these strategies were hothoused within universities, yielding research and publicity.

That academic rigor has proved popular with investors and issuers alike. While investors have been won over by the promise of better returns than plain-vanilla ETFs that are linked to a simple index, issuers can justify charging more for these products due to their additional complexity.

But with so many funds to choose from, the divergent methodologies supporting them have come into question. One value fund may look at a stock’s price-to-earnings ratio, for example, but those earnings could be calculated on a forward, trailing or operating basis. Or, a fund could ignore earnings entirely and look at the ratio of price-to-sales, dividends or book value, says CLS’s Vanneman.

It’s not that one method is better or worse. But based on the precise formulas, the outcomes should differ.

“You have to decide that you know an aspect of financial markets in order to be able to pick between the various solutions because they are so nuanced,” said Sam Fraundorf, the Atlanta-based chief investment officer at Diversified Trust Co., which oversees $6.5 billion. “I’m not sure that all this proliferation is in any way, shape or form designed to enhance a true investment experience.”

Enter the experts. Combining academic research with the front-line experience of issuers can help produce better ETFs, according to Mo Haghbin, head of product at OppenheimerFunds’s beta solutions business.

That’s why it’s recruited two academics from Harvard Business School and one from the London School of Economics to a new advisory board. The trio also weighs in during weekly strategy calls on topics such as how to construct multi-factor funds that focus on emerging markets, or the investment rationale behind thematic products, like artificial intelligence, Haghbin said.

Similarly, Campbell Harvey, who teaches at Duke, joined Research Affiliates in October as a partner and senior adviser. Going one further, Joel Shulman, who teaches entrepreneurship at Babson College outside Boston, has started his own ETF under the EntrepreneurShares brand.

“With what’s happening in smart beta and all of these different strategies coming to market that may or may not have merit, it’s really important that sponsors take the time to do this research,” Oppenheimer’s Haghbin said. “The next big innovation in smart beta could be something that was researched 10 to 20 years ago that hasn’t made it into the mainstream yet, so we want to continually have this dialogue and feedback loop.”

Of course, academia has long informed asset management, and vice versa. Nobel laureate and Yale professor Robert Shiller teamed up with Barclays Plc to start an exchange-traded note back in 2012; Wharton’s Jeremy Siegel was instrumental in getting WisdomTree Investments Inc. off the ground a decade ago; while Burton Malkiel -- who wrote ‘‘A Random Walk Down Wall Street” -- is on several fund indexing committees and serves as chief investment officer for Wealthfront Inc., an ETF-focused online financial adviser.

Some of the largest players also employ their own academics to gain an edge. BlackRock Inc., the world’s largest ETF issuer, hired Andrew Ang from Columbia Business School back in 2015 to lead its factor-based strategies team, and partnered with MSCI Inc. to re-imagine how advisers think about factors. MSCI, meanwhile, relies on its own Ph.D.s to develop the measures that will work for both ETF issuers and investors.

All that big-name firepower matters. Having Ang on board has helped BlackRock “enormously,” said Rob Nestor, head of iShares smart beta, noting that Ang’s relationship with some of the world’s largest pension funds has encouraged greater collaboration with them. For MSCI, research is also a core selling point that differentiates the firm from its rivals, according to Raman Aylur Subramanian, who heads equity applied research for the Americas at the indexer.

But all that knowledge and expertise has to amount to more than window-dressing, cautions Duke’s Cam Harvey. He’s found more than 200 phony factors documented in academic literature.

“Just because you have an academic affiliated with you, that’s just not enough,” he said. “You want the academic to be doing something that will ultimately benefit the investor and the firm. If you add value for the investor, you will benefit the firm.”