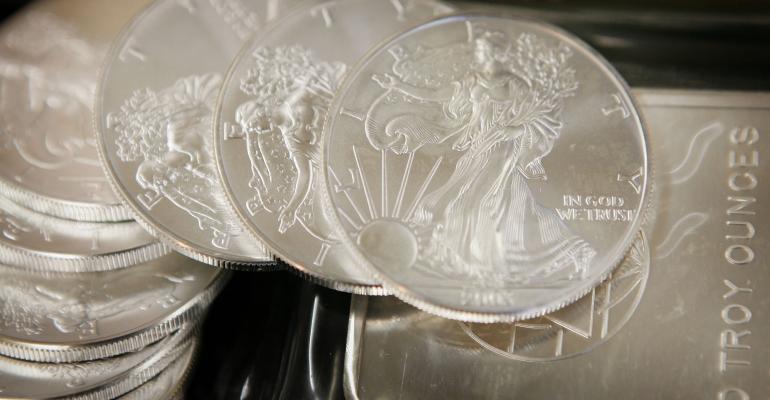 (Bloomberg) --Silver, known for being a market of extremes, is living up to its reputation this year.

Prices rallied 17 percent in the first four months of the year, only to reverse and wipe out those gains. Despite the selloff, investors are pouring money into exchange-traded funds, and assets have reached a record 21,211 metric tons, valuing the holdings at $11 billion. At the same time, the picture is bearish in the futures market, where hedge funds now hold the first net-short position in two years.

Different kinds of investors are driving the opposing trends, according to George Coles, an analyst at research firm Metals Focus Ltd. Large, active hedge funds shorted Comex futures because of the risk of higher U.S. interest rates, driving silver prices lower, he said. ETF buyers tend to be smaller traders that use silver for long-term diversification of their portfolios. They’ll be rewarded for their bullishness as slower U.S. economic growth spurs demand for haven assets, Coles said. This may be a case of the smaller investors versus the big guys,” Coles said in a phone interview from London. “In this case, the smaller guys may be right.”

He’s predicting that silver prices have probably bottomed and will rebound from current levels. Prices will reach $20.25 an ounce in the next 12 months, an increase of 25 percent from the current value of $16.164.

U.S. economic growth won’t be as robust as some people think, and that’ll likely lead to a slower-than-expected increase in interest rates, Coles said, which would benefit precious metals. Short covering by Comex speculators could also help fuel the rally, he added.

Federal Reserve Chair Janet Yellen’s testimony to Congress last week dimmed hopes for another rate hike this year and an index of U.S. economic surprises sits near the most negative level since May 2016. Precious metals tend to do well in low-rate environments because they don’t pay interest.

Silver prices have suffered since April as investors bet that central banks are preparing to tighten monetary policy. Silver is down 12 percent in the past three months, the biggest drop among metals in the Bloomberg Commodity Index. Gold declined 4 percent.

The recent losses are overdone, according to David Govett, head of precious metals trading at Marex Spectron Group Ltd. in London, adding that he would “be a buyer on dips.”

“Silver always overreacts, so when you have large moves, it goes far further than gold,” he said.

There’s plenty of speculation that silver is due for a recovery. In a Bloomberg survey of 13 traders and analysts, the majority were bullish.

Assets in exchange-trade funds backed by silver have risen 6.6 percent since April 24 to 21,211 tons, according to data compiled by Bloomberg.

In the same time, hedge funds turned negative as prices tumbled. In the week ended July 11, hedge funds were net short by 5,402 contracts, according to U.S. Commodity Futures Trading Commission data. Short positions have tripled since the week of April 25 to 60,775 contracts.

Silver tends to outperform gold when there’s a rush in haven demand, making the metal more attractive for investors looking to hedge against surprise events, according to John Butler, head of wealth services for Toronto-based GoldMoney Inc., which manages a platform for investing in precious metals.

“Silver is a coiled spring ready to bounce,” Butler said by phone. “The Fed is getting ready to blink on rates, and that should be positive for all the precious metals, but especially for silver.”