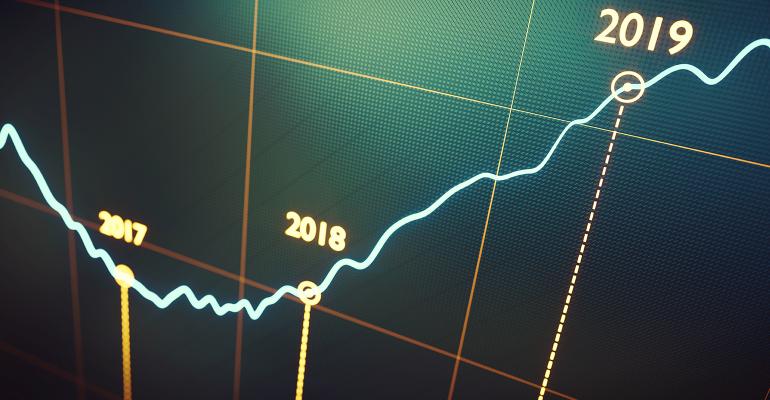 Recapping 2019 ETF Demand From the Top Down

A look at which ETFs and index providers are behind the strong growth in 2019.

Despite a recent recovery in stock-focused ETF demand, record flows for bond products have easily been the biggest story of the year. Meanwhile, although the top-two ETF providers, iShares and Vanguard, continued to dominate, smaller providers with deep pockets have emerged. Lastly, not all index providers behind stock-based ETFs have seen the same investor interest.

In November, investors poured $44 billion of net inflows into exchange traded products, pushing overall year-to-date flows to $267 billion, according to First Bridge data. Stock-based funds gathered $34 billion, much higher than the $9.4 billion that flowed into bond funds during the second-to-last month of the year. However, the $133 billion that flowed into bond funds in the first 11 months of 2019 puts that asset category on pace to exceed stock funds flows (which have clocked in so far at $117 billion) for the first time since the financial crisis—although the gap has narrowed recently. 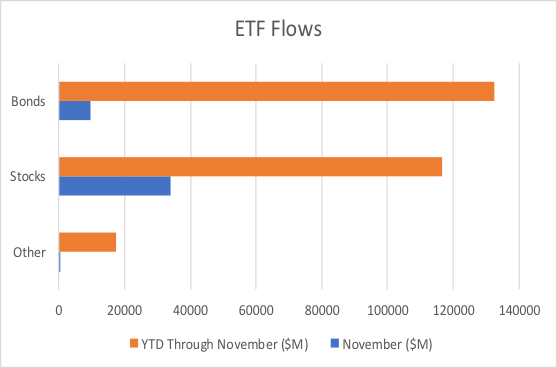 In fact, half of the top-10 funds with largest inflows so far this year have been in bond funds, led by Vanguard Total International Bond Index ETF (BNDX) and Vanguard Total Bond Market Index ETF (BND). CFRA’s view on BND is more favorable given the stronger relative risk/reward when we review ETF daily holdings and higher liquidity. Both ETFs have low expense ratios.

Vanguard gathered $91 billion of net inflows thus far in 2019, and its market share of 34% was second only to iShares, which is owned by BlackRock, which pulled in $98 billion of new money (for a 37% market share). The inflows gap between these two firms and the next largest—Charles Schwab, which pulled in $21 billion—remains wide. Indeed, iShares and Vanguard are the sponsors behind the 14 exchange traded products with the most inflows in 2019. SPDR Gold (GLD) is the fund with the highest flows from any other firm. 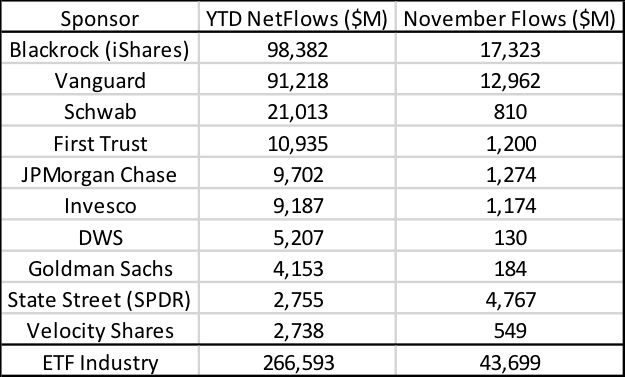 However, smaller ETF providers JPMorgan Chase and Goldman Sachs have also had an impressive year, bringing in the fifth- and eighth-most net inflows, respectively, ahead of larger providers State Street and WisdomTree. Goldman Sachs ActiveBeta US Large Cap Equity (GSLC) and JPMorgan Ultra-Short Income (JPST) were among the 40 products with the highest net inflows in 2019.

Aided by Vanguard's BNDX and BND inflows, as well as iShares MBS (MBB), ETFs tied to Bloomberg indexes gathered $62 billion of net inflows thus far in 2019, the most among the index firms. It is less common with bond funds to promote the index provider in the name than it is with equity managers. iShares Core S&P 500 ETF (IVV) or iShares Edge MSCI Min Vol USA ETF (USMV) products are obviously connected to S&P Dow Jones Indices, which underpinned funds with $42 billion of 2019 net inflows, and MSCI indexes, which brought in $30 billion in funds so far in 2019. 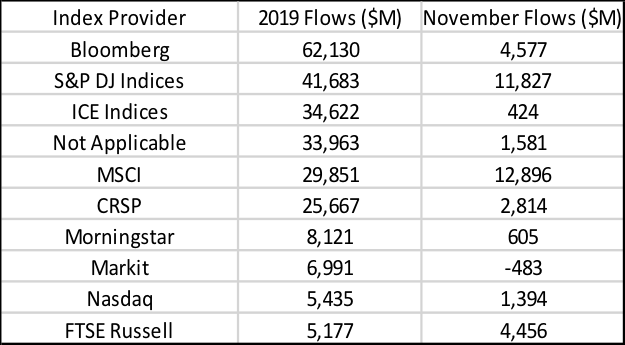 Less known as an index provider than a research firm that rates funds, Morningstar-based products, such as JPMorgan BetaBuilders Canada (BBCA), collectively gathered $8.1 billion of net new money in the first 11 months of 2019.