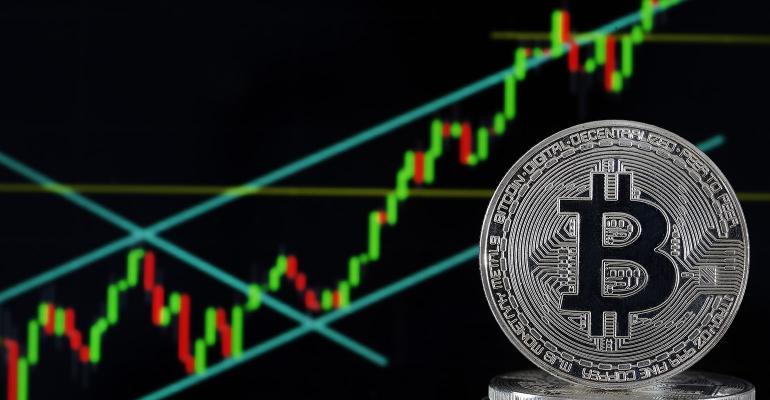 The explosive debut of the Purpose Bitcoin ETF (BTCC) happened in Canada, known for being out front in ETF product development.

(Bloomberg) -- The roaring success of the first-ever Bitcoin exchange-traded fund will have been no surprise to cryptocurrency fans. But if they don’t know about ETFs, the venue might have been startling.

The explosive debut of the Purpose Bitcoin ETF (ticker BTCC), whose trading volume approached $400 million worth of shares in two days, didn’t happen in the largest ETF market. Nor was it in Europe, where similar exchange-traded products have already garnered about $6.5 billion in assets, according to data compiled by Bloomberg.

It was actually in Canada -- where the equity market is just 8% of the size of the U.S. and assets in ETFs total about $215 billion -- less than the SPDR S&P 500 ETF Trust (SPY) on its own. It doesn’t register much beyond the ETF industry, but Canada has quietly built a reputation for this kind of coup.

“Canada has long been out in front with respect to ETF product development,” said Ben Johnson, Morningstar Inc.’s global director of ETF research. “From listing the first-ever ETF to more recently becoming home to the first-ever psychedelics ETF.”

BTCC launched on the Toronto Stock Exchange on Thursday, the first fund of its kind in North America and the first anywhere to carry the ETF label. A day later, Evolve Fund Group’s Bitcoin ETF (EBIT) debuted, but with a less impressive trading volume of about $14.5 million worth of shares.

As with many areas of innovation, deciding who or what was first in the financial world can come down to definition, but most agree that the Toronto 35 Index Participation fund, or TIPs, was the first iteration of a modern ETF in 1990. While it hasn’t enjoyed the astronomical growth of the U.S. industry -- which kicked off with SPY’s launch in 1993 -- Canada’s ETF market has frequently introduced products not tried anywhere else.

The reason comes down to a more nimble and liberal regulatory environment and a focus on innovation. The Evolve fund, for example, was approved less than a month after an application was initially filed.

“Canada has proven that it has a process that leads to innovation and the systems to allow for it,” said Som Seif, chief executive officer of Purpose Investments.

In the U.S., the Securities and Exchange Commission has rejected multiple applications for a Bitcoin ETF, citing concerns that prices can be manipulated and liquidity is insufficient. That has left investors plowing cash into the Grayscale Bitcoin Trust (GBTC), a riskier and more costly structure that often trades at huge premiums to the value of its underlying assets.

None of this is to say the ultra-rich, highly liquid U.S. market doesn’t innovate. The first of a new ETF format that hides its holdings against front-funning -- called active non-transparent funds -- debuted in the U.S. in April 2020.

“Canada has been ahead of us in certain instances, but there are instances where the U.S. is ahead,” said Ben Slavin, head of ETFs for BNY Mellon Asset Servicing. “I wouldn’t necessarily generalize the U.S. is always behind, it’s just Bitcoin is an incredibly hot topic and it might be a special case.”

Meanwhile, there are plenty of industry watchers who would argue Canada isn’t truly first to the Bitcoin ETF. In Europe, several ETPs exist that behave in almost exactly the same way, the biggest of which has been trading for more than five years. Regulatory differences just result in a different label.

While other markets have outpaced the U.S. in innovation, none can compete with the size and scale of the American market when it does finally enter the fray.

Canada may have launched the first-ever ETF, but the market in the U.S. is now about 27 times bigger. There is around $70 billion in Canadian bond ETFs -- south of the border it’s $1.1 trillion and counting.

If and when a Bitcoin ETF finally arrives in the U.S., growth could be explosive. The closest alternative, the Grayscale Bitcoin Trust, has about $34 billion in assets. Investors are even willing to pay 7.5% premium currently to get in, and its average premium in its lifetime is 37%.

That’s yet another reason to approve an ETF, according to proponents.

“It boggles my mind we still don’t have a Bitcoin ETF in the U.S.,” said Geraci at the ETF Store. “It’s understandable that there can be a difficult balance between embracing innovation and ensuring proper investor protections. However, given the existing Bitcoin products available to U.S. investors, a Bitcoin ETF would seem to strike that balance.”