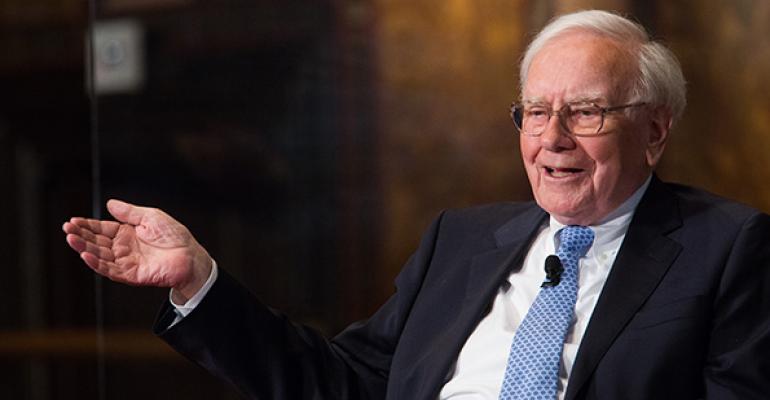 Put Buffett's Advice Into Action With These Two ETFs

(Bloomberg) -- Warren Buffett's advice may now extend beyond the grave.

When the Oracle of Omaha went out of his way to trash hedge funds and endorse low-cost index funds, it wasn’t just a case of "do as I say, not as I do." He had already laid out plans to allocate his personal fortune this way. Here's what Buffett wrote about his last will and testament in a letter to shareholders about 2013 results (pdf):

“My advice to the trustee could not be more simple. Put 10% of the cash in short‐term government bonds and 90% in a very low‐cost S&P 500 index fund. I believe the trust’s long-term results from this policy will be superior to those attained by most investors—whether pension funds, institutions, individuals—who employ high fee managers.”

While there is no exchange-traded fund that does this per se, investors might easily put Buffett's advice into practice with a mini-ETF portfolio--let's call it the "Buffett Special." Simply allocate 90 percent of your money to the Vanguard S&P 500 ETF (VOO) and 10 percent to the iShares 1-3 Year Treasury Bond ETF (SHY).

The Buffett Special portfolio comes with a near invisible blended fee of 0.06 percent, which is only 1/12th the asset-weighted average for active mutual funds. It's less than 1/30th of the typical 2 percent charged by a hedge fund (and that isn't counting performance fees, which are usually 20 percent on any profit).

And what about the returns?

The Buffett Special has a 10-year annualized return of about 7.5 percent through the end of June 2015. That's better than the average endowment return of 6.3 percent through the same time period, according to the National Association of College & University Business Officers. It also bests the average pension return of 6 percent, according to the Wilshire Trust Universe Comparison Service. So Buffett's not kidding when he says this miniportfolio will beat even the most sophisticated institutions. It's not entirely a fair comparison, though, because some of these big players have very different goals, and mandates, than individual investors. Still, many of them take a long and expensive route, guided by active managers and consultants, to get to the same place they'd arrive at if they just listened to Warren.

The Buffett Special easily bests the average hedge fund return, as well. Below is a chart of VOO’s index, SHY, and the Hedge Fund Research HFRI Fund Weighted Composite Index. (VOO itself isn’t 10 years old, so the chart shows its underlying index.)

To be sure, most hedge funds aren't trying to beat the S&P 500. Instead, they're trying to provide a noncorrelated, risk-adjusted return stream. Regardless, they've struggled lately, and Buffett was really dinging them at the annual shareholders meeting this weekend for their high fees.As for the recommendation of 90 percent in a stock index fund, that might sound risky to some—but it shouldn't, Buffett says. Fear of price volatility can lead investors to do very risky things, such as taking money out of stocks and leaving it in cash after 2008, Buffett wrote in his shareholder letter about 2014 results:

If not for their fear of meaningless price volatility, these investors could have assured themselves of a good income for life by simply buying a very low-cost index fund whose dividends would trend upward over the years and whose principal would grow as well (with many ups and downs, to be sure).

It's hardly a sexy strategy. But as any Buffett follower knows, often the "boring" businesses produce the best results.