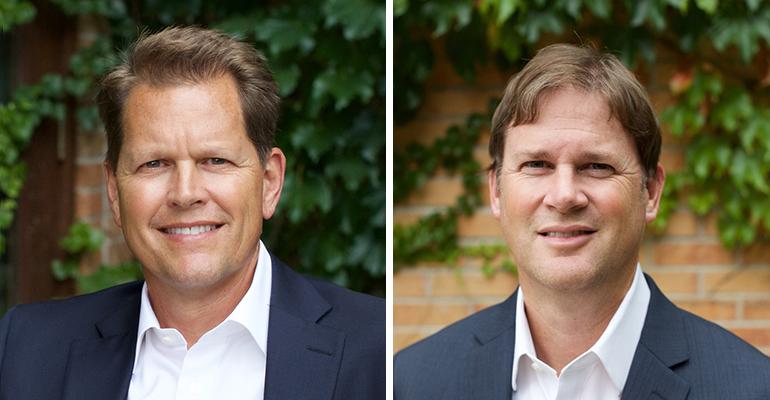 Bruce Bond and John Southard are returning to the ETF industry with a focus on defined outcome strategies.

Some say there is no more room for meaningful innovation in exchange traded funds. PowerShares Co-founders Bruce Bond and John Southard disagree.

The duo founded PowerShares in 2003, and were among the first to introduce smart beta, factor-based ETFs through their Intellidex products in May 2003, including the popular Nasdaq-based QQQ fund, which holds close to $60 billion in assets. They also came out with the first “ETF of ETFs,” some of the first commodity ETFs (with Deutsche Bank) and the first actively traded ETF. They sold PowerShares to Invesco in 2006.

“At the time, we really drove a lot of the things that today are in the market, and some of the bigger performers in the market were ideas and concepts which we introduced well over 10 years ago,” Bond said.

Now the duo have gone out on their own again with their purchase of Innovator Capital Management, a Wheaton, Ill.-based money manager. The two say they see a new opportunity to innovate in the ETF space again with a kind of category of investing, particularly through their Defined Outcome Series, currently in registration with the Securities and Exchange Commission.

“If you think about it, we do things to protect our investment in our house, in our cars, even our lives are insured,” Bond said. “With the things that have value within our lives—our assets—we protect those things, and we’re very careful about exposing those to catastrophic loss. But we don’t really do that with our portfolio.”

Bond and Southard have recently filed four actively managed ETFs with the SEC, aimed at providing a downside buffer to investors’ portfolios. This type of strategy has traditionally been available either as a structured product for wealthy clients or via fixed-index annuities, both of which Bond says are expensive. They’re hoping to get approval and launch the strategies in early January.

The Innovator S&P 500 Ultra ETF seeks to provide returns that, over a period of about a year,  exceed the S&P 500 Index up to a pre-determined cap, with no downside buffer. It would primarily invest in Flexible Exchange Options, a customizable options contract in indexes that is still exchange traded, and cleared through the Options Clearing Corporation. They will also invest in U.S. Treasurys and other cash equivalents, according to the prospectus.

“Our most protected product that we’re looking to introduce will protect people from -5 to -35 percent,” Bond said. “So even if we had another ’08 when the market really crashed, we have a significant level of protection.”

To be sure, these strategies are new, and mutual funds that have attempted similar strategies in managing futures contracts to provide downside protection in the broader markets have met various levels of success, though have yet to get a chance to prove their mettle in the current long-standing bull market.

Through the previous owners, Innovator had an existing relationship with Investor’s Business Daily and launched the Innovator IBD 50 ETF in 2015, which tracks the high conviction list of top-ranked growth companies comprising the IBD 50 Index. Year-to-date as of Nov. 30, that fund, FFTY, has returned just over 39 percent, beating the S&P 500 total return by 19 percentage points, according to Morningstar data.

On Dec. 13, Innovator is introducing the Innovator IBD ETF Leaders ETF, an issuer-agnostic ETF of ETFs.

“We’re utilizing the time-tested IBD research to evaluate the ETF marketplace, to identify the ETFs within the market that, occurring to IBD, have the greatest opportunity for growth in the future, selecting those regardless of who their sponsors are,” Bond said.

Bond was attracted to the company’s relationship with Investor’s Business Daily, given the publication’s visibility.

“One of the struggles today in the ETF space is gaining visibility, and trying to stand out from the crowd and having a platform to do that from—especially for new entrants into the industry. Investor’s Business Daily gives us somewhat of a platform because they’re well-known, and people follow them, have been following them for years, to get our message out, to talk about what we’re doing, how we’re trying to bring value in the Investor’s Business Daily products.”