Is Palladium a Better Deal Than Gold, Silver?

The feedback on our Jan. 2 piece about precious metals was predictable. Some folks thought we were somehow impugning gold when we suggested covered call writes on a silver junior miner ETF. Others thought an option position was just too complicated or risky.

Look, we just calls ’em as we sees ’em. Silver simply has had more “oomph” than gold recently. And miners more than metal itself. But, we get it. Lots of investors are chary of taking on more equity risk through mining stocks. Better, they reason, to have outright positions backed by physical metal.

These folk should love palladium, a platinum group metal that, due to its scarcity, has made it the most valuable of the four major precious metals. Palladium is a key component in automotive pollution-control devices.

Over the previous 12 months, palladium’s had much more oomphiness than gold or silver. The Aberdeen Standard Physical Palladium Shares ETF (NYSE Arca: PALL), which tracks the metal’s spot price using bullion held in London and Zurich vaults, is up nearly 55%. The SPDR Gold Shares ETF (NYSE Arca: GLD), meantime, gained just 22%. And silver? The iShares Silver Trust (NYSE Arca: SLV) has barely picked up 17% in the past year.[i] 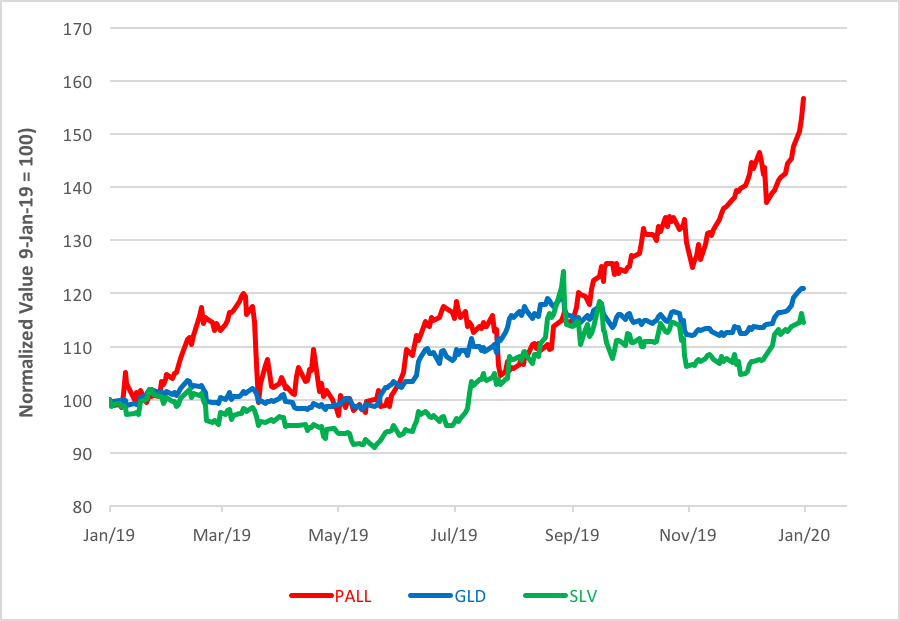 Past oomphiness is no guarantee of future outperformance, but PALL’s just made a breakout move signaling room for yet more upside. More than 23% on the upside.

PALL shares aren’t cheap. At $199 a copy, it’s a good thing investors can buy odd lots. Still, the ETF shares are much cheaper than the metal itself. At last look, an ounce of palladium changed hands at more than $2,060.

Holding an interest in palladium is a volatile undertaking. PALL’s standard deviation over the past 12 months is 26%, twice the variability of GLD. Palladium’s capricious nature caused PALL to suffer a 14.5% drawdown between March and May 2019. It took the ETF until September to recover its lost ground. By comparison, GLD’s big drawdown measured just 4.1% last year.

An investor who’s not put off by the white metal’s volatility and looks to use PALL as a portfolio replacement for a gold ETF should heed the ETF’s equity correlations. Over the past five years, GLD’s been more “yin” to the stock market’s “yang” than PALL. GLD earns a -0.19 coefficient while PALL cranks at a 0.35 level. As the S&P goes, so goes palladium. To an extent anyway.

Which brings us, oddly, full circle. Investors who didn’t want to put stock (pun intended) into a miners-based strategy but are willing to hold PALL shares aren’t really getting away from equity risk. Considering the delta for the silver miner buy-write suggested in the Jan. 2 column, the equity risk differential could be negligible. The percentage gain potential, too, for both strategies is nearly equal.

What’s not equal is the relative cost. PALL shares are pricey; shares of the ETFMG Prime Junior Silver Miners ETF (NYSE Arca: SILJ) not so much. Very not so much, in fact. SILJ can be bought for little more than $11. That’s further cheapened by the receipt of call premium.

[i] We’re only considering open-ended exchange traded funds here. There is a closed-end fund, the Sprott Physical Platinum and Palladium Trust (NYSE: SPPP), that appreciated more than 51% in the past 12 months.