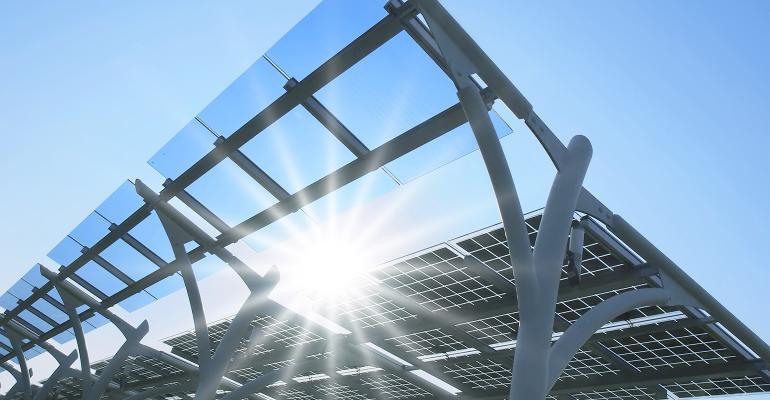 The One Way to Avoid Greenwashing in ESG Investing

It’s not very profitable right now, but that may soon change.

(Bloomberg) -- As criticism of the efficacy of ESG investing mounts over its acute susceptibility to greenwashing, one category has remained largely immune to calls for stricter regulation: clean-energy funds.

While the sector tied to wind and solar is perceived as reasonably safe when it comes to actually making a difference with your money, the bad news is that it’s been getting mostly pounded since early 2021.

But those fortunes may be changing. This week, the sector’s stocks received a boost when US President Joe Biden used his executive power to boost domestic solar manufacturing. Biden’s plan includes invoking emergency authority to impose a two-year ban on new tariffs for panels imported from four Southeast Asia nations, in turn neutralizing the threat of retroactive duties which had all but frozen new US solar projects. He also used sweeping powers under the Defense Production Act to support domestic solar firms as well as other US clean-energy industries.

Industry executives however criticized the gift horse, saying it didn’t go far enough. Still, solar stocks including Sunrun Inc. and Sunnova Energy International Inc. rose Monday and Tuesday. The rally was constrained though. On Tuesday, the Solar Energy Industries Association said a trade dispute was responsible for US solar installations plunging 52% in the first quarter, the lowest level in two years.

The bottom line is that renewable energy companies have lost about 25% of their value since the start of last year. The industry has been vulnerable to rising interest rates and a business environment plagued by shortages of commodities required to make solar panels.

Biden’s orders may be the start of a turnaround in quarters to come, but what should investors do right now?

BlackRock Inc.’s $5.1 billion iShares Global Clean Energy ETF (ticker ICLN) is a benchmark of sorts for the industry. The exchange-traded fund’s stock price peaked above $33 in January 2021, and then tumbled to less than $18 at its low point last month. The shares closed Tuesday at $20.87.

But it’s just one of dozens of ETFs in the US that concentrate investments in clean energy. A data provider called Util has put together a report that may help investors find the most climate friendly of funds. The firm uses machine-learning models to pinpoint companies within the parameters of the United Nations’ 17 Sustainable Development Goals (SDGs).

The three ETFs that scored the highest in the Util review were Global X Hydrogen (ticker HYDR), Fidelity Clean Energy (FRNW) and Invesco Solar (TAN). The Global X and Fidelity funds hold shares of companies that have about 50% of their revenue positively aligned with SDG 13, according to Patrick Wood Uribe, Util’s chief executive officer.

“Our analysis looks solely at the risks that a business poses to the society and environment in which operates, in absolute terms,” Wood Uribe said.

As for the worst performers, Util’s research pegged three utilities ETFs as the lowest scoring, based on a review of the funds’ holdings relative to SDG 13. Most utilities burn fossil fuels to generate electricity, and even those that are attempting a green transition still get the majority of their revenue from traditional power generation, Wood Uribe said.

The three funds are Invesco S&P 500 Equal Weight Utilities (RYU), John Hancock Multifactor Utilities (JHMU) and ProShares Ultra Utilities (UPW). Not one of them had more than 5% of their funds’ assets aligned positively with SDG 13, Util said.