/sites/all/themes/penton_subtheme_wealthmanagement/images/logos/footer.png
Recent
Recent
Looking Back at Amazon’s Very Big Year in Commercial Real Estate
Jan 25, 2022
Nine Must Reads for the CRE Industry Today (Jan. 26, 2022)
Jan 25, 2022
WeWork Buys Coworking Startup in First Acquisition Since Neumann
Jan 25, 2022
London Gets Back to the Office, But Bankers Drag Their Heels
Jan 24, 2022
Featured
The 10 Best and 10 Worst States in Which to Retire in 2021
Jul 15, 2021
Poll: 15 Classic Books on Investing and the Markets
Apr 03, 2020
25 U.S. Markets Adding the Most Multifamily Units This Year
Feb 03, 2021
Fifteen Must-Listen Business Podcasts for Advisors
Aug 14, 2020
Informa Intelligence
brought to you by 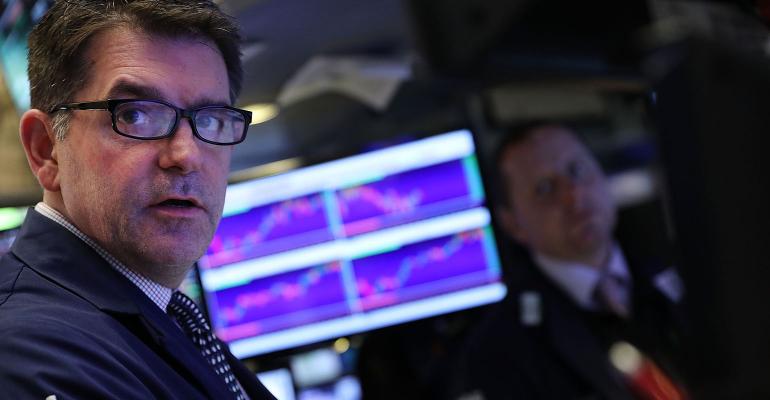 Is Now The Time For Active Management?

An over-extended bull run in equities has many suggesting it’s becoming a “stock picker’s market.” Does the data support the argument?

I’ve been thinking a lot recently about whether actively managed funds can beat the market.

The question is top of mind because the bull market is long in the tooth. Even die-hard ETF and index fans have been asking me lately if now is the time for active management.

The idea blew up on social media earlier this week when DoubleLine Capital CEO Jeffrey Gundlach told investors to take index funds and “throw them out the window,” singling out the S&P 500 as primed for underperformance. The meme, however, has been there all year:

Argument No. 1: Active Funds Do Well In A Bear Market

The first argument people make is that active funds do better than index funds in bear markets. On a practical basis, this argument is silly — if you knew we were entering a bear market, you would sell out of your equity positions entirely, not rotate into active funds. Nonetheless the argument persists, as it sounds plausible for two reasons.

First, active managers have the ability to tilt their portfolios toward defensive stocks, or to move into cash during bear markets, whereas index funds generally must stay fully invested. Why drive off a cliff if you see it coming?

Secondly, most active funds keep a 3-5 percent cash cushion on their balance sheets, effectively reducing their beta to the market.

The intuitive appeal of this argument, unfortunately, is undermined by the data. The Standard and Poor’s Index vs. Active (SPIVA) report looks at the percentage of actively managed funds that outperform the market. As you might expect, active funds tend to trail the market: in fact, a majority of large-cap U.S. Equity funds have trailed the S&P 500 Index in 13 of the past 16 years. Importantly, there’s no evidence that down years help — the majority of active funds trailed in all three down years for the market.

A slightly different form of the argument above holds that “we are entering a stock picker’s market.” By this, people usually mean that the correlation between stocks in the S&P 500 is down, which is definitively true over the past six months.

Like the bear market argument, it’s easy to see the appeal of this idea. Take two automakers: Ford and GM. For the year ending May 11, 2017, GM’s stock surged 14 percent while Ford plunged by a similar amount. This 28 percent spread created a perfect stock picker’s market for car companies. If you did your homework and concluded that GM was better positioned than Ford, you crushed it.

Rewind one year and look at the period ending May 11, 2016 — the two companies moved in lockstep, ending the year less than 1 percent apart. Do all the research you want; it wouldn’t have mattered.

It’s easy to see why active managers would prefer the first market over the second one. Why even bother with market No. 2?

Sadly, this argument falls apart under even the lightest scrutiny.

The problem starts with the idea of correlation. Correlation is simply whether two stocks move in the same direction: If stock A goes up 1 percent and stock B goes up 100 percent, they’re perfectly correlated. Obviously, however, a 99 percent difference in return creates plenty of opportunity for skilled active managers to prove their worth. That’s dispersion, and dispersion is what active managers should really be concerned about.

Fortunately, there’s almost always plenty of dispersion. As one Vanguard study pointed out, in every year between 2007 and 2011, roughly two-thirds of the stocks in the Russell 1000 index returned more than 10 percent above or below the index. Unfortunately, a strong majority of active managers trailed the market over that five-year stretch.

Argument No. 3: The U.S. Is Overvalued

While Argument No. 1 and No. 2 are not particularly appealing on examination, Argument No. 3 — the core of Jeffrey Gundlach’s argument — is more interesting.

In his interview, Gundlach pointed out that the U.S. market represents more than 50 percent of global market cap, but just 25 percent of global GDP, and that U.S. stocks are priced substantially higher than emerging market stocks using any valuation measure you care to use.

This is objectively true. The iShares Core MSCI Emerging Markets ETF (IEMG) trades at a P/E ratio of 16 compared to 24 for the S&P 500, according to FactSet.  This discrepancy exists despite the fact that emerging markets are growing faster. Gundlach’s recommendation: Short the S&P 500 and buy emerging markets.

Even Gundlach’s argument, however, isn’t a cincher: Studies of tactical asset allocation funds show that very, very few of them have beaten a simple 60/40 balanced portfolio over time. Gundlach may be an outlier — that rare bird that can identify bubbles before they burst — but the odds aren’t in favor of the average tactical manager beating the market.

I understand why these arguments pop up when the markets get stretched. The inherent flexibility of active management gives it the opportunity to sidestep market pullbacks, which sounds great, and I’m sure some managers do. The data, unfortunately, suggests that most managers will fail and that it’s extraordinarily hard to pick in advance the ones that won’t.

Matt Hougan is CEO of Inside ETFs, the world's leading ETF conference and webinar company, and managing director of global finance for Informa PLC.

Matt Hougan is a keynote speaker at the upcoming Inside Smart Beta conference, taking place June 8-9 in New York City. View the agenda and register here.