/sites/all/themes/penton_subtheme_wealthmanagement/images/logos/footer.png
Recent
Recent
New Research: Investing in Seniors Housing Properties—Opportunities and Challenges
Jul 01, 2022
12 Must Reads for the CRE Industry Today (July 1, 2022)
Jun 30, 2022
Reinventing the Advisor Workstation for a Digitized World
Jun 30, 2022
Can the U.S. Supply Chain Withstand New Disruptions?
Jun 30, 2022
Featured
The 10 Best and 10 Worst States in Which to Retire in 2021
Jul 15, 2021
Poll: 15 Classic Books on Investing and the Markets
Apr 03, 2020
Fifteen Must-Listen Business Podcasts for Advisors
Aug 14, 2020
Celebrity Estates: Jay Leno and Planning for Classic Car Collections
Feb 22, 2022
Inside ETFs Conference
brought to you by 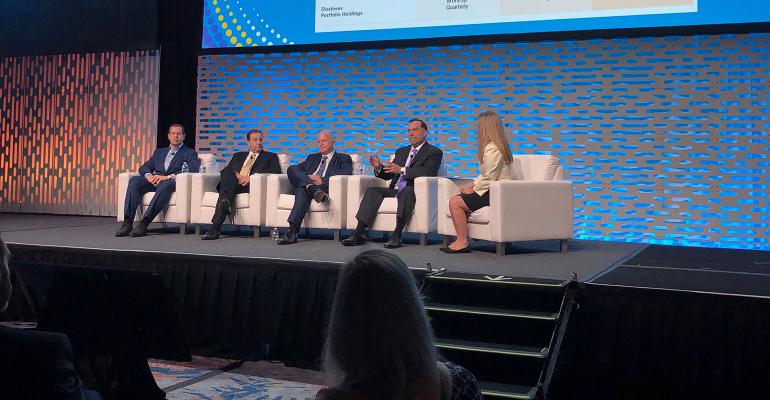 Once asset managers can convert traditional mutual funds into ETFs, that will change the market for mutual funds, according to panelists at Inside ETFs. But one speaker says it won't be the end of mutual funds.

There’s a growing interest among asset managers to convert their existing open-end mutual funds into exchange traded funds, especially with the rise of nontransparent active structures. Some of the creators of those new structures, speaking at the Inside ETFs conference, said smart attorneys are working on helping managers do just that. Once they overcome the legal and operational challenges, those conversions could greatly accelerate the growth of nontransparent active ETFs, they argued.

Douglas Yones, head of exchange traded products at the NYSE, said the exchange is working hard at converting traditional open-end funds into ETFs, bringing the assets, track record and performance along with them.

“When that happens, the change that will occur in the markets is pretty tremendous,” he said.

NYSE has created the technology and patented one model of nontransparent active ETFs, which it will license to asset managers.

Yones believes the structure will see fast growth, pointing to the existing rise of active ETFs. Advisors, he argues, want to use active alongside passive in the same structure, and more advisors use ETFs only. But the issue will be how will these products sit side by side on a platform with mutual funds. From an access and distribution standpoint, ETFs will win out.

But Terry Norman, founder of Blue Tractor Group, which has also commercialized a nontransparent active structure, said there are still logistical issues that must be overcome to convert funds to ETFs. For one, each shareholder will need a brokerage account.

“What if they don’t want to set a brokerage account up? Are they going to be ejected from the fund?” he asked.

These type of issues can be overcome, and, “There are a lot of law firms looking at that,” said Daniel McCabe, CEO, Precidian Investments, which also licenses a nontransparent structure. “Head-to-head over time, the ETF is going to be more efficient; it’s going to win.”

The current generation wants access to information in real time, so the natural movement over time will be toward an exchange-based model, McCabe said.

But Greg Friedman, head of ETF management and strategy at Fidelity, took the contrarian view, arguing that this doesn’t mean the death of the mutual fund. A successful portfolio should have both passive and active management. A mutual fund works better in certain places.

“I think we got to be careful that everything’s going to jump from a mutual fund to an ETF; I think there are some places that’s not wise,” he said.

“There is a place for mutual funds. It’s not either/or. It’s both.”