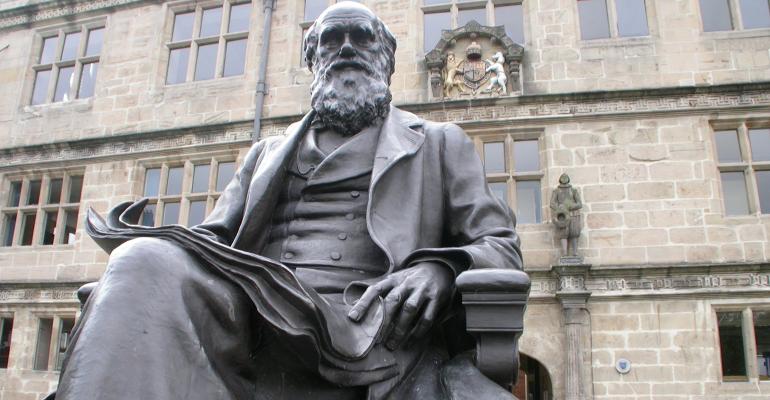 Financial Darwinism, though, is beginning to work its evolutionary magic.

(Bloomberg Gadfly) --Do low-cost index-tracking funds really threaten to turn us all into communists?

The giant sucking sound in the fund management industry in recent years is the noise of money flowing to passive products. The rise of exchange-traded funds has been relentless, and shows no signs of slowing. If anything, the shift to passive strategies is accelerating, as this chart based on data compiled by Bloomberg Intelligence's Eric Balchunas shows. It's not just the U.S. that's seeing a revolution. European ETFs are on track for their biggest percentage gain in a decade. Investor enthusiasm for low-cost ETFs presents a clear and present danger to the active crowd. A report published earlier this year by Morgan Stanley and Oliver Wyman suggested the asset management industry could suffer a 30 percent drop in revenue by 2019 if fees continue to slide and market returns falter.

The uncharitable view of such alarmism from Sanford, a research and brokerage firm, and the billionaire founder of Elliot Management Corp. is that that they're just trying to ring-fence their own lucrative businesses against encroachment by the low-fee gang. Who needs expensive fundamental company research or high-cost hedge-fund expertise when your money can earn just as much of a return tracking an index?

A more charitable view of the anti-passive movement is that it's pointing out a genuine problem. If money gets invested in companies regardless of whether they are well run, or using their capital sensibly, or safeguarding the environment, then some element of the capitalist system is undermined.

Financial Darwinism, though, is beginning to work its evolutionary magic, both on the perceived overcharging by the active crowd and on the thorny stewardship issue.

Hedge funds have had to reduce their charges in response to the changing environment. Man Group Plc, the world's largest publicly traded hedge-fund firm has seen its net management fee margin drop by a third since the end of 2014, for example.

But money is flowing back into the active space. Man's funds under management reached a record $96 billion by the end of June; Allianz SE reported on Friday that its Pimco unit won a record 52 billion euros ($62 billion) in net inflows in the second quarter. Clearly investors still see a role for active managers in their portfolios -- albeit at lower fees than they were willing to pay for the privilege in the past.

Index trackers, meantime, are starting to acknowledge that with power comes responsibility. "We engage at board level on topics such as the qualifications of directors, the time they have to devote to their duties, on executive pay, on environmental issues," Blackrock Inc. Vice Chairman Barbara Novick in May. "This has nothing to do with the product or the pricing of products."

There's a cost in managers increasing their engagement with the companies they invest in. But with investors increasingly aware of environmental, social and governance issues, they’re likely to be willing to forego a few extra basis points for their passive funds to become that bit less passive.

Passive aggression is understandable when your business is threatened. But don't mistake a revolution for a natural commercial evolution.