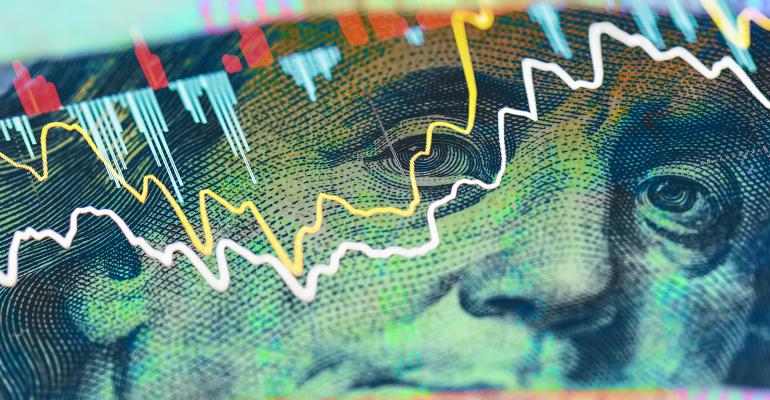 While the greater S&P 500 lost 20% in the first quarter, some multifactor ETFs demonstrated relative performance success. As with all funds, it's what's inside that matters.

The 20% decline in the S&P 500 Index in the first quarter, dragged lower by weakness in March, was an opportunity for those index-based ETFs that combine metrics favored by active managers to shine.

Yet while some multifactor ETFs demonstrated relative performance success, others lagged, serving as a reminder for investors to look inside rather than choosing a fund based on fees or its brand name.

Multifactor ETFs are index-based funds that combine factors, such as lower volatility, momentum, quality, size and value. Unlike Vanguard 500 Index ETF (VOO), which holds all stocks representative of a broad investment style on a market-cap-weighted basis, these alternatively weighted funds have a narrower set of holdings filtered for three or more of these factors. In the past five years, many asset managers launched funds with similar-sounding names that gathered more than $500 million in assets—but how they have performed has been anything but similar, as they are all built differently.

They do, however, share one thing in common: They are relatively inexpensive. The priciest—Invesco Russell 1000 Dynamic Multifactor ETF (OMFL) and John Hancock Multifactor ETF (JHML)—charge just 0.29%, much lower than actively managed mutual funds.

One of the better performing of the U.S. multifactor ETFs was Goldman Sachs ActiveBeta US Large Cap Equity ETF (GSLC). This $6.7 billion fund, which has a modest 0.09% expense ratio, declined 18.8% in the first quarter and 16.0% in March. These returns were narrower than VOO’s 19.6% and 16.2%.

CFRA four-star-rated GSLC is constructed focused on low volatility, momentum, quality and value attributes. The portfolio has similarities to VOO, but the weightings are different. For example, GSLC has a relatively large stake in Walmart (WMT) and a more modest one in Facebook (FB).

GSLC had a higher recent weighting in Consumer Discretionary (12% vs. 10%) and a lower one in Communication Services (9% vs. 11%); Information Technology’s 25% weighting was in line with VOO. In the first quarter of 2020, GSLC pulled in $750 million of net inflows, according to First Bridge Data, a CFRA company.

QUS, which charges a modest 0.15% expense ratio, has a relatively high weighting in Information Technology (28% of assets). Cisco Systems (CSCO) and Intel (INTC) were some of its recently bigger positions. The ETF pulled in a modest $75 million of net inflows in the first quarter, but CFRA has risk-related concerns for the fund that hurt its rating. 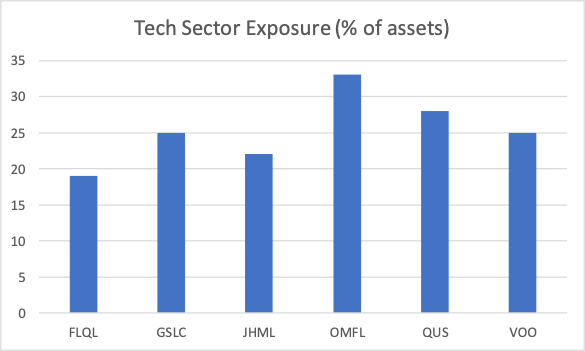 In the fourth quarter of 2019 and in January 2020, FTSE Russell index–based OMFL was positioned for a recovery, favoring size and value, but the fund shifted to contraction positioning in February and March as the index indicated growth was below trend and decelerating. At the factor level, that resulted in momentum, low volatility and quality factors being emphasized. At the end of March, OMFL’s Information Technology weighting was an elevated 33%, with higher stakes in Apple (AAPL) and Microsoft (MSFT) than VOO. OMFL had slight net outflows in the first quarter.

Meanwhile, Franklin LibertyQ US Equity ETF (FLQL), which gathered $249 million of net inflows in the first quarter, and JHML were down 20.8% and 22.2% to start the year, modestly lagging behind VOO. FLQL recently had 19% of assets in Information Technology, while JHML had 22%.

Multifactor ETFs provide a twist on traditional market-cap-weighted index investing. However, what’s inside drove performance in a volatile first quarter and will continue to be a driver of future performance. To learn more about CFRA’s views on multifactor ETFs like the ones listed above and more, visit the ETF tab of MarketScope Advisor.