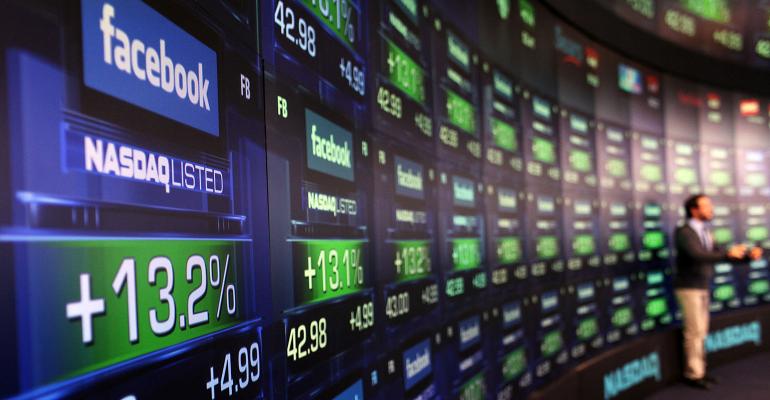 With the late July sell-off of Facebook and a handful of other tech darlings, investors have been reminded that mega-cap stocks can indeed go down in valuation, not just up. Though most ETF assets are invested in market cap-weighted ETFs, various asset managers have been gaining traction with multi-factor ETFs that are constructed based on a stock’s fundamental and technical attributes.

Josh Rogers, a beta specialist at JPMorgan Asset Management explained to CFRA that market cap-weighted indexes have embedded biases that many clients don’t realize. For example, the Russell 1000 Index is heavily weighted to the technology sector and there’s concentration in certain individual stocks. Rogers explained that in contrast a factor-driven portfolio using screens such as value, momentum and quality can add diversification, as well as upside potential. The reduction of exposure to large technology stocks in a non-cap-weighted index reduces much of the harm that comes when those stocks fall.

For example, JPMorgan Diversified Return US Equity (JPUS) had a recent 14 percent weighting in the technology sector, considerably less than the 25 percent for the iShares Russell 1000 Index ETF (IWB). Facebook was the 175th largest holding in JPUS, not the fourth largest as it was for IWB, and the beleaguered internet giant had a smaller weighting than IAC/InterActive Corp, a more moderately sized tech constituent.

Meanwhile, due to its value and quality screening approach, JPUS had more exposure to certain moderately sized stocks including Church & Dwight and McCormick, two of the smaller-weighted stocks in IWB.

In rating JPUS and other equity ETFs, CFRA combines holdings level analysis with fund attributes such as expense ratio and technical analytics. We believe it’s important to focus on an ETF’s prospects, not just at its relative performance record.

Nick Chan, a quantitative investment strategies portfolio manager at Goldman Sachs, explained to CFRA that the appeal of multi-factor ETF strategies stems in part from investor dissatisfaction with active management as it’s hard to beat a benchmark because the mutual fund fees are so high. He added that most of the returns generated by active management are derived from the same factors that can be found in smart beta ETFs.

Goldman Sachs ActiveBeta US Large Cap ETF (GSLC) has gathered $3.6 billion since launching less than 3 years ago in September 2015. The ETF’s appeal includes its 0.09 percent net expense ratio, cheaper than IWB and in line with the SPDR S&P 500 Index ETF (SPY), the first and still largest market cap-weighted ETF. Like JPUS, GSLC includes value, momentum and quality, but also low volatility screens. The ETF had 25 percent of its assets in technology, but a slightly smaller stake in Facebook than IWB.

Meanwhile, consumer discretionary exposure is modestly higher for GSLC than IWB, with top positions including Amazon.com and Home Depot.

When John Hancock MultiFactor Large Cap ETF (JHML) was also launched in September 2015 it was built through a partnership with Dimensional Funds, which offers a variety of actively managed funds. Steve Deroian, head of ETF Strategy at John Hancock, explained to CFRA that the firm conducted extensive due diligence to find the right partner. He further explained that smart beta ETFs employ an active investment process wrapped in a passive vehicle.

Similar to Dimensional’s mutual funds, JHML focuses on smaller size companies with favorable value and profitability metrics.  JHML’s technology exposure was recently 22 percent of assets, but Facebook’s weighting was approximately half the size in IWB. Meanwhile, Intel is a top-10 holding.

While these three firms entered the ETF market in the last 5 years and have had success with multi-factor ETFs, other more established providers are offering appealing and competing products.

iShares Edge MSCI MultiFactor ETF (LRGF) uses value, quality, momentum and small size factors in its construction. Though technology was a recent 26 percent stake, Facebook was not part of the portfolio. Indeed Accenture and Micron Technology were the largest tech holdings.

CFRA reports on these and other multi-factor ETFs on MarketScope Advisor. Each approach is different as is their technology exposure, making a look inside the portfolio meaningful.