Wow! What a week this has been. And it’s not yet over.

Equity investors were cheered by Tuesday’s and Wednesday’s rebound. Many others, however, were left wondering if it was merely a relief rally in a market that’s turned bearish. They have plenty of reasons to fret so.

The chart was certainly looking ominous. First of all, there was that potential double top stretching back to last fall. Its putative failure point—the second top in May—also represented the crown in a head-and-shoulders top formation begun in March. Then there was last week’s double-whammy—the index falling below its 200-day moving average as well as its piercing of the head-and-shoulders pattern’s neckline. With that, it looked like the market was setting up for a test near the 2,650 level. 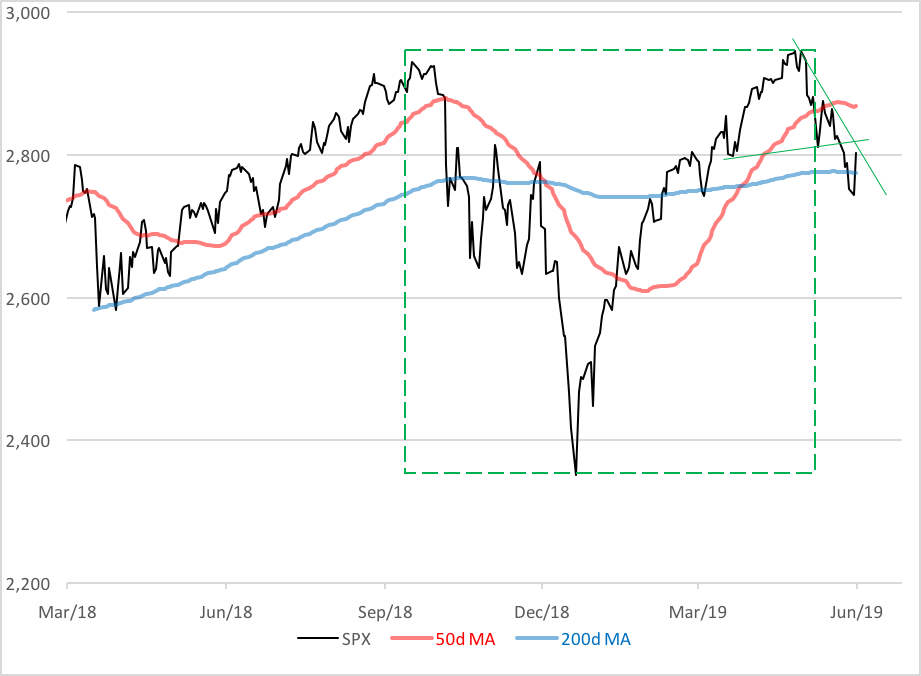 The index has since bounced back above its 200-day average but still remains below the neckline, which now represents a resistance area. Savvy investors are likely to use rallies to this level as selling or hedging opportunities. Obviously, traders convinced of a bear market’s inevitability will likely unload stocks, but others who can’t sell will be shopping for beta- or delta- neutralizing strategies.

For those investors with no room in their portfolio for significant reallocations, delta can be managed on the cheap with protective collars or put spreads.

A collar’s built by purchasing S&P 500 (SPX) put options, financed by the simultaneous sale of calls with the same expiration date. The strategy offers the functional equivalence of a short SPX futures position—open-ended gains in a market decline and unlimited loss in a runaway bull market (offset, of course, by the appreciation in the investors’ long stock positions).

Long put spreads—and especially spreads done in ratio—are another set of low- or no-cost strategies that can capitalize on volatility spikes and lower S&P 500 prices. In a ratio spread, one put is shorted while two puts with lower exercise prices are purchased. All options share the same expiration date. In an extreme decline, the position behaves like a short SPX futures hedge.

Keep in mind, it’s still early days for bear market talk. The double top won’t actually be confirmed until the December low under 2,400 is taken out. By then—IF then—of course, hedging could be a lot more expensive.