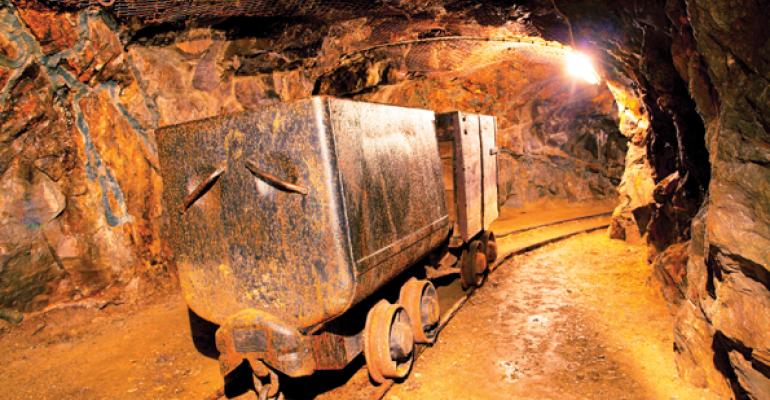 Most Popular Mining ETF to Widen Holdings on `Curse of Success'

Popularity comes with a price.

(Bloomberg) --The world’s second-largest exchange-traded fund linked to material producers has become the victim of its own success.

With investors piling in amid a precious-metals recovery, VanEck Vectors Junior Gold Miners ETF’s assets jumped 60 percent to $5.54 billion this year. That created a dilemma for the fund that tracks the MVIS Junior Gold Miners Index, as its holdings surge above 10 percent of some of the companies it owns.

On Thursday, MVIS Index Solutions, a VanEck company, announced changes to its equity indexes, widening the criteria for inclusion into the gauge that is tracked by VanEck’s junior gold miner ETF.

“This is the curse of success,” said Sameer Samana, a St. Louis-based global quantitative strategist at Wells Fargo Investment Institute, which oversees $1.8 trillion. “They’re starting to run into issues of how much they own in certain names, how many names qualify for the index and they’re running into issues of how big the fund has gotten.” Investors poured $1.5 billion into VanEck Vectors’ junior miner ETF this year, the most among global peers tracked by Bloomberg. Assets in the most popular mining ETF, which trades under the ticker GDXJ, climbed amid rising interest in small companies as large producers emerging form the downturn scout for new reserves.

The ETF was growing so fast it was in danger of having the kind of stakes in some junior miners more usually associated with large institutional or activist investors. That, in turn, could be an issue for individual shareholders who might worry such large “passive” holdings could ease pressure on boards around corporate governance,  Eric Balchunas, an ETF analyst for Bloomberg Intelligence, said by telephone.

GDXJ invests at least 80 percent of its total assets in securities in the MVIS Junior Gold Miners Index, giving it enough wiggle room to add other companies. Its third-largest holding is VanEck Vectors Gold Miners ETF, which trades under the ticker GDX and tracks the NYSE Arca Gold Miners Index.

“The index provider is loosening the criteria and making it more inclusive in order to deal with the liquidity and capacity issues,” Samana said by telephone.

Chris Sullivan, a spokesman of VanEck Vectors with MacMillan Communications, declined to comment beyond the MVIS statement on the index change.

Alamos Gold Inc., a Toronto-based gold producer that operates mines in Canada, Mexico and the U.S. is GDXJ’s biggest holding, where it has a 13 percent stake, according to data as of March 17 compiled by Bloomberg.

That’s still well below the 20 percent threshold that would trigger a public tender under Canadian rules. However, the total holdings of all funds under parent company VanEck Associates Corp. is already at 20.6 percent, the data show.

GDXJ’s situation isn’t that common. Gold mining is a specialized sub-industry within the materials sector, and GDXJ has been limited to the small players in that space, making it easy for the fund to acquire bigger stakes as money piles in, Samana said.

"Generally, I’ve not seen this takeover bid issue arise in Canada,” Andrew Aziz, a partner at the law firm Osler, Hoskin & Harcourt LLP, said by telephone from Toronto. "It does not happen often at all because ETFs were started on the basis of tracking a broad market index like an S&P or a TSX 60 where they’re all large companies."

Over the past 12 months, GDXJ has surged 15 percent, outperforming VanEck Vectors Gold Miners, which tracks bigger producers of the metal. GDXJ’s holdings include small miners listed in countries such as Australia, China and the U.S.

“It’s unbelievable how popular it is,” Balchunas said, noting that its outperfomance hasn’t come with a large difference in volatility. “It just seems to have extra pop and juice when things go well."

A gauge of 15 large global gold producers is little changed in the past year while a separate Bloomberg Intelligence index of smaller miners gained 26 percent. But while juniors such as QMX Gold Corp. and Kaz Minerals Plc have more than doubled in value in that period, others such as Primero Mining Corp. and Carbine Resources Ltd. have tumbled.

“This is a broad perception that ETFs are the easy way to invest in a theme without devoting the time and effort to analyze the individual component firms,” said Alan Gayle, a senior strategist who helps oversee $42 billion in assets at RidgeWorth Investments in Atlanta. “As ETFs penetrate smaller and more specialized themes, they run the risk of actually distorting the market they are trying to mimic.”