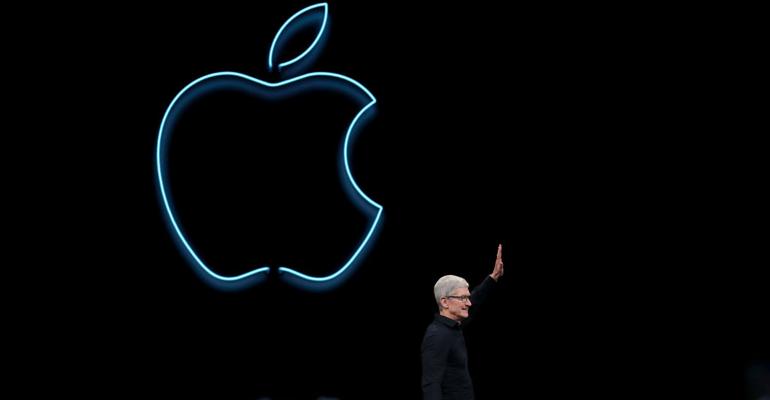 There are more than 300 ETFs that own a stake in Apple, with over 200 equity ETFs holding a top-10 position.

CFRA reiterated a Buy recommendation of Apple shares ahead of the product release event today. CFRA Equity Analyst Angelo Zino expects Apple to unveil its next-generation iPhone (iPhone 13), Apple Watch Series 7, and potentially AirPods 3. Zino thinks the iPhone 13 will look very similar to the 2020 models, with four devices in the same size, with potentially a smaller notch at the top being the only design change. However, internal upgrades will include a faster A15 processor, a new 5G modem chip, camera enhancements and better battery life. Zino notes that the Apple Watch Series 7 is seen as having some changes to the aesthetics, likely including smaller bezels and a flat-edged design. The new AirPods will look like the AirPods Pro but without Active Noise Cancellation so Apple can sell them at a lower price point. Zino believes AAPL's pricing strategy for all devices will be closely watched and while he does not forecast any major increases, it is possible given rising costs. CFRA expects the iPhone 13 will return to its typical late September release, with easy comparisons in the September and December quarters given pandemic delays a year ago. Despite a strong run since June, Zino still thinks Apple shares are appealing.

There are 320 U.S. listed ETFs that own shares of AAPL, with 220 equity ETFs rated by CFRA holding a top-10 position. Considering its $2.5 trillion market capitalization, Apple plays a key role in many index ETFs. Many of the largest U.S. and global broad market equity ETFs are cap-weighted, meaning the fund holds more of the largest companies. For example, Apple is the top position in SPDR S&P 500 ETF (SPY) (6.2% of assets), in iShares Russell 1000 ETF (IWB) (5.5%), and in Vanguard Total World ETF (VT) (3%). However, the stock is even more dominant in growth- and technology-focused ETFs.

Apple is a double-digit weighting in many growth-style and technology sector ETFs. For example, iShares S&P 500 Growth ETF (IVW), Invesco QQQ (QQQ), and iShares Russell 1000 Growth ETF (IWF) have between 10% and 11% of assets in Apple by either removing names with value traits or focusing on just what stocks are listed on the Nasdaq. Meanwhile, iShares Russell Top 200 Growth (IWY) and Vanguard Mega Cap Growth (MGK) have even more dependence on Apple, with 13% and 12% weights, respectively, as these funds are focused on only the largest companies.

However, Technology Select Sector SPDR (XLK) and Vanguard Information Technology ETF (VGT) are examples that each have 20% or more of fund assets in Apple. The differences between these cap-weighted sector ETFs stem from VGT’s inclusion of small- and mid-cap stocks, but those positions represent a small percentage of fund assets.

Apple appears in many other smart-beta ETFs based on its fundamentals and/or valuation attributes. Apple is a top-10 position in some value ETFs, such as JPMorgan US Value Factor ETF (JVAL); quality ETFs, such as Invesco S&P 500 Quality ETF (SPHQ); dividend ETFs, such as WisdomTree U.S. Large Cap Dividend ETF (DLN); and low volatility ETFs such as Fidelity Low Volatility ETF (FDLO). In addition, Apple can be found inside multi-factor ETFs, such as iShares Edge MSCI Multifactor ETF (LRGF).

While thematic ETFs are designed to be different than sector ETFs, Apple is inside some too. Global X Autonomous & Electric Vehicles ETF (DRIV) and Goldman Sachs Innovate Equity ETF (GINN) are a couple examples where investors can find Apple alongside more moderately sized companies with long-term potential. However, the weighting in Apple is relatively small compared with technology sector ETFs.

CFRA believes what is inside an ETF is a key driver of its future performance. While many think they understand what they own, Apple can be found in many more strategies than are realized. Our bullish view on the stock contributes favorably to these ETFs, but analysis of other holdings, as well as fund attributes, contribute to our star ratings.