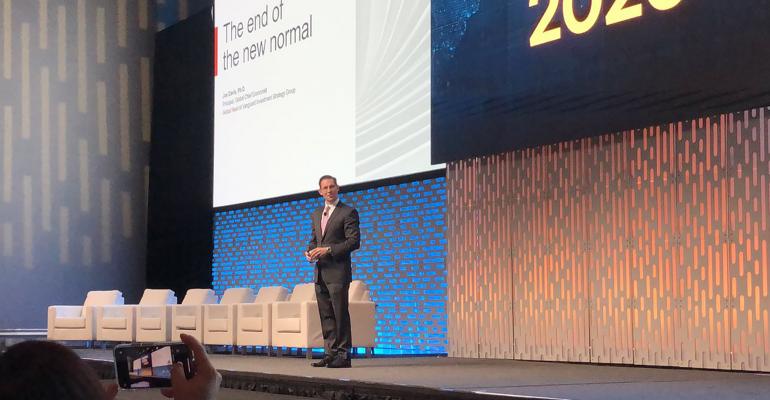 Joe Davis' innovation index has surged in the past 18 months. That's a good sign for the U.S. economy.

The low rate of productivity growth that is largely responsible for the stagnant U.S. economic growth of the past 10 years is now headed in the opposite direction, says Joe Davis, chief economist at Vanguard.

And that shift should help push economic growth above the 2% annual rate that has prevailed since the Great Recession ended in 2009, he said at the Inside ETFs conference in Hollywood, Fla.

Related: The State of ETFs 2020: Real Advice Is Your Grand Challenge

Davis and his colleagues have put together a leading indicator of innovation that he said paints an encouraging picture. The team analyzed data from 2 billion records related to all the ideas it could find around the world.

The index measures the “idea multiplier”—how many additional ideas come out of one good idea. The multiplier rose from 40 in 1980 to 200 in 2003, boosted by the growth of computer usage and the Internet.

Since 2003, it had been stuck at that level. “This said in 2003 that a new normal was coming,” Davis said. That new normal is what a Harvard economist has called secular stagnation—low growth, low inflation, low interest rates and soaring financial markets, many analysts say.

Then in the past 18 months, the innovation index has surged to 400, Davis said.

He offered several reasons for the rebound. First, “the exchange of ideas across borders and fields accelerated,” he said. And the big difference has been China’s contribution.

“More important is that the building blocks of technology are smashing together,” Davis said. That includes the cloud, artificial intelligence and machine learning. And those areas provide a boost for industries far afield from technology, he noted.

The fourth area trumps the first three combined: health care, particularly genetics, Davis said. That sector has an idea multiplier of more than 3,000.

This is all good news for the economy, Davis said. But it won’t shift upward on a dime. “This won’t happen today, but for the next decade, the outlook is better than we expect,” he said. “I don’t think we’ll face stagnation for the long term.

Davis also believes that value stocks, which have lagged growth over the past 10 years, will stage a renaissance.

“There’s new competition, more new companies and more investment opportunities,” he said. But large companies may suffer, as smaller ones disrupt their business, he said.