It Takes Two to Contango

No doubt about it: the Covid-19 outbreak has wreaked havoc on worldwide markets. While demand surges, albeit raggedly, for safe haven assets such as gold, equities have been slammed. A double whammy has been dished on the oil market, which was already weighed down by a global glut. We saw a key indication of oversupply back on January 30 when the futures curve for domestic light crude oil flipped into contango.

A contango exists when a deferred delivery is priced higher than a nearby contract. On January 30, for example, while February futures were priced at $52.14, May Nymex crude settled at $52.23, creating a 9 cent per barrel contango. The price spread ordinarily is made up of storage and insurance costs, together with the interest needed to carry the cargo to the deferred delivery date. For a storable commodity like oil, contango develops when there’s surplus; its opposite, backwardation, arises when supplies are tight.

As Russia and Saudi Arabia pump and dump oil, crude’s contango has widened while per-barrel receipts have shrunk. The spot price for Cushing-delivered crude has slumped to $20.09, but the three-month contango has ballooned to $9.47. It’s certainly not a rise in the cost of money that accounts for the inflation in carrying costs, nor is it insurance charges. The cost of storage has risen because of limited capacity.

Contrast this scenario with the gold market. Since January 30, Comex spot gold has lurched ahead about 2% while its representative one-year contango shrunk a whopping 86%. Again, we can’t lay the blame for contango shrinkage directly on interest rates. Clearly, there’s a difference in demand between gold and oil.

You can see contango’s impact reflected in the prices of gold and oil ETFs.

Over 12 months—February 2019 through February 2020—the United States Oil Fund (NYSE Arca: USO) underperformed its younger sibling, the United States 12-Month Oil Fund (NYSE Arca: USL), by 4.37 percentage points. USO tracks front-month oil futures while USL’s attempts to minimize the negative roll yield associated with contango by spreading exposure over 12 nearby oil contracts. Break down the funds’ relative performance into discrete segments and you’ll see how the oil glut flipped the switch. For the nine-month period ending in February, USL fared worse than USO by 5.60 percentage points; for the three-month span through February, though, USL bettered USO by 4.82 percentage points. 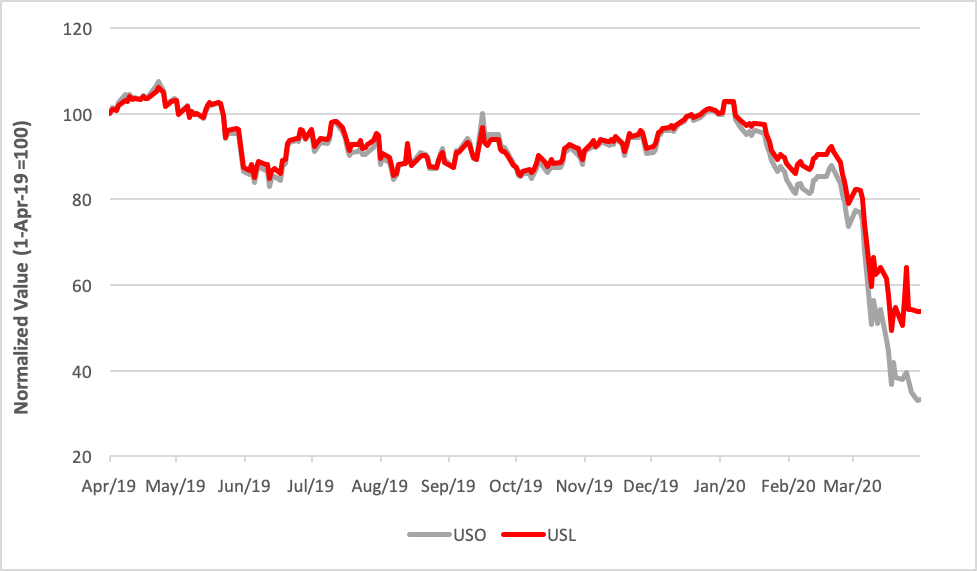 An opposite effect is on exhibit in the gold market. The best-known gold fund is the bullion-backed SPDR Gold Shares Trust (NYSE Arca: GLD), a proxy for spot pricing. A futures-based ETF, the Invesco DB Gold Fund (NYSE Arca: DGL), tracks an index of contracts, minimizing contango with a proprietary optimizer that selects roll targets based on the shape of the futures curve. For the 12 months ending in February, GLD outdid DGL by 1.55 percentage points. To see contango’s momentum, note that GLD’s performance advantage was 2.34 percentage points in the nine-month period winding up in February; for the most recent three-month cycle, GLD’s edge had narrowed to just 82 basis points. 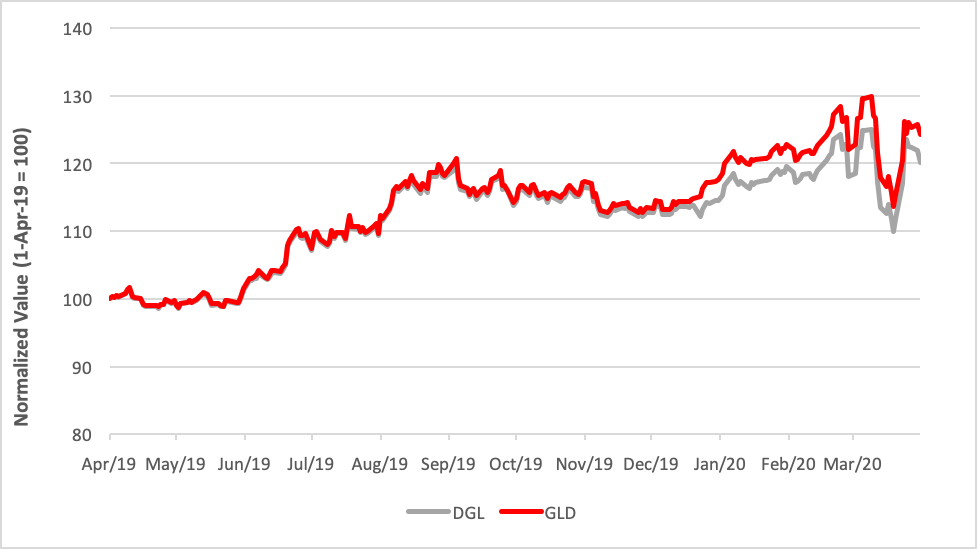 When considering gold and oil, there are a couple of points to keep in mind. First and foremost, gold futures are in a near-permanent state of contango because of constant above-ground supplies. Gold isn’t consumed like oil is. Virtually all the gold ever mined is still with us in one form or another. Gold gets recycled and that keeps a lid on the futures curve. Contango may widen and narrow to a degree based on exogenous factors but hardly ever evaporates completely.

Oil’s a very different market. Crude supplies are not entirely above ground. Crude production, too, is readily consumed. As a consequence, oil futures swing from backwardation to contango in sync with economic cycles.

The upshot of all this? At some point, our present crisis will pass. Oil will find a bottom and its contango will stabilize and begin to shrink. When oil prices begin to claw back their losses, USO, rather than USL, will be the beneficiary.

And what of gold futures? Monetary policy will likely be the primary driver of bullion prices and the shape of the futures curve. Given the market’s built-in governor, grantor trusts like GLD remain the go-to vehicle as a liquid alternative to gold itself.