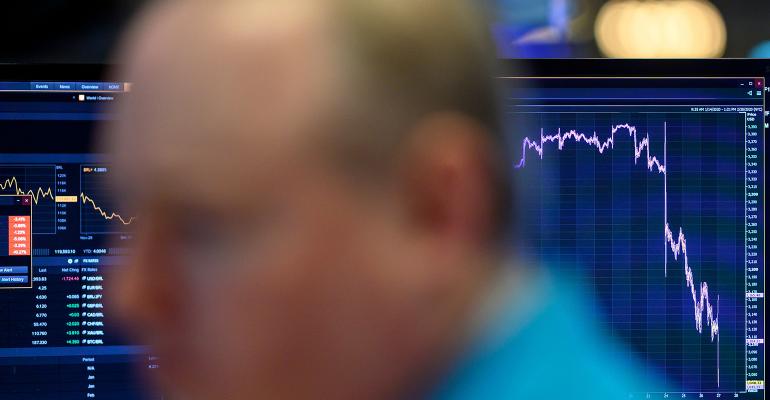 After wild swings in stocks, a market correction is finally here.

(Bloomberg) -- The brutal sell-off in stocks has investors fleeing the world’s largest exchange-traded fund at a rate not seen since the rout in February 2018.

The $279 billion SPDR S&P 500 ETF Trust, which tracks the American equity benchmark, has seen about $13 billion of outflows since Friday and is headed for its biggest weekly drawdown in two years, according to data compiled by Bloomberg. Back then, the S&P 500 Index plunged, creating the biggest-ever volatility spike in an event that came to be known as “Volmageddon.”

After wild swings in stocks, a market correction is finally here. The six-day slide pushed the S&P 500 and Dow Jones Industrial Average down by 10% from all-time highs. The rapid spread of the coronavirus has made equity strategists at Goldman Sachs Group Inc. slash their outlook for U.S. companies’ profit growth to zero this year on concern the epidemic will erode revenue and dent the global economy.

The velocity of the rout has investors questioning whether this is another buying opportunity during the 11-year bull market or the beginning of its end. For now, ETF flows suggest fear is climbing that it’s the latter.

“There’s a lot of fear given the unknowns,” said Todd Rosenbluth, CFRA Research’s New York-based director of ETF research. “If we have a prolonged period of uncertainty, I would expect outflows to continue. If you have a short time horizon, then selling first and asking questions later may make more sense.”

Investors withdrew $3.12 billion from State Street’s SPY, as the fund is known, on Wednesday -- reducing its assets to the smallest size since October, according to data compiled by Bloomberg. It was the fourth straight day of outflows, totaling $18.7 billion. The fund has suffered withdrawals of $13.3 billion in the past year.